In week one, we knew that Yasiel Puig could hit a baseball well over 400 feet, that he could cover the outside part of the plate, that he could throw from the warning track in right field to first base on the fly. We also knew that it would take a while to find out what he was. His obvious tools and talent were only part of the picture. His weaknesses were just as important, but they took more time to get a feel for. Tim Hudson spoke for all of us when he said, “We’ll see how he does six or eight weeks into the season, see what kind of adjustments people make to him and he makes to them.”

It’s now been nine weeks since Hudson said “we’ll see,” and 10 weeks since Puig made his major-league debut. We’ve watched pitchers adjust to Puig, and Puig adjust to pitchers. And while we’re still in small-sample territory, we can start to say with more certainty what kind of player Puig will be.

Puig played his 60th game on Sunday. If we divide his season into three 20-game, 80-plus-plate-appearance chunks—which is somewhat arbitrary, but still works well for the purposes of this piece—we get a hype-generating hot streak followed by a slump and then a big rebound.

That’s the SparkNotes summary of Puig’s season, but the details are the compelling part. In Puig’s first 20-game stretch, he struck out 17 times and walked just three times (and one of the walks was intentional). No player has ever qualified for a batting title and hit over .300 with a strikeout-to-walk ratio that high, so it was clear that a massive correction was coming (unless, perhaps, he was young and malleable enough to make changes). Puig’s hot hitting coupled with poor plate discipline made for frightening comparisons to Jeff Francoeur, who became a sensation after a blistering first four weeks in 2005 and has been disappointing people ever since. Francoeur hit .406/.414/.812 in his first 20 games while striking out 14 times without a walk, then went .261/.309/.452 the rest of the way. He’s been worth 2.2 WARP since his rookie season.

Puig’s first-period plate discipline stats and pitch-type distribution were those of a potent but impatient hitter who hadn’t been around the league long enough for the secret to exploiting him to circulate:

Puig’s opponents were feeding him plenty of fastballs and pitching him in the zone only a little less often than average. Puig, for his part, was swinging at every pitch he could reach and many he couldn’t come close to. His swing rate over that span would rank behind only A.J. Pierzynski, Adam Jones, and Delmon Young among full-season players. It was working, but the success seemed unsustainable.

Over the next few weeks, Puig, having been so successful, stuck with what worked. Pitchers, having been punished, decided to do something different:

Puig’s zone rate dropped precipitously in the second 20-game stretch; even Pablo Sandoval, who has the league’s lowest zone rate this season, sees more strikes than he did during this time. He also stopped seeing fastballs so often, as pitchers mixed in more curveballs and sliders. Despite seeing far fewer strikes, he swung almost as often, and not surprisingly, he missed much more. Now his approach wasn’t working, and it seemed unlikely to lead to further success.

From July 5-7, Puig faced the Giants for the second time. He saw 28 sliders in 51 pitches, and he swung at 16 of them, many of them way outside of the strike zone:

He struck out seven times in 13-at bats. One of those strikeouts came on four straight sliders from Sergio Romo:

Romo missed his target on the last pitch, but this is where Posey wanted it: 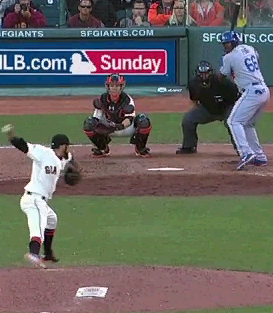 Posey’s glove is a home plate’s width off home plate. “Good plate coverage” doesn’t begin to help here. The only solution is not swinging. As Don Mattingly put it,

One team did something to him, and it wasn't long before the next team tried it, and it worked again, and everybody was doing it, just like that. They watch tape, they'd see what happened. It shows on the computer stuff, it shows what he's swinging and missing at. Then you see everybody trying it, until he leaves it alone, then they have to go somewhere different.

The question was whether he would ever leave it alone. Puig had 58 at-bats in spring training and didn’t walk once. He did walk 15 times in 167 plate appearances for Chattanooga before he joined the Dodgers, but three of those walks were intentional, and there’s no telling how many of the other 12 were the result of Double-A pitchers not wanting to throw him strikes. Plate discipline is difficult to learn; just ask Jeff Francoeur, who’s spent plenty of time trying.

But that doesn’t appear to be a permanent problem for Puig. Here are his stats over the last 20 games, running from July 21st through yesterday (with the first two stretches included for reference):

The zone rate is still low, but Puig has stopped chasing so much. His O_Swing rate is lower than it was early on, and his contact rate is back up to about the same level. A couple weeks after the San Francisco series, Toronto tried the same thing, tempting Puig with sliders outside the strike zone. This time it didn’t work so well:

Since Puig isn’t offering at deliveries out of the zone, pitchers have already given up on the all-breaking-ball strategy, going back to throwing him heaters as often as they were when he was still an unknown. This is a 10-game rolling average of the pitch types Puig has seen, showing the increase and subsequent decrease in breaking ball rate: 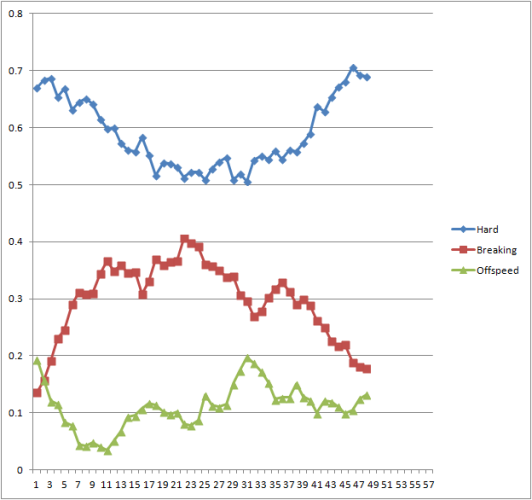 And this is a 10-game rolling average of Puig’s whiff rate by pitch type, which explains the change in pitch distribution:

Early in the year, Puig was swinging through breaking balls at an elevated rate. Now he’s not, since he’s no longer chasing the unhittable ones, and so pitchers have adjusted by throwing fewer of them. Instead they’ve decided to pound him far inside with fastballs, hoping to keep him from extending his long arms, take advantage of his long swing, and suppress his opposite-field power. Here are his fastball locations in Period 1 (left) vs. Period 3 (right): 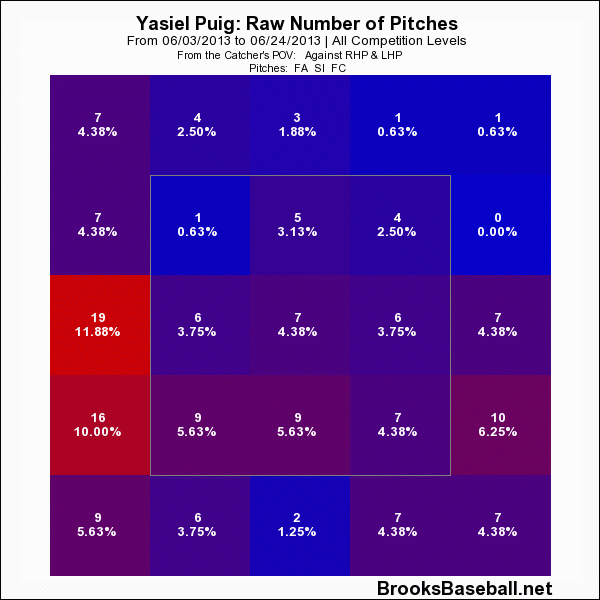 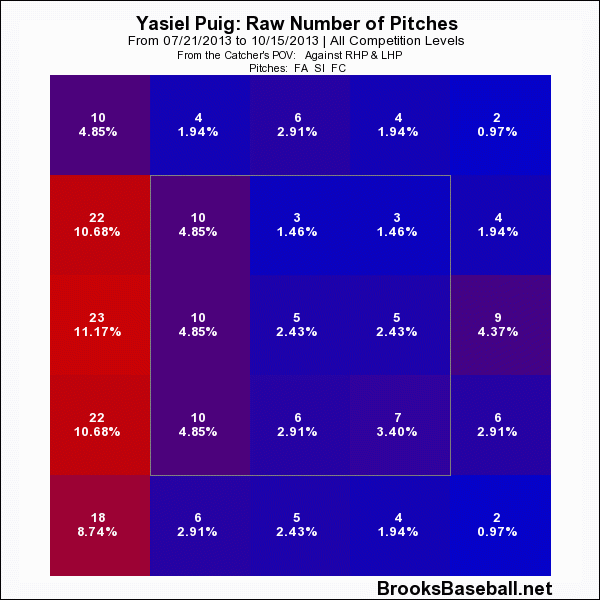 "He's making adjustments," Mattingly told Chad Thornburg. "It's a cat-and-mouse game all the time with the guys like him. You're going to see pitchers try things. If it works, they're going to keep trying it. If it doesn't work, they'll try something else.”

They should probably be brainstorming something else already. The transition back to fastballs hasn’t hurt Puig. He’s hitting again, and just as encouragingly, his K:BB has normalized. In the third 20-game chunk, Puig walked 16 times against 20 whiffs. Granted, five of those walks were intentional, four of them coming against the Rays over the weekend. But you don’t put a hitter on base on purpose if you think you can get him out with waste pitches, so Puig’s free passes reflect his opponents’ recognition of the adjustments he’s made.

Suddenly the Francoeur comp seems more silly than scary. Francoeur has never walked 11 times in a 10-game stretch, as Puig now has, and he didn’t come close to doing so in his rookie season. What’s really scary, and also exciting, is how quickly Puig altered his approach to correct a pattern that wasn’t working. Your move, major leagues.

We still don’t know what Puig will look like as a finished product. Sixty games is still too short a time to come to a conclusion, especially since we’re subdividing the 60 into even smaller groups. And even if Puig’s approach remains strong, his BABIP will dip and take his slash line with it. But Puig had to make these adjustments to have any hope of becoming the monster he looked like early on, and he’s passed that important test. Now we can add another tool to the list: adaptability.

Thanks to Andrew Koo and Dan Brooks for research assistance.

You need to be logged in to comment. Login or Subscribe
hyprvypr
.300/.340/.550 guy at his peak is this novice's guess. A damn fine hitter, not including the rest of the tools.
Reply to hyprvypr
NYYanks826
That's pretty much Adrian Beltre in his non-Seattle years. Definitely a star.
Reply to NYYanks826
AZMarkS
.301/.330/.422 was his slump? There are many OF who would love to have those stats.
Reply to AZMarkS
bornyank1
Well, that was the worst of the three 20-game stretches, yeah--I could've isolated parts of that period to make it sound worse. But the point (I think) is that the .301/.330/.422 line came with a .407 BABIP and the kind of K:BB ratio that makes it essentially impossible to sustain a .300 average. So if he hadn't improved his approach, things could've gotten considerably uglier once luck went against him.
Reply to bornyank1
jfranco77
If Joe Maddon (and/or the Rays' braintrust) thinks he's good enough to justify 4 IBBs in a series, that says a hell of a lot about this kid.
Reply to jfranco77
lipitorkid
I no longer need Christmas. As a 14 team keeper league Puig owner I feel "slightly" (and only slightly) better about dumping Trout back into our draft pool two years ago. Great article.
Reply to lipitorkid
bornyank1
You should still feel terrible about Trout
Reply to bornyank1
alextushingham
1 Man, 6 Tools
Reply to alextushingham