The Weekend Takeaway
As former Yankees beat writer Pete Abraham pointed out on Twitter yesterday afternoon, sometimes a series of hiccups can remind us of a player’s greatness. Fortunately for the team Abraham covered before moving to the Boston Globe, Mariano Rivera’s hiccups this weekend merely delayed victories instead of costing them games.

Despite flubbing a save opportunity on August 7 in a one-run contest that the Yankees ultimately dropped to the White Sox, Rivera sported a 1.70 ERA, remarkable for a 43-year-old pitcher in his 18th big-league season. That hiccup was his third blown chance of the year, and heading into Friday’s opener against the Tigers, he still had permitted only two home runs in 42 1/3 innings of work.

Then, with Austin Jackson on second, two out in the bottom of the ninth, and the Yankees up 3-1, Miguel Cabrera came along and did this:

Rivera had Cabrera on the ropes and in pain, the result of two inside cutters that the third baseman fouled off his knee and leg. But he made a rare mistake, a cutter that started near the inside corner and worked back toward Broadway, and Cabrera sent it a mile to dead center to tie the game.

All was well for the Yankees, who won that game on a walk-off single by Brett Gardner in the bottom of the 10th, but Rivera and Cabrera would meet again less than 48 hours later. And the result would be the same.

This time, Cabrera dug in as the leadoff man in the ninth, with the Yankees ahead 4-2. He could not tie the game, but he was more than content to set the stage for a teammate to do so. With another two-strike count, Rivera went to the same outer-third location in which he had induced a swing-through on the first pitch of that at-bat. But Cabrera did not miss this one; instead, he sent it into the right-center field bleachers to draw the Tigers to within one. Two batters later, Victor Martinez blasted a towering second-decker to knot the tally at four apiece.

Gardner came to Rivera’s rescue once more, thumping a walk-off solo shot off of Jose Veras in the bottom of the ninth to send the crowd home happy. But Rivera’s armor had been cracked. After looking nearly immortal for the first four months of his farewell tour, he had been made to look human.

Prior to this weekend, Rivera had never blown three consecutive save opportunities in his career, and he had only twice given up two home runs in a relief appearance. And as Sam Miller tweeted, only a select foursome (Aubrey Huff, Evan Longoria, Edgar Martinez, and Rafael Palmeiro) could claim to have hit two big flies off of Rivera. Now that club has a fifth member, who earned his membership card within one series.

Even with this blip, Rivera retains his place among the game’s elite active closers. He is a respectable 35-for-40 in save opportunities and boasts a 2.44 ERA and 41-to-8 K:BB through 44 1/3 innings of work. Few pitchers have successfully tamed Cabrera’s bat in recent days—his OPS in August is north of 1.300, and he has homered four times in five games, including one in Saturday’s middle match—and Rivera simply became the latest to incur his wrath.

More than anything, the attention paid to the three-blown-save rut highlights Rivera’s longevity as one of the best in the league. The last Yankees reliever to cough up three straight save chances was Kyle Farnsworth, who did it while Rivera was battling lower-back spasms in 2006. Rafael Soriano fared much better, going 42-for-46 in Rivera’s stead last year. Following Rivera won’t be easy, and his replacement probably won’t be as automatic. Just as Rivera’s failures last week served as a reminder of his greatness, so too will those of his successor(s) in 2014 and beyond.

Friday’s Matchup in Review
The Royals got the last laugh in their series opener against the Red Sox, defeating Boston by a final score of 9-6, but Ervin Santana did little to contribute to their winning effort. The right-hander lasted only 3 2/3 innings and permitted six runs on nine hits, two of them by David Ortiz, his counterpart in Friday’s highlighted matchup.

Ortiz entered the game 10-for-31 lifetime versus Santana with five extra-base hits and four walks, but 13 of the 21 outs he had made were strikeouts. Unfortunately for the right-hander, his stuff wasn’t fooling anyone—Ortiz least of all—in this one.

As I wrote in the preview, Ortiz is most dangerous when he gets his arms extended; he has hammered fastballs in just about every part of the zone this year, except up and in. That’s where Santana went in the first inning to coax a fly ball that was corralled by David Lough in foul territory. It was the only time in three encounters that he retired Ortiz.

In the third inning, Ortiz worked a full count, and Santana tried to fool him with a slider. The trouble was, he missed George Kottaras’ knee-high target and hung it at the belt, near the middle of the plate. Ortiz whacked it over the right-center-field fence and onto the Pepsi Porch for his fourth career blast off Santana.

The two matched wits again an inning later, and Ortiz—cheated by the umpire into an 0-1 count—made Santana work once more, fighting until the righty committed another location error. Ortiz spoiled pitch four, a fastball in the up-and-in cold zone, and showed a keen eye to watch pitch five for ball two (with a nod to home-plate ump Hunter Wendelstedt, who was less generous with the inside corner than the outside boundary). Two pitches later, he got one down the middle and lined it into right field for a single. Two batters later, Santana was heading for the showers.

Ortiz made outs in his next two trips to the box, finishing the night 2-for-5, but he is now 12-for-34 versus Santana.

Matchup of the Day

Update (2:22 p.m. ET): With Altuve out of the Astros' starting lineup, keep an eye on Matt Dominguez, who has homered twice in six career at-bats versus Darvish. Both long balls came on inner-third pitches, the first on an elevated sinker and the second on a thigh-high cutter. Dominguez has also struck out three times versus Darvish, two of them on breaking pitches, including one where he chased a curveball that bounced outside and in front of the plate.

Yu Darvish’s most recent meeting with the Astros did not go nearly as well as his first. The right-hander was almost perfect on Opening Day, when he permitted just one hit in 8 2/3 innings and struck out 14, but on July 6, the Astros tagged him for five runs in six frames in which he walked four and struck out six. Tonight, Darvish will take on Bo Porter’s team for the fourth time, and one key to avenging his defeat last month will be continuing his success in keeping leadoff man Jose Altuve off the basepaths.

Of the 21 pitchers that Altuve has faced at least 11 times, only Darvish has managed to keep the second baseman hitless. The 23-year-old Altuve is 0-for-12 lifetime against Darvish with two walks and five strikeouts, a 14-plate-appearance track record that dates back to June 15, 2012. 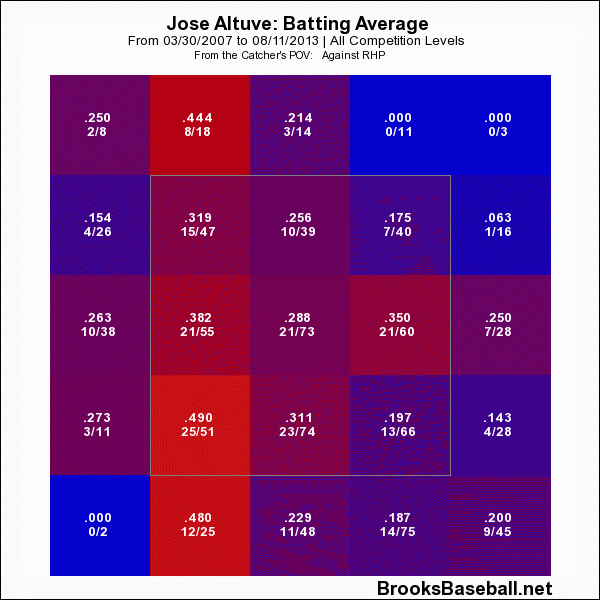 Altuve, who bats right-handed, has two obvious cold zones in his swing against like-handed pitchers: up and away, and down and away. He thrives on the inner third and covers the middle decently well, but most locations farther from him than that are safe for pitchers. 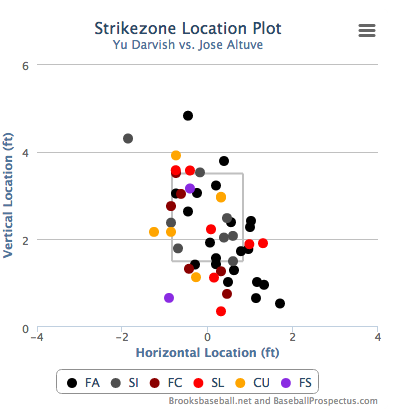 With a deep arsenal of pitches at his disposal, Darvish has homed in on the down-and-away weak spot, peppering it with fastballs, sinkers, and sliders, while also tempting Altuve to chase below the knees. On top of that, Darvish, who turns 27 on Friday, has kept Altuve guessing by mixing up his first pitches: within the 14-plate-appearance sample, he has used six different openers. In Altuve’s third and final showdown with Darvish on July 6, the right-hander threw two splitters—the first two splitters that Altuve had ever seen from him.

Now, Altuve has seen all that Darvish has to offer, though he certainly doesn’t know what’s coming. Darvish has twice (one, two) punched Altuve out with four consecutive fastballs, and in both of those trips to the box, Altuve did not lift the bat off his shoulder. Altuve has also gone down hacking at the slider and buckling on a curveball that dotted the inside corner. The history between them may be growing, but Altuve remains behind the eight ball when it comes to figuring out what Darvish will throw first and how he will attempt to put him away (2:10 p.m. ET).