Here is a fun fact you might have seen recently: Wil Myers leads the American League in OPS since the All-Star Game. Myers entered Sunday night's game hitting .403/.479/.694 in the second half—a line comprising the final 16 games of his just-ended 22-game on-base streak, as well as five of his seven consecutive multi-hit games—edging Mike Trout's .361/.525/.611 effort for the distinction, and adding fuel to the hype machine.

Of course the lead stat is contrived and built from a small sample and arbitrary endpoints. Nonetheless, a player, especially a 22-year-old rookie, outhitting Trout for a few weeks at a time is now newsworthy. Myers deserves some refocused attention anyhow; he's improved on an average first month while showing a better understanding of hitting than anticipated. He may be young and inexperienced, but neither attribute is evident in his game.

Everyone expected Myers to put forth big power displays. Jason Parks graded his power potential as a 6 in his offseason report, citing "excellent raw strength" as reason to believe he could hit 25-plus home runs per season. The body looks the part; Myers is tall and slender with sinewy arms. His bottom half is thicker than his top, and is less involved in the swing. He still generates impressive bat speed with obvious leverage in the swing. Altogether the package has led to numerous Dale Murphy comparisons—some, invariably, based on similar backgrounds, body types, jaw lines, and hair styles—and hard contact.

In addition to the quality of Myers' batted balls, the spread in location has also impressed. Rather than going to the plate pull-happy, Myers has shown a feel for the whole field. Of his 55 hits, 22 have gone to left field, while the majority have gone back up the middle. Diversity in location extends to his home runs, too. Four have gone to left field, one to dead center, and three more to right field, including his first—a wall-scraping grand slam against CC Sabathia at Yankees Stadium.

But perhaps most impressive was a sequence during his first big-league series versus Alex Wilson. Myers fell behind 0-2 after taking a fastball for a strike and swinging over a slider down and away. Wilson—whose average fastball this season clocks in at about 93 mph—went back to the heat to end the at-bat, but threw his pitch further over the plate and higher in the zone than he intended. Myers reached out with those long arms and lined the 95 mph offering into right-center for his first career double: 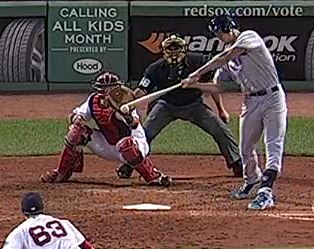 The scene felt as though it came direct from Joe Maddon's manuscript on healthy two-strike approaches. To wit, Maddon told Prospectus some six years ago, "I think that by not looking fastball, and thinking soft instead, when you get something hard you basically have no chance. I also think that when you’re looking middle/in, and the pitcher goes away, you basically have no chance." Maddon, who served as hitting coach and coordinator in the past, isn't the only believer in the hard-away approach. Tony Gwynn detailed a similar philosophy in George F. Will's Men at Work: "If you are looking for the ball away, you can still react on the ball in. But if you are looking for the ball in and they throw away, you can't react to it."

Myers isn't just willing to go the other way on heat, either. Take an at-bat from Friday night's game against Chris Capuano. Capuano, a veteran southpaw who made his big-league debut when Myers was 12 years old, baited the youngster with soft stuff around the zone. Myers abstained and worked a full count. He fouled off a changeup down and in before lining an elevated curveball away into right field. Capuano didn't make a great pitch, but Myers showed discipline by not rolling over on it.

Whatever concern there may have been about Myers' walk rate earlier in his season has since vanished. He's shown a solid command of the strike zone, and less swing-and-miss than his early-season strikeout rates portended. In fact, Myers entered Sunday with a 75 percent contact rate, three percentage points shy of the league-average clip, according to Baseball-Reference. Not all Myers' offensive contributions have came at the plate. He's shown a surprising feel for stealing bases and has nabbed the extra base in more than half of his opportunities. Marry his hard-hitting ways to his tendency to bust it out of the box and it shouldn't surprise anyone to see he's notched a few infield hits.

Though Myers' defense needs work—his good arm has gone unused thus far—his offensive performance makes the occasional misplay easier to overlook. Few figured Myers would hit this well, this soon. Yet it's not the product of slaughtering mistakes, and he's shown a feel for hitting that exceeds that of some veterans. While Myers' stat line may worsen as the season unfolds, he's shown enough for Tampa Bay to feel confident in his ability to become a key piece in their lineup for the next few seasons.

You need to be logged in to comment. Login or Subscribe
anderson721
OK, so as of today, who won the trade?
Reply to anderson721
RJAnderson
I know you said as of today, but this doesn't feel like a trade that can be judged yet. How the other youngsters on the Rays end developâ€”especially Montgomery and Leonard, neither of whom felt as safe, so to speak, as Myers and Odorizzi do/didâ€”still matters.
Reply to RJAnderson
Dodger300
I have already reached my judgment.

Regardless of whether or not anyone else develops, the Rays won the trade. And handily.
Reply to Dodger300
RHParn
I don't see how one could argue that the Rays didn't win this trade. Myers has huge potential and could be a force for more than a decade. Shields is on the wrong side of 30 and has another 2 years on his deal. I love Shields, but the long term and even current outlook is brighter for the Rays than the Royals. The Royals like to argue that they have been bad for so long, they needed this, but they could have kept Myers and signed some SP in the offseason without giving up a big time prospect like Myers AND others including Odorizzi, Montgomery, and Leonard.
Reply to RHParn
roarke
I'm not disagreeing about who won the trade, but I've heard comments like this several times - that the Royals could have just gone out and spent money in free agency instead - but who would they have gotten? Greinke probably wasn't going back to KC and they would have had to outbid the Angels. They could have gotten Kyle Lohse, I suppose, if that floats your boat. It's easy to say that the Royals should have just kept Myers and spent $30M on a free agent pitcher, but there has to be a quality pitcher that actually wants to go to KC for that to work out and that's not quite as easy as it sounds.

Myers has been great and would have filled a position of great weakness for the Royals, but Shields has been great for the Royals, too, and starting pitching is always a need for all teams. In the long run I suspect they will regret trading Myers, but the free agency alternative for pitching isn't quite as easy as people try to argue.
Reply to roarke
sbnirish77
Better question ... Puig or Myers in next year's keeper leagues?
Reply to sbnirish77
johnjmaier
My guess is the Royals thought they had a good chance of competing for a pennant from 2013-2015 with Shields and did not expect Myers to be this good, this early. With less than 8% chance of the playoffs currently a pennant is probably not going to happen this year. Their offense definitely could have used Myers in their lineup. Sad really but the Rays are an amazing organization. I grew up a Yankee fan but have come to respect teams like the Rays.
Reply to johnjmaier