The Wednesday Takeaway
Matt Harvey has enjoyed a rather spectacular first year in the majors, but somehow, the Mets ace had never shut out a team before Wednesday night (though he did throw nine scoreless on May 7 in a game it took the Mets 10 innings to win). He emphatically ended that drought against the Rockies, puzzling hitters throughout nine innings as New York earned a 5-0 victory. Though the National League’s current strikeout leader didn’t put up his usually gaudy total in that category, fanning just six batters, this performance was a real gem.

The right-hander never looked uncomfortable as the Rockies struggled to muster anything offensively, failing to get a runner into scoring position until the ninth inning. Harvey can be excused for that, too, considering the only reason Charlie Blackmon got to second base was fielder’s indifference prior to the game’s final out. Needing to get that last batter to complete the shutout, Harvey forced Troy Tulowitzki to pop up to second base.

The margin makes it seem like Harvey had some wiggle room in this game, but most of New York’s scoring came on a three-run double by Wilmer Flores in the bottom of the eighth inning. For much of the game, Harvey looked to be working with the usual weak run support he has received this season.

But as he has done throughout this season, the 24-year-old pumped out a masterpiece to blank Colorado. Practically all of his outs came easily, as he induced 14 grounders to just seven fly balls. When people talk about pacing and maintaining velocity over nine frames, well, look at this: 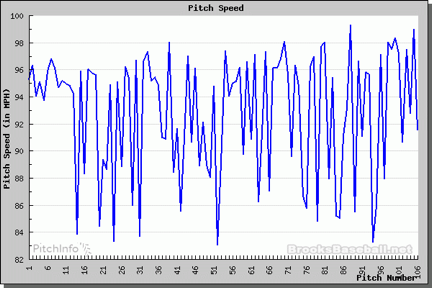 Harvey’s hardest pitch of the night, measured at 99.3 miles per hour according to Brooks Baseball, came in the eighth inning. He finished his night by touching 99 again with another fastball, before getting Tulowitzki’s pop up on a slider near 92 mph. Again, these were his 105th and 106th pitches of the night.

In the development of a great pitcher, there are so many different factors that it’s so hard to really control the situation. Obviously, staying healthy and being able to throw really hard go near the top of the list, but Harvey displayed something else Wednesday night. Not only did he completely overwhelm hitters, he showed an understanding of managing energy and pacing that’s difficult to teach. Beyond raw talent, there’s a certain discipline that goes into throwing perfectly accurate baseballs at near 100 miles per hour that many times. It’s something we’ve seen in aces like Justin Verlander.

Because we’ve already seen Harvey dominate so many times before, Wednesday night wasn’t any sort of breakout. He plays in the country’s biggest market and started the All-Star Game. He’s already a legitimate star even if his resume reads awfully short. But with every performance like this one, it gets easier to stay he’s not a fluke, that he’s capable of handling the rigors of being a frontline starting pitcher in MLB.

The Mets are now 13-10 when Harvey starts this season, a pretty stark contrast from the team’s 38-50 record when anyone else toes the rubber. On five occasions, he’s given up one or zero runs this season, only to have New York lose anyway. At least on this night, he had no trouble getting his win, even if he really didn’t need the extra support.

Flores had a pretty special night for New York, as well. Appearing in just his second career game after debuting Tuesday night against Colorado, the third baseman made the most of his chances by getting the first two hits of his career. The second one, which gave New York three key insurance runs in the eighth inning, presumably earned Flores a special ball for safekeeping. As easy as it is to praise Harvey, he’ll need guys like Flores to come through and contribute at the plate for this Mets team to get back to contention. —Satchel Price

Wednesday’s Matchup in Review
Cody Ransom took advantage of one of the few mistakes that Cole Hamels made last night, ripping a first-pitch fastball left over the middle of the plate down the left-field line for a double—Ransom’s first career hit off his former teammate. It’s hard to get away with a fastball down the middle, especially to a guy who feasts on belt-high fastballs from lefties. 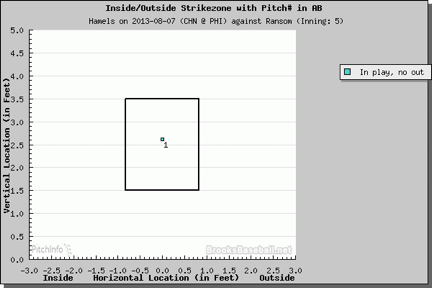 Ransom made his first trip to the plate with a runner on first and one out in the second inning and Hamels went to his signature changeup on all three pitches. Ransom was able to lay off the first changeup outside for ball one, came up empty at a second one below the knees, and got under a third changeup away and at the letters, flying out just in front of the left-field warning track.

In Ransom’s third crack at Hamels in the seventh inning, the 37-year-old laid off a cutter high and inside before rolling over to third base on a changeup away. Hamels got away with one here, as the belt-high change up was in Ransom’s noted happy zone. 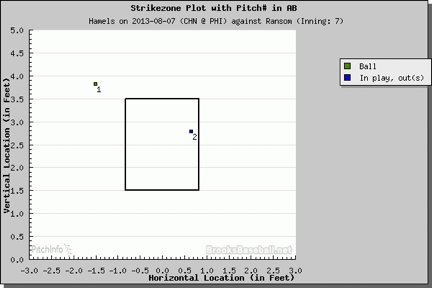 Hamels scattered six hits over seven quality innings, giving up two earned runs without issuing any free passes. However, he left with the game tied at two before Justin De Fratus surrendered what proved to be a game-winning three-run blast off the bat of Donnie Murphy in the top of the ninth inning. Ransom drew a walk against Luis Garcia in the ninth before being picked off of first by Philadelphia’s catcher, Erik Kratz. —Chris Mosch

Matchup of the Day
After Sunday’s win against the Marlins, the Indians had pulled to within just three games of the Tigers in the AL Central. On the heels of a stretch in which they won 10 of 11 games, Cleveland had the opportunity to pull even closer with an impending four game series against the reigning AL champions. After Wednesday’s 14-inning loss, the Tribe is simply trying to avoid a four-game sweep at the hands of its division rivals and will have to beat Max Scherzer to do so.

To make matters worse, several of Cleveland’s top hitters have failed to hold their own against Detroit’s co-ace over their careers. Cleveland’s six consistent regulars—Jason Kipnis, Carlos Santana, Nick Swisher, Asdrubal Cabrera, Michael Brantley, and Michael Bourn—have combined for a .226 /.311/.363 slash line against Scherzer in 166 trips to the plate. With all six players being either lefties or switch-hitters, Scherzer can expect to face a barrage of left-handed hitters on Thursday.

Prior to this season, Scherzer had been essentially a two-pitch pitcher against a given batter, relying heavily on his fastball and changeup versus lefties while unleashing his fastball-slider combination against right-handed batters. Scherzer was able to subdue righties with this two-pitch approach, but was ineffective against left-handers, who had a .301 and .296 TAv against Scherzer in 2011 and 2012, respectively. The Tigers’ hurler has mixed in a curveball against left-handed batters this season and credits his success to being able to keep lefties off-balance with the extra pitch in his arsenal. Scherzer has held lefties to a .221 TAv this season and the effectiveness of the curveball has been apparent; Scherzer has limited lefties to a .172 batting average with just one extra-base-hit against it.

Enter Michael Bourn, who has been brutal against changeups and curveballs during his career and comes into Thursday’s game just 3-for-18 against Scherzer. Bourn thrives against fastballs, as he is a .326 hitter against right-handed heat, but has batted just .197 against right-handed changeups and .207 against right-handed curveballs. Bourn and Scherzer faced off eight different times when each played their games in the Senior Circuit, and Scherzer relied on his fastball 71 percent of the time in those matchups. With the curveball at his disposal this season against Cleveland’s center fielder, Scherzer has mixed in his secondary pitches more often and opted for his heater just 56.7 percent of the time.

Scherzer tends to live outside the zone with both his curveball and changeup, most often throwing them below a left-handed batter’s knees or off the plate. 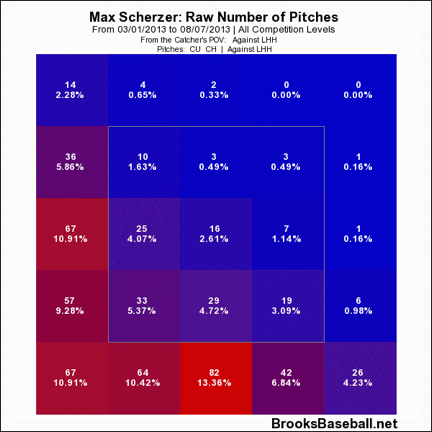 Below the knees happens to be where Bourn’s difficulties against right-handed changeups and curveballs are most pronounced. 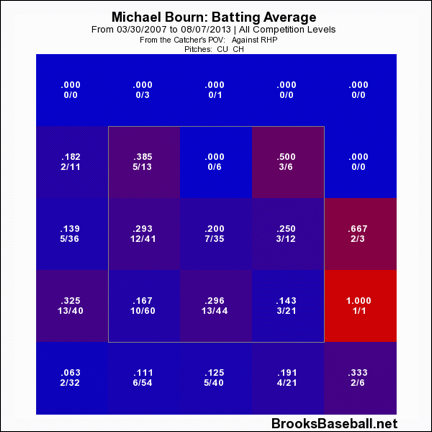 Scherzer has the lowest ground-ball rate among Detroit’s starting pitchers, but transforms into an extreme ground-ball pitcher versus lefties when relying on his curveball and changeup. When Scherzer keeps his secondary pitches low to Bourn, a noted ground-ball hitter, groundouts tend to ensue such as on this knee-high curveball on May 10, this curveball below the knees on July 8th, or this changeup middle-in on May 21 that followed a called strike and foul ball on changeups off the plate. Ten of the 14 balls that Bourn has put in play against Scherzer have been on the ground. 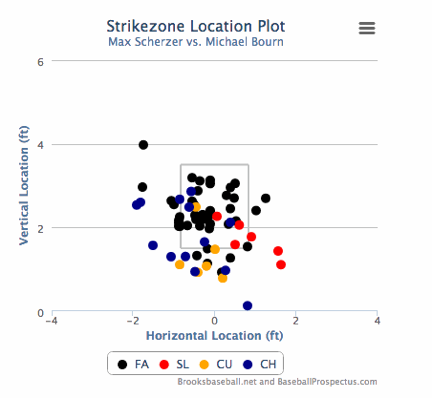 Two of the most desired results for pitchers are to miss bats and keep the ball on the ground, which is what Scherzer has been able to do when he mixes his pitches well versus Bourn. Sure, a ground ball or two is bound to get by for a single, but even the last ground ball single Bourn managed off Scherzer was one that was just out of the reach of Jhonny Peralta. Scherzer will likely have Jose Iglesias manning shortstop behind him this time (7:05 p.m. ET). —Chris Mosch

â€‹Watch to Watch for on Thursday

You need to be logged in to comment. Login or Subscribe
ScottBehson
Seemed like a deliberately chosen new strategy for Harvey and the Mets. Now that they are looking to reduce his workload, I think they've decided that he pitch more efficiently, as opposed to maximizing strikeouts. So 9 great innings instead of 7 otherworldly ones.
Reply to ScottBehson