This is part three of the Sean Doolittle trilogy. Part 1, in ESPN the Magazine, focused on Sean Doolittle—who, at the time, had thrown about 35 innings as a pro—to consider whether we need to change the way we think about pitching’s complexities. Part 2, here, looked at whether Brand New Pitcher Sean Doolittle had developed any more nuance in his next 50 innings, and concluded that he hadn’t. Other than picking up a little extra fire in his demeanor.

You’d have a hard time finding a pitcher whose stats are more similar this year than that, so why would we need an update? But Doolittle is actually quite a bit different this year. Last year he struck out 11.4 batters per nine; this year, it’s 8.0 per nine. He is facing fewer batters per inning this year, so the difference is even starker as a percentage:

So three-quarters of the strikeout rate but just as good a pitcher. Indeed, by the measures he prefers, he has been even better. Doolittle was talking about advanced stats on KNBR the other day and, while claiming that FIP and WAR were beyond him,

I think the more telling stat than ERA would be WHIP, how many guys is this guy letting on base. Maybe he has a low ERA but a high WHIP, and maybe it’s like this guy’s playing with fire, it’s only a matter of time before his stats even out. When we’re sitting down there in the bullpen and we’re looking at numbers I think that’s the one that we as players are putting the most stock in.

So if we play by his terms, then 2013 has undoubtedly been better than 2012: he has cut his WHIP from 1.08 to 0.90, with a walk rate cut by a third, and a BABIP that he has cut by 70 points. And I probably just lost you with that last part, because relief pitchers' BABIPs going down generally aren't worth a long post. I like Sean Doolittle a lot, though, so bear with me.

First, to retrace the steps we took in Part 2 of this trilogy, let’s look at his repertoire. Not only has he not started working in his breaking ball more; he’s leaning even more heavily on his fastball, upping usage from 80 percent to lefties and 91 percent to righties last year to 83 and 93 percent this year. Only three pitchers (Kenley Hansen, Ernesto Frieri, and Jake McGee) have thrown fastballs more frequently.

It’s always hard to know from a zone chart how much command a pitcher has, given that he might be missing his spot. Doolittle, for his remarkable strike percentage, isn’t much for command. Here he is, for instance, against Colby Rasmus a week ago, where red is the target and green is the location: 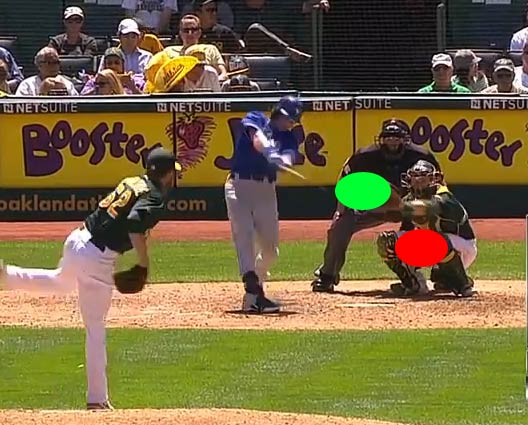 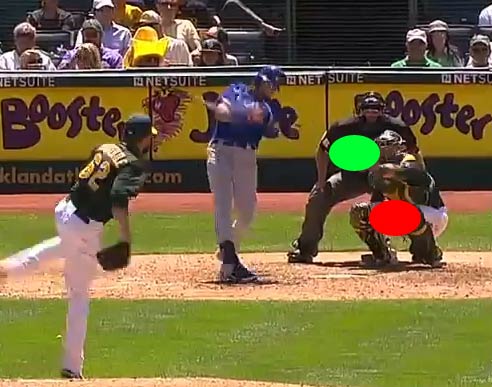 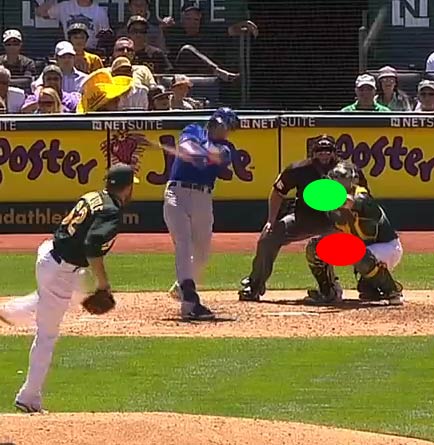 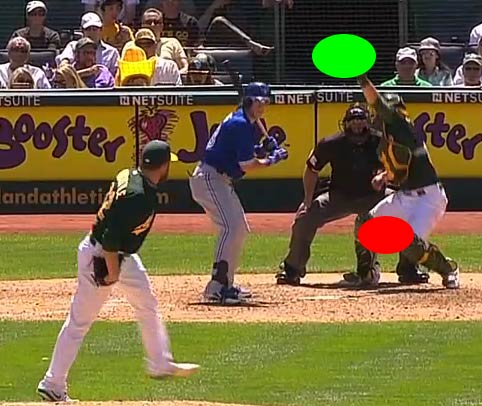 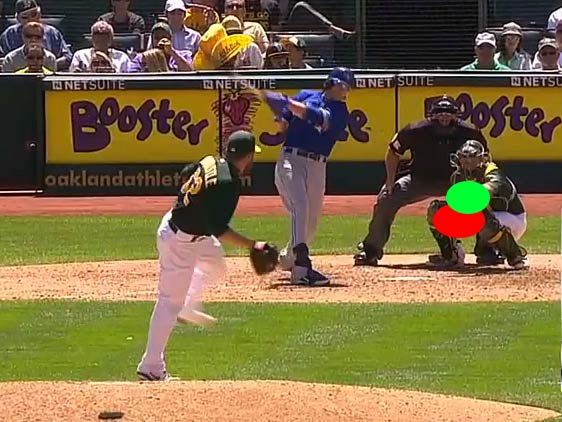 Not great! Without knowing where the target is for every pitch, or even many pitches, we can’t say he’s got better command. But we can generally deduce where Doolittle is trying to throw, particularly to lefties, where the target for a fastball is usually low and away, sometimes low and in, and with two strikes often up and away or up and in. He is, in other words, trying to throw to the four corners (out of the nine squares in the strike zone), as you would expect. Last year, 13 percent of his pitches to lefties were in one of the four corners; this year, 21 percent are. Last year, six percent were on a corner away, either at the top or the bottom; this year, 15 percent are. And last year, four percent were in that sweet spot low and away; this year, eight percent are. He’s still not painting reliably, as the at-bat against Rasmus showed. But he’s hitting that spot much more often.

One thing about trilogies is that they don't always last forever; they last only until the fourth movie comes out. The other thing about them is that they're easy to do because they just keep repeating the format of the first one. My guess is that this trilogy will, ultimately, have a fourth part. And a fifth, maybe a sixth. The new sequels probably won't break any new ground, because Doolittle doesn't seem to be breaking any new ground. But Doolittle is fascinating. First he pitched like a position player pitching, because that's what he was. Now he's still pitching like a position player pitching, because that seems to be what works best. I kept thinking Doolittle might have room to grow because he'd get more complicated, and have more tools. But that's not what's happened at all. Instead, as he gets more experience, he simply… gets better.

You need to be logged in to comment. Login or Subscribe
jfranco77
Just throw fastballs in the zone. Apparently he is learning from his teammate Bartolo Colon.
Reply to jfranco77
fredlummis
This analysis seems incomplete without velocity information. Am I correct to assume it is consistent year over year because it is not mentioned?

If you have a great fastball coming out of the pen sometimes you don't need to bother with the breaking stuff. Billy Wagner spent many years relying almost exclusively on #1 before regularly mixing in a second offering.
Reply to fredlummis
lyricalkiller
it is consistent, yes, sorry
Reply to lyricalkiller
walrus0909
Yes, BrooksBaseball suggests consistent velocity: http://www.brooksbaseball.net/cache/dd4086f515123f426653b13e116933e0.gif
Reply to walrus0909