The Weekend Takeaway
Ryan Dempster has struggled since an excellent April. Clay Buchholz has been sidelined since early June. John Lackey has a 5.49 ERA since the All-Star break. And Jon Lester has taken his team for a season-long rollercoaster ride.

Red Sox general manager Ben Cherington saw a club in need of rotation reinforcements last month, and he took action a day before the trade deadline, snagging Jake Peavy from the White Sox in a three-team deal that shipped Jose Iglesias to the Tigers. Peavy, whom Cherington lauded as a pitcher who “gives us a chance to win every time out,” tossed seven innings of two-run ball to help the Red Sox past the Diamondbacks in game two of three at Fenway Park.

The first impression was a positive one, but the verdict on the Peavy trade won’t be in for a while. In the meantime, one of Cherington’s incumbent starters has recently proved worthy of the praise that his boss heaped on his newest teammate.

Felix Doubront flashed upside but was erratic in April, and his season took a sharp turn for the worse in early May, when he was touched up for 23 hits over nine innings in a two-start span. The 25-year-old was effectively wild on May 16, issuing a season-high six walks but holding the Rays to two runs in five innings. Since then, he has been a rock.

On Sunday, that rock was immovable—at least to the Diamondbacks, who went down quietly while the Red Sox forced Brandon McCarthy, fresh off the disabled list, to throw 97 pitches in 4 1/3 innings. The home team built up a 2-0 lead off McCarthy and added two more runs against Josh Collmenter; the visitors seldom threatened. Doubront scattered five singles to blank the Diamondbacks over seven innings. He struck out five and walked none despite throwing first-pitch strikes to only eight of the 25 batters he faced. And he did all of that without his best stuff. 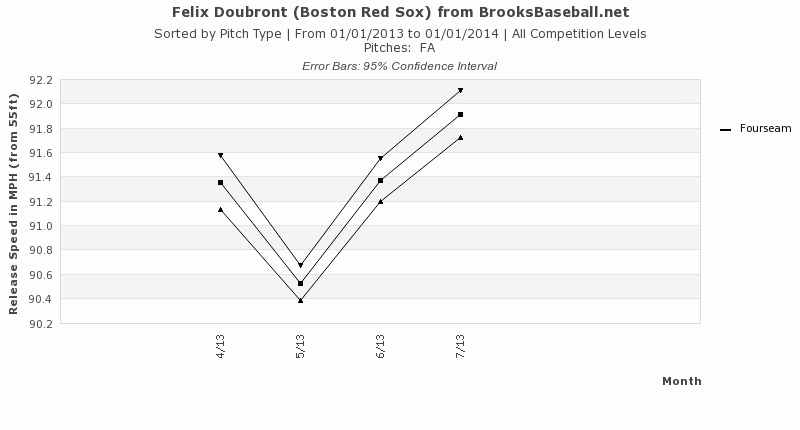 For the first four months of the season, Doubront’s performance mirrored his fastball velocity. He was okay in April, dreadful in May, better in June, and at his best in July, when his heater regularly lit up “92” on the radar gun.

On Sunday, Doubront’s fastball touched 92 mph, but it averaged 90. Nonetheless, he was able to keep the Diamondbacks off the scoreboard, and he relied heavily on his two- and four-seam heaters to do so. (Note: the above table is missing PITCHf/x data from a couple of innings, a total of 19 pitches.)

Batted-ball luck played a role in Doubront’s success, as it usually does when a pitcher amasses only four swinging strikes in a seven-inning outing, but Doubront also worked around a fielding error by Brock Holt and used effective sequencing to overcome his diminished arsenal the second and third times through the heart of the Arizona order. For example, he used two curveballs in this sixth-inning plate appearance by Aaron Hill, which ended with a swing-and-miss on a fastball high and away.

Doubront has now limited opponents to three or fewer earned runs in 15 consecutive starts, which—as the Elias Sports Bureau pointed out—puts him one shy of the franchise record for lefties currently held by Babe Ruth. He owns a 2.55 ERA since May 16 and has shaved his mark for the season down from 6.40, where it stood when he took the mound at Tropicana Field that day, to 3.56, good for 18th among qualifying American Leaguers.

The Red Sox hope to have Buchholz back before the end of the month. Lester has given fans reasons for optimism in recent outings. Peavy should help stabilize the rotation down the stretch. And the Red Sox are still in first place.

But even counting Sunday’s win, John Farrell’s club is just 8-7 in Doubront’s last 15 starts. If the southpaw stays as dependable in August and September as he has been over the past two-and-a-half months, a likely improvement in his remaining outings is one reason to like the Red Sox’ chances to win the East for the first time since 2007.

Friday’s Matchup in Review
Coming into the series opener between the Rockies and Pirates, the small sample of meetings between Jhoulys Chacin and Garrett Jones contained a whole lot of good news for Jones and a lot of neck craning for Chacin. Pittsburgh’s first baseman was 5-for-9 lifetime against the Rockies’ right-hander with a pair of home runs and a couple of walks. Moreover, in those 11 head-to-head plate appearances, Jones had not struck out even once.

That last part is still true after their three showdowns on Friday, but Jones is now 5-for-12, and he was unable to get the ball off the ground. Chacin tossed eight innings at PNC Park and allowed only one run on six hits—two of them doubles, both by Neil Walker—while striking out three. He did not issue a base on balls. And he did not serve up a home run, an area in which he has excelled throughout 2013. Chacin has now been taken deep only twice in his last 11 starts and only four times all season.

The sixth-place hitter in Clint Hurdle’s order, Jones grounded a 1-1 fastball into a 6-4-3 double play in his first at-bat and a 3-2 heater into a 4-6-3 twin killing in his second. He could not make two outs with one swing in his third trip to the box, since there was no one on base, but he tried his best anyway, tapping a backdoor curveball to shortstop for his third worm-burner of the day.

All three of the balls that Jones put in play were down and away. That all three wound up on the infield dirt is unsurprising, given the data in these two plots: 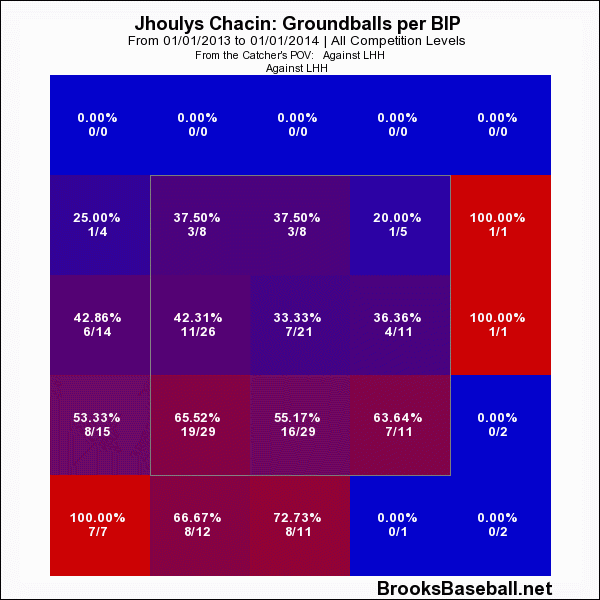 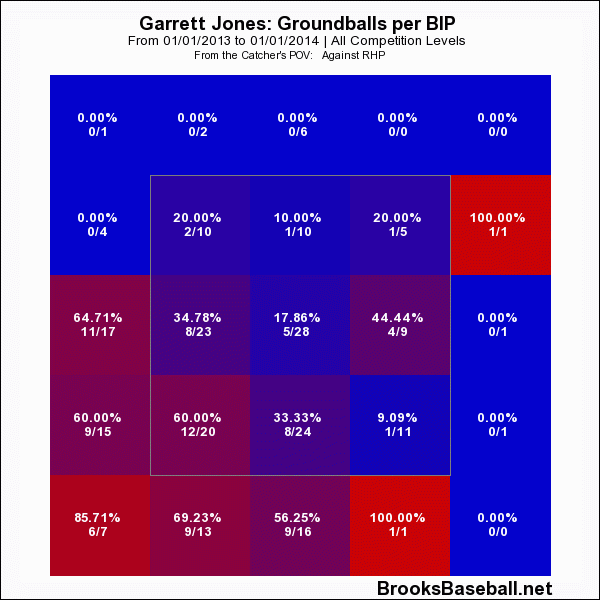 That’s bad news for Jones, whose power numbers have slipped markedly from his career-high, 27-homer showing in 2012. He is hitting fewer fly balls (41.7 percent in 2012 compared to 35 percent in 2013) and driving fewer of the balls that he elevates (17.1 percent HR/FB rate in 2012, 12.2 percent HR/FB in 2013) out of the park. With just 10 homers in 335 plate appearances to date, his effort in a corner-position platoon role has been one of the few disappointments on an otherwise solid Pirates roster.

Matchup of the Day
Of all the baseball skills that a major-league player might possess, hitting knuckleballs is probably the least useful—or, at least, the least-frequently useful. But don’t go telling that to Raul Ibanez, who has made the most of his scarce encounters with pitchers who throw the spin-less offering.

Ibanez only shook hands with Charlie Haeger (1-for-2) and Tom Candiotti (1-for-3), but he grew well acquainted with Tim Wakefield (six extra-base hits in 35 plate appearances) and has gotten to know R.A Dickey, too. Dickey appears to be Ibanez’s preferred knuckleball opponent, at least judging by the numbers, as the Mariners slugger is 11-for-30 lifetime against the Blue Jays’ righty. In those 32 plate appearances, Ibanez has whacked a triple and three homers, drawn a pair of walks, and struck out twice. His 1.140 career OPS versus Dickey is the fourth-best among hitters who have faced the 38-year-old at least 25 times, and it is Ibanez’s fifth-best effort among active pitchers against whom he has logged at least 25 trips to the box.

Twenty-three of the 32 head-to-head showdowns between Dickey and Ibanez are tracked on the afore-linked matchup page, but the data there, as is often the case with knuckleballers, does not tell us much about location tendencies: 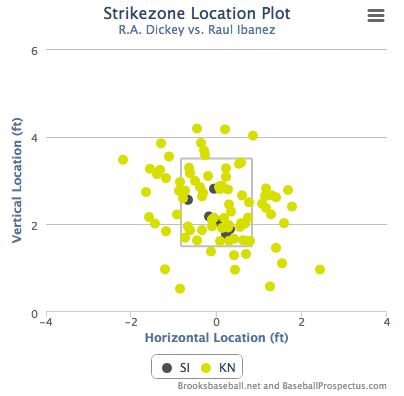 This table, from Ibanez’s Brooks Baseball profile, confirms what the matchup histories suggested:

We know that Ibanez loves nothing more than a floating knuckleball: since the start of the 2007 season, he has gone 13-for-31 in at-bats that ended with one of them, slugging .807 on the merit of five extra-base hits, three of them homers. But Ibanez, whose power surge was the toast of Seattle for most of the first half, has slipped into a 10-for-57 lull since the All-Star break. He drilled a couple of doubles off Orioles southpaw Wei-Yin Chen on Sunday afternoon, but has not gone deep since July 12, when he tallied two round-trippers in a win over the Angels.

We also know that Dickey, during his peak with the Mets, was most effective when his knucklers tempted hitters to chase above the zone or when he was able to tie them up inside: 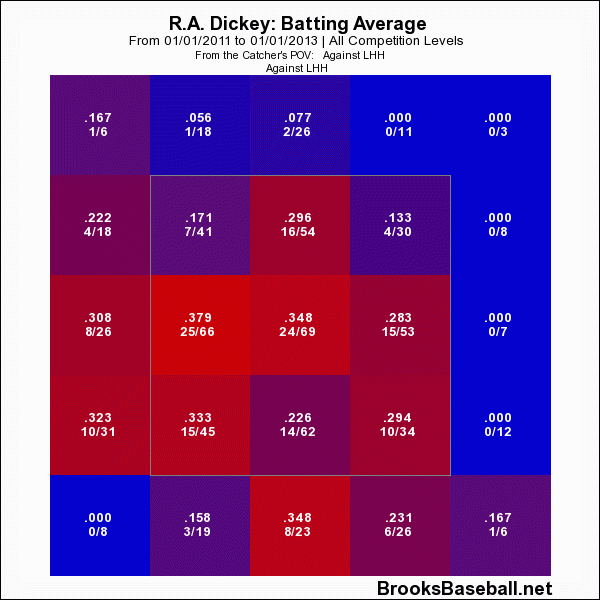 Dickey has fared much better, from a homer-prevention standpoint, away from the Rogers Centre than in it this season, allowing 18 homers in 75 1/3 innings across the border compared to just six in 71 1/3 in the United States. And, predictably, his ERA is a solid 3.28 on the road, but a bloated 5.97 at home.

But Ibanez has grown comfortable in Safeco Field, where the dimensions are cozier than they were when he departed after the 2007 season. He has swatted 16 of his 24 homers in Seattle, compiling an .891 OPS at home and only a .728 mark as a visitor.

Dickey has served up as many homers this year as Ibanez has slugged, but after a five-start streak of permitting at least one, he held the Athletics tater-less in a six-inning no-decision on July 31. The Nashville native has not logged consecutive homer-less outings since April. Ibanez’s bat stands between him and that accomplishment tonight (10:10 p.m. ET).