Last Tuesday night, in Baltimore, Wei-Yin Chen was in a tough spot. Chen had loaded the bases with two outs, and was one pitch away from escaping the inning with minimal damage. He took his sign, came set, and looked toward first base. But before he could start his delivery he heard J.J. Hardy yell to throw home. By the time Chen fired the ball, Astros rookie shortstop Jonathan Villar was three-fourths of the way to a successful swipe of the plate.

Flip the diamond around, and Chen now understands the difficulties every right-hander faces holding runners on with a blind spot. The differences in dynamics between stealing second base and home plate are, of course, numerous. A steal of second rarely merits the GIF treatment. Still, somnambulant righties, especially starters, pay a price for disregarding baserunners—those free bases turn into free runs, and those free runs turn into quick exits. The only thing for a right-handed starter eager to keep his job to do is to learn the tricks of the trade from some of the best, and worst, at holding runners.

Pickoffs
If the easiest way to avoid a stolen base is to prevent batters from reaching base, then the second easiest way is to pick off anyone who does reach base. No right-handed pitcher has picked off more runners since 2011 than James Shields, with 17. The rest of the top five comprises Johnny Cueto, R.A. Dickey, A.J. Burnett, and Julio Teheran—who has nine pickoffs in roughly 270 fewer innings than anyone else in the group.

The law of diminishing returns suggest Teheran's pace is unlikely to continue. For now, though, he's the closest thing there is to a Mike Trout of picking off baserunners. Despite his relative youth and inexperience at the big-league level, baserunners have learned to shorten their leads against him. It wasn't always like this. In Teheran's second start of the season, he allowed three stolen bases; two starts later he allowed two more. Yet, in the 17 starts since, Teheran has allowed one steal on two attempts while notching seven pickoffs.

For a right-hander to have a good pickoff move, he needs a quick pair of feet. Fast, artful footwork is necessary for the pitcher to navigate his body around the mound and the various balk rules in a timely enough manner to catch a leaning baserunner. Teheran's feet are fancy enough, but they are not the only reason he's eliminating baserunners at a blistering pace. Along the way Teheran has mastered a balk move—known as the knee pop—and the umpires have yet to call him on it, leading to scenes like this:

Teheran is far from the only right-hander using the knee pop to his advantage: three righties mentioned above have used the move at some point or another. It's not exactly a secret, either. Bob Brenly, who served as a Cubs announcer last season before moving on to the Diamondbacks this year, called Cueto on his knee pop in 2012 and did the same for Teheran during a May broadcast. In addition to breaking out the rulebook to explain the infraction, Brenly said, "I don't know if he's doing it intentionally, or if it's subconscious, but it's a balk."

Rule 8.05, Section A: "The pitcher, while touching his plate, makes any motion naturally associated with his pitch and fails to make such delivery."

The knee pop's effectiveness is in its deception. Basestealers focus in on the front heel as the telltale sign of whether a pitcher is going to the plate or spinning to throw to the base. When a pitcher pops his front knee he's also moving his heel, sending the baserunner a false sign, and potentially causing them to lean, take a bigger lead, or jet toward second, leaving him prone to a pickoff. If umpires aren't calling balks on the masters of the knee pop, then they're forcing baserunners to take smaller leads or otherwise risk being nabbed.

Without a good—read: uncalled—balk move, right-handed pitchers' best chance of keeping runners at first base involves a few legal tricks.

Quickness to the plate
The old saying is that most bases are stolen off the pitcher, not the catcher. There's perhaps no greater testament to that parlance than when Bartolo Colon is paired with John Jaso or Stephen Vogt. Neither backstop is an above-average defender, and the two have combined for a cumulative career kill rate of 19.5 percent—admittedly, almost all of that sample is from Jaso—but the pair has caught Colon in 13 of his 22 starts this season without the opposition running at will. For that the beefy right-hander can credit himself.

Colon serving as a human stop sign is nothing new. He has not allowed more than five stolen bases in a season since 2001 and, since returning to the majors in 2011, has averaged a stolen-base attempt every 36 or so innings. Though he may not look the part of an athletic marvel, Colon's ability to get the ball to the plate in a hurry is his standout trait in thwarting potential thieves. He employs a slide-step maneuver that asks him to generate momentum toward the plate using his tree trunk-sized leg and an abbreviated motion. Colon gets the job done, and has since early in his career. A 1995 scouting report on Colon, filed by then-White Sox scout Reggie Lewis when Colon was a 22-year-old in his first year of full-season ball, has him clocking in at 1.15 seconds.

Ultimately, basestealing is a numbers game. An elite throwing catcher can get the ball from his mitt to second base in about 1.7 seconds. A fringe-average runner can get to second base in roughly 3.35 seconds. That leaves the pitcher with a 1.65-second window to complete his delivery in order to give his catcher a chance at recording the out. The conditions are rarely that lenient, however, and most teams want their pitchers' deliveries coming in at 1.3 seconds or quicker. If a pitcher is routinely hitting the 1.5-plus mark then he's giving his catcher no chance of throwing out a runner, barring an over-slide or blown call.

In many regards, Tim Lincecum is the anti-Colon. The two are as physically dissimilar as it gets, and Lincecum, unlike Colon, has worked with some above-average defensive backstops—even with his reluctance to pitch to Buster Posey. But since 2010, Lincecum has been the Giants' pitcher most frequently run on, and it hasn't been close. Whereas Colon embraces the slide-step, Lincecum still uses a leg kick from the stretch, one that sees his front leg cross his body, slowing his progress to the plate:

Changing looks
What's frustrating about Lincecum's inability to hold runners is that he could benefit just from a slight variation in looks now and again. Of course it would take some adaptation on his part, but look no further than Jeremy Hellickson for a model on how mixing in a slide-step now and again can pay off.

The Tampa Bay right-hander used to alternate his looks between a slide-step and a leg kick. Hellickson has since adapted to using the slide-step at all times from the stretch this season, a decision Doug Thorburn bemoaned earlier in the year. No matter, Hellickson has found a good deal of success in tethering runners to the bag. He's averaged 0.41 stolen-base attempts per nine innings this season, putting him second in the Rays rotation, behind southpaw Matt Moore. For reference: The other right-handed pitchers in Tampa Bay's rotation have averaged a combined 1.18 attempts per nine.

Hellickson doesn't just mix up his delivery; he also alters the timing pattern. He's a deliberate pitcher no matter the situation, but he slows the game to a crawl when he's in a tight spot. The Iowa native also uses a tic in his delivery to his advantage. Before he comes set he taps his front foot twice. Hellickson sometimes throws to the bag following the first tap, in order to see if the runner has been lulled to sleep. He doesn't record many pickoffs, and doesn't need to in order for his efforts to have a positive effect.

For all the explanations out there concerning Hellickson's baserunner-stranding ways—infield flies, willingness to issue a walk to spare an extra-base hit, confidence in his secondary pitches—don't overlook his resolve in making runners earn every base by remaining unpredictable.

Other quirks
Last year Will Woods touched on the knee pop along with the double-set maneuver and the value of holding onto the ball. Not every move is designed to deceive the runner. Some are simply to give the pitcher a better feel for the runner's lead. Take the dip maneuver used by Mike Mussina, James Shields, and Wade Davis: 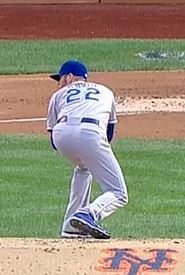 Davis isn't just showing off his glutes there, he's making sure he gets a two-eyed look at the runner before he comes set. It's no coincidence that Mussina, Shields, and Davis are among the move's users: Each had Dick Bosman as an instructor during development. John Feinstein explained the genesis of the dip in Living on the Black: "Bosman suggested to Mussina that he bend way down, almost to his knees, while getting into the stretch position, so he could sneak a look at the runner through his legs before standing up to his set position."

Right-handed pitchers may have to turn their backs on potential basestealers, but the best have found a way to even the odds. Balk moves, quick times to the plate, varied looks, and other quirks help pitchers slice into potential leads and, at times, create outs on the basepaths for the defense. There's a lot of feel and nuance involved in controlling the running game in the mound. But, ultimately, it's the pitcher who dictates the tempo of the game. The best don't forget it.

You need to be logged in to comment. Login or Subscribe
BillJohnson
I've wondered for years about Cueto and his knee pop. If it's obvious to us armchair managers, it must be glaringly so to those of the major-league variety. And if they can see it, so can the umps. So why doesn't it get called? Has there been an official "ruling" to disregard this particular part of the balk rule, or what?
Reply to BillJohnson
RJAnderson
Good questions. I don't know the answers.
Reply to RJAnderson
RJAnderson
I omitted this but I think some (the KC fans, maybe?) will find it interesting:

During batting practice on the road, Shields will measure the distance from first base to the outer edge of the dirt cutout. That way, when he peeks at the runner, Shields can accurately measure his lead based on how close he is to the cutout.

From here.
Reply to RJAnderson