Well, that was underwhelming. According to Retrosheet transaction logs and MLBAM’s count of this year’s crop, there were fewer big-league trades made this July (19) than in any other season since 1996. Prior to this year, the average number of July trades per seasons the last round of expansion was 30. 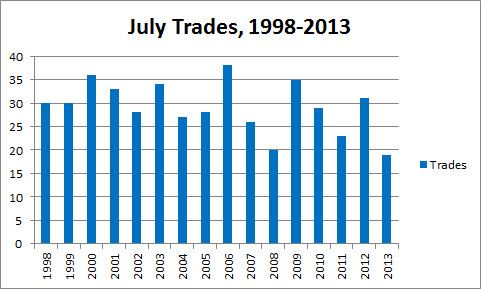 There are a number of plausible explanations for the lack of activity, ranging from the second wild card and increased competitive balance to the new draft-pick compensation system to increasingly data-driven front offices to the trend toward making mega-millions in TV money and locking players up long term before they approach free agency. Charlie Wilmoth took a thorough look at the circumstances surrounding the slow deadline at MLB Trade Rumors, and Sam Miller and I discussed the same subject on Tuesday’s episode of Effectively Wild. We don’t know for sure whether 2013 will prove to be a blip or the new normal, but we do know that there’s considerably less roster turnover to discuss than there typically is at this time of year.

Of the deals that did go down, some, as always, were inconsequential (here’s looking at you, Marc Rzepczynski), and only a few had impact potential. But dissecting trades is tradition, dammit, so I’m going to pick a few favorite moves, a few teams that did and didn’t make the most of the deadline, and a few holes on contenders that could be addressed during what might prove to be a busy August for waiver trades. (You can find links to our full breakdowns of all of the major—and most of the minor—deadline trades at the Trade Deadline Transaction Analysis Thread.)

Red Sox get Jake Peavy and Brayan Villarreal, give up Jose Iglesias and three lower-level prospects. [7/30]
I covered this one in depth on Wednesday. Boston got one of the top two potential difference makers who changed teams at the deadline, and did it by both selling high and dealing from depth. Jose Iglesias has a great glove, but this season is the first in which he’s looked even remotely competent at the plate, and that’s mostly because of a fluky BABIP that’s already begun to freefall. The Sox have Stephen Drew to start now and Xander Bogaerts to start later, so Iglesias was unlikely to be more than a utility type for them. And while Peavy could fall apart, he’s healthy now, which is when the Sox need an arm to fill in for Clay Buchholz. Boston has only a 52-45 edge over Tampa Bay in its odds of winning the East, so adding even a win or two could prove decisive. Plus, Peavy gives them another above-average starter to pencil in for 2014.

I like this one from Chicago’s perspective, too. The White Sox got a good return in prospects considering Boston picked up the entire tab for Peavy.

Dodgers get Ricky Nolasco and international bonus slot 4, give up three unspectacular pitching prospects. [7/6]
The Dodgers took advantage of both their own deep pockets and Jeffrey Loria’s refusal to spend, nabbing Nolasco and an international bonus slot for salary relief and a trio of low-ceiling right-handers who might all end up in the bullpen, if they make it to the majors at all. Nolasco could have commanded a higher caliber of prospect had Loria put players before payroll, but he’s rarely been known to do that. Los Angeles picked its target wisely.

The Dodgers also did well to get the exchange finalized early. By making their move early in the month, the Dodgers reduced the pool of available arms, raised the price for procrastinators, and avoided the temptation to pay a high price for another pitcher in the frenzied final minutes before the deadline. Even better, they’ve already banked some of the benefit of upgrading their rotation. Because they got him more than three weeks before the last-minute buyers acquired their arms, the Dodgers have already gotten four good starts out of Nolasco, three of which led to Los Angeles wins. If those starts had gone to the replacement-level pitchers who might otherwise have been on the mound, the Dodgers’ 2.5-game lead in the NL West might be even smaller.

You could say the same about the Orioles, who acted even earlier in acquiring Scott Feldman. I like the Los Angeles move a little better, solely because the Dodgers have more money than minor-league talent, and they found a trade partner who cared primarily about cutting costs.

Braves get Scott Downs, give up Cory Rasmus. [7/29]
Teams tend to overpay for relievers, whose performance is unpredictable and who can’t be counted on for much more than 20 innings over the final two months of the season. But Downs is one of the few relievers who’s been dependable over a span of several seasons, and he’s extremely tough on southpaws, which makes him a perfect fit for the Braves. Best of all, Atlanta gave up only a middle reliever to get him, albeit one with a lot of team control left.

Astros give up Jose Veras, get Danry Vasquez and a PTBNL. [7/29]
This one stands out not so much because the Astros turned their closer into a prospect who could become a “solid everyday guy,” but because they turned Veras into their closer. Before this season, the 32-year-old Veras was a generic, hard-throwing right-handed reliever in with shaky control. Any team could have had him, but he signed with the Astros for $1.85 million, maybe because they alone could promise him saves. Then they watched him build up a ninth-inning aura by saving 19 games in 22 opportunities, thanks to a career-best walk rate.

Maybe the Astros figured out how to help Veras find the strike zone, or maybe they simply lucked out. Either way, they were smart to sign him with an eye toward turning him into something more valuable a few months down the road. It feels passé to praise the Astros for being so committed to selling, but there’s quite a contrast between them and the other potential sellers who acted tentative about unloading their expendable parts.

Padres get Ian Kennedy, give up Joe Thatcher, Matt Stites, and a compensation pick. [7/31]
For the reasons R.J. Anderson outlined, I’m not ready to completely condemn this one on Arizona’s end, but I like what San Diego did. The Padres have the NL’s weakest rotation, and they’ve had success in the past putting struggling pitchers into Petco. They gave up a LOOGY who’s getting expensive and isn’t a necessity for a sub-.500 team, plus a prospect Jason Parks pegs as a future seventh-inning guy. Kennedy is under team control for a couple seasons and should give San Diego innings. Maybe they’ll even be effective ones.

Move that might make the biggest impact
The Garza trade, on both sides of the swap. The Rangers got one of the two best players traded, and one they really needed in light of how many holes their rotation had. And because they got the deal done well before the deadline, they’ve already reaped the reward of two strong starts that resulted in victories. The Cubs dealt an impending free agent with recent injury issues and got back two of the top three prospects who changed teams. It’s not a steal for either party, but it might take the cake in terms of 2013 impact and long-term prospect payoff.

Teams that might have been better off selling
Given the weakness of the teams in front of them in the wild card race, the pressures their front office is facing, and the fact that they should be better in 2014, you can sort of see (if you squint) why Kansas City didn’t sell (though not maximizing the value of Ervin Santana’s bounceback season seems like a missed opportunity). The Phillies and the Mariners, on the other hand, had a lot of pieces to offer and less incentive not to sell. It’s tough to gauge how hard either team tried to unload, given the conflicting signals they sent leading up to the deadline and the general unreliability of rumors, but they didn’t make the most of what seemed like a fairly strong seller’s market. There’s always August.

Teams that might have been better off buying
The Pirates tried hard to get something done, but all they have to show for their efforts today is Robert Andino. As incredible as this sentence sounds, Pittsburgh is a near lock for the playoffs, so in that sense, they had less incentive to upgrade than other teams. But they do have areas of weakness and prospects to trade, so they’ll continue to do what they can to plug their holes and capitalize on their surprising success (which isn’t to say that they should give up the farm because they’re so happy to be good again). The Yankees added Alfonso Soriano, but still have holes all over. This year’s market made it tough to pry position players off opposing rosters, which had to be frustrating for New York.

Positions still in search of players

Pirates, RF: Pittsburgh tried to get Giancarlo Stanton, but in light of the alternatives, even Alex Rios or Hunter Pence would be a big boost.

Red Sox/Yankees, 3B: Brock Holt, Brandon Snyder, and even Will Middlebrooks might not cut it. If Boston can’t land someone established, we’ll probably see Bogaerts soon. The return of Curtis Granderson could push Soriano to first, potentially filling one infield vacancy, but the hot corner is still an issue. The Yankees reportedly tried to trade for Michael Young on Wednesday, and they might make another attempt.

Rangers, OF: Texas doesn’t have an attractive internal solution in the event of a Nelson Cruz suspension.

Thanks to Andrew Koo for research assistance.

You need to be logged in to comment. Login or Subscribe
cdmyers
The Pirates are a near lock for the playoffs, but hardly for the division title. Given how much less valuable a wild card berth is, it's even more unfortunate that they didn't get something done (unless you're a Cardinals fan).
Reply to cdmyers
TGisriel
I like the Urrutia/Pearce platoon better than the various trade options I saw mentioned for the Orioles. What alternatives were available that you think were worth the cost and better than this platoon?
Reply to TGisriel
danugglasforearm
Rumors circulated that Texas checked in on Brian McCann only to have that door emphatically closed. But I wonder how interested they might be in Evan Gattis. Sure, Pierzynski is there, but that didn't stop them from asking about McCann. Gattis would offer flexibility in that he can "play" OF as well as C, and he's under team control through his prime years. Obviously McCann offers a much better track record, and perhaps they are mostly interested in a LH hitter. But I would have to think the cost, control, and flexibility Gattis offers catches him up a good bit. It would have been interesting to see what Atlanta could get for him.
Reply to danugglasforearm