The Wednesday Takeaway
If you’re going to claw back into a division race, you might as well do it in style. And after their general manager fell short in his 11th-hour bid to upgrade his lineup, the Rangers made their boss look good for the third night in a row.

Ron Washington’s club came into the week six games behind the first-place Athletics in the American League West, a shaky position that apparently left Daniels and the front office wavering on their deadline plans. With the threat of a 50-game suspension for Nelson Cruz hanging over their team, Daniels turned over many a stone in search of a power hitter who could approximate the right fielder’s production. But he was unable to pry either Jose Bautista or Edwin Encarnacion from the Blue Jays and opted to stand pat following the acquisition of Matt Garza from the Cubs earlier last month, perhaps reassured by the news that Cruz intends to appeal his ban.

In the meantime, the Rangers have snapped a four-game losing streak and begun a three-game surge. And they have done so, night after night after night, in walk-off fashion, becoming the first team to win three straight games on home runs in its last at-bat since the Tigers did it from June 25-27, 2004.

The Rangers trailed 3-0 after five innings on Monday, but they scored a run apiece in the sixth and eighth to leave Ernesto Frieri with only a one-run lead to protect in the ninth. He couldn’t do it. A.J. Pierzynski went yard to begin the inning, and two batters later, Geovany Soto sent the fans home happy as the backstops combined for the equalizer and the game-winner.

Tuesday’s 14-11 decision was replete with bLOLpenning. Joakim Soria and Robbie Ross teamed up to turn a 6-4 advantage into a 7-6 deficit in the top of the seventh. Kevin Jepsen squandered that razor-thin lead in the bottom half of the frame. The Angels raced ahead with four runs (one earned) off Tanner Scheppers in the eighth, but the Rangers drew even with three off Nick Maronde in the home half of that frame and one more off Frieri in the last of the ninth. Then, in the bottom of the 10th, Leonys Martin whacked a three-run blast off Daniel Stange, saddling the 27-year-old with a brutal loss in his Angels debut.

The Angels never led in Wednesday’s finale, in which the Rangers jumped ahead 1-0 on a solo shot by Cruz in the bottom of the second. The visitors knotted the score on Josh Hamilton’s big fly, which predictably drew a shower of boos from the Arlington crowd, in the top of the seventh, and the game remained tied until the bottom of the ninth. Unfortunately for the Angels, Michael Kohn, who relieved Williams and recorded the final out of the eighth, could not hold the line any longer. Adrian Beltre found a 2-2 fastball down the middle to his liking and destroyed it, rocketing a line drive over the left-field wall to complete the sweep.

With Frieri, Stange, and Kohn wearing the walk-off gopher-ball collars, the Angels became the first team to drop three straight on game-ending homers since the Expos did it from May 10-12, 1999. In case you’re wondering, the three Montreal pitchers victimized by the Diamondbacks were Bobby Ayala, Guillermo Mota, and J.D. Smart.

More pertinently, the sweep—coupled with the Athletics coughing up two of three to the Blue Jays at home—brought the Rangers to within four games of first place in the American League West. After a makeup game against the Diamondbacks on Thursday, the Rangers will travel to Oakland with a chance to further narrow the gap.

Wednesday’s Matchup in Review
Justin Verlander earned his first win since July 14, struck out more than five batters for the first time since June 12, and did his part in helping the Tigers cruise to an 11-1 victory. But it wasn’t all peachy for Jim Leyland’s club and its ace, who issued five walks and needed 103 pitches to complete six innings of work.

The 30-year-old sparred thrice with Ian Desmond, his counterpart in the highlighted matchup, retiring him twice and handing out a base on balls. Desmond grounded into a force play on a curveball in the first inning, a frame in which the Nationals loaded the bases with nobody out but scraped across only one run.

Verlander coaxed more swings-and-misses with his breaking stuff than he has in recent outings, which was the key to buoying his strikeout total, but his control of the slider remained shaky. Only seven of his 15 sliders went for strikes, compared to a 67 percent clip during the 2012 season, and his inability to command the pitch led to a leadoff walk for Desmond in the fourth inning.

Pitches one and six in the plot above were sliders, the first to open the plate appearance and the second to end it, and neither was a quality offering. With a full count, Verlander chose not to throw Desmond a fifth consecutive heater, but his payoff pitch was not close enough to the zone to get the Nats’ shortstop—who offers at about one-in-four pitches down there—to chase.

Desmond was called out on strikes in a nine-pitch at-bat leading off the sixth inning, and he finished the game 0-for-3 with the aforementioned walk. He is now 0-for-4 lifetime in five plate appearances against Verlander.

Matchup of the Day
There is a good deal of history between Chase Utley and Matt Cain, and most of it favors the left-handed-hitting second baseman. Utley is 8-for-26 lifetime versus Cain, with a double, four home runs, a walk, and three strikeouts, all of which adds up to a .308/.357/.808 triple-slash line. Yes, that’s an .808 slugging percentage, and a 1.165 OPS, the fourth-highest allowed by Cain to any hitter he has faced at least 25 times.

But there are two silver linings for Cain in this story. The first: when Cain toed the rubber for the Giants in Game Three of the 2010 NLCS, Utley went 0-for-3. The second: four of those nine hits preceded the PITCHf/x data utilized by the matchup tool, so the arrow may now be pointing toward Cain.

In the 19 plate appearances tracked by the tool, Utley went 4-for-17, though he did slug two home runs and draw a walk. 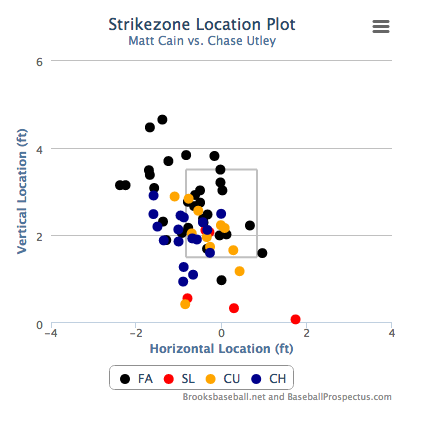 Cain has largely stuck to the outer half of the plate with Utley in the box, throwing fastballs up in the zone and curveballs and changeups at or below the belt. Utley has handled spin and off-speed offerings in the zone well over the course of his career, but he has a tendency to chase them beyond the boundary, and that is where Cain went to earn a strikeout in their most recent head-to-head plate appearance on July 21, 2012.

The 28-year-old right-hander is still searching for his peak form, but there have been positive signs in recent outings that point to better results going forward. Cain worked seven innings in a no-decision versus the Cubs on July 26, his only seven-plus-inning outing in the month of July, and held Dale Sveum’s lineup to a run on six hits and a walk while striking out seven. He has not allowed a home run since June 23, and his ERA is down to 4.79, its lowest point since the end of June, right before two consecutive meltdowns wrecked it again.

But breaking-ball command remains a wart, as illustrated by the following two tables:

Hitters are both squaring up the slider and curveball more often this year than they did last year, with line-drive rates on both pitches increasing, and missing them less often, with whiff rates declining by a couple of percentage points each. Too many of them are staying up in the zone, where they’re liable to get whacked, and Cain’s inability to paint the left corner (inside to righties, outside to lefties) has brought the swing percentages on those pitches way down (2012, 2013).

Cain showed better command of the two breaking pitches in his meeting with the Cubs last week, but Chicago’s top left-handed hitters were Anthony Rizzo and Nate Schierholtz. Utley is more dangerous, and he has swung a hot bat since the All-Star break, going 12-for-39 with a triple and a three big flies. An excellent fastball hitter, Utley will likely get the better of Cain if the right-hander is unable to use his curveball and changeup effectively tonight (7:05 p.m. ET).