The Monday Takeaway
The Rangers left Cleveland on Sunday afternoon dogged by a four-game losing streak. The Indians, riding a four-game winning streak, stayed at home and welcomed the White Sox. Both teams emerged victorious in their final at-bats last night. These are their stories.

Ron Washington’s team was 2-8 since the All-Star break, 8-15 in July, and had not won a series against a team other than the Astros since the end of June. One of the Rangers’ two post-break victories came in Matt Garza’s debut with the club, a 3-1 win over the Yankees last Wednesday. They had not won since.

Garza’s second assignment with the Rangers was a date with the Angels, his second straight start in Arlington, and one that—with their deficit in the American League West up to six games and with the Athletics hosting the last-place Blue Jays—they badly needed to win. The right-hander, acquired from the Cubs for a prospect bounty on July 22, turned in a quality start, tossing seven innings and allowing three runs on five hits and three walks. He struck out six.

The first run that crossed the plate against Garza was a story in itself. On June 5, when Garza was still a member of the Cubs, J.B. Shuck turned on a 94-mph fastball and yanked it deep down the right-field line. Unfortunately, he yanked it a bit too much, and although his drive was originally ruled a home run, it was overturned following a replay review. The decision denied Shuck his first career major-league homer. Fast forward a month and 24 days, to the fifth inning of Monday’s series opener, when Garza threw a 92-mph challenge fastball in a 3-1 count to Shuck, who was still tater-less in The Show. Shuck jumped all over this heater, too, but this time, he kept it far to the left of the foul pole, breaking the scoreless draw with the first big fly of his big-league career. And that is the story of how Shuck was able to think, on two separate occasions, that he had hit his first career home run off of Garza.

With that trivia nugget out of the way, we return to more salient matters—such as the 3-0 hole into which Garza dug the Rangers by the time the top of the fifth was over. Old friend Josh Hamilton’s two-run single later in the frame brought out the boo birds at the Ballpark in Arlington, and the Rangers did not give the crowd anything to cheer for until Ian Kinsler drove in Leonys Martin in the bottom of the sixth. Kinsler drove in the Rangers’ second run, too, on a sacrifice fly in the bottom of the eighth, but the home nine entered the bottom of the ninth still trailing, 3-2, three outs away from its fifth consecutive defeat.

Washington, who switched up his lineup in hopes of jumpstarting a dormant offense, made the bold decision to start both of his catchers, Geovany Soto behind the dish and A.J. Pierzynski as the designated hitter. An injury to Soto would have forced the Rangers to put a novice behind the dish or forfeit the DH.

But the gamble paid off in the ninth, when Pierzynski cranked a leadoff homer to set the stage for Soto’s heroics. Nelson Cruz singled, but he was erased on a double-play ball off the bat of David Murphy. And then, Soto—one out away from extra innings—saved the day with a towering fly ball that snuck inside the pole in left field, his first walk-off blast since June 30, 2011, sending the 36,282 in attendance home happy.

Some 80 minutes earlier, the Indians—with a chance to pick up half a game on the idle Tigers—had earned their fifth straight win in historic fashion.

The Tribe’s starting pitcher, Zach McAllister, outlasted his White Sox counterpart, John Danks, but both surrendered two runs, the former in seven innings and the latter in six. Matt Lindstrom and Donald Veal matched the goose egg posted by McAllister in the seventh, and Ramon Troncoso followed in the footsteps of Cody Allen and Rich Hill, ensuring that the game would remain knotted through eight.

Unfortunately for the visitors, manager Robin Ventura’s decision to entrust Troncoso with the ninth proved unwise. Left-handed batters had knocked Troncoso around to the tune of a .387/.500/.516 triple-slash line in 39 plate appearances this season, and on Monday, that line got worse.

Mindful of those splits, Terry Francona sent the quadragenarian Jason Giambi to the plate as a pinch-hitter for Mark Reynolds, and the old man delivered, launching a no-doubt bomb to center field to give the Indians a 3-2 win. With it, Giambi became the oldest player in major-league history to crank a walk-off shot, breaking the age record previously held by Hank Aaron and moving the Indians to within 2 ½ games of the Tigers in the American League Central.

Monday’s Matchup in Review
Before all of the Giambi hoopla, we learned in that White Sox-Indians game that even the three-true-outcomiest of matchups has limts. Adam Dunn entered yesterday’s meeting McAllister having homered, drawn a walk, or struck out in 12 of their 14 head-to-head plate appearances, an 85.7 percent clip that was Dunn’s highest against any pitcher whom he had seen at least 10 times. But after striking out looking in his first at-bat on Monday, Dunn put the ball in play in his next two.

The punchout, which came at the outset of the second inning, was the result of a seven-pitch at-bat in which McAllister used five fastballs, a curveball, and a changeup. Both of the off-speed offerings resulted in balls, but four of the five four-seamers went into the book as strikes. With the exception of the changeup, McAllister worked up in the zone, something he has done often when facing Dunn, as I mentioned in yesterday’s preview. The deathblow painted the outside corner, nipping enough of it to impress home-plate umpire James Hoye, who enforced the edges strictly for most of the night.

With a runner on second and one away in the top of the fourth, McAllister went back to the fastball, jumping ahead in the count 0-2. The first two heaters, both 93 mph, were thigh-high, crossing each side of the plate; Dunn took the first one over the inner edge, then fouled off the second, which was well within the outer boundary. McAllister climbed the ladder with his third offering, aiming at the letters of the 6-foot-6 Dunn, and notched a pop up that third baseman Mike Aviles tracked down in foul territory.

McAllister worked seven innings in the victory, so his last showdown with Dunn came in the sixth, again with a runner on second (Alex Rios, who doubled), but this time with two down. He went with an up-and-in fastball for strike one, but then pushed his luck with another off-speed pitch—and paid the price. The 83-mph splitter stayed up and caught far too much of the outside third of the plate, and Dunn thumped it to right field for a two-bagger that plated Rios.

Dunn is now 2-for-17 lifetime versus McAllister with one homer, three walks, and nine strikeouts. The three-true-outcomes rate between them dropped from 85.7 percent to a still-lofty 76.5 percent with the one-in-three result on Monday night.

Matchup of the Day
Roberto Hernandez has been remarkably consistent over the last month. That does not, however, mean that he has been good. The right-hander formerly known as Fausto Carmona has been charged with exactly three runs, all of them earned, in each of his last five starts, pitching between five and eight innings every time. His ERA, which stood at 5.14 before this stretch, has declined to 4.92.

According to the Baseball-Reference Play Index, the record for consecutive outings allowing precisely three earned runs is seven, held by Scott Baker, Gary Peters, and current Red Sox manager John Farrell, but all of them permitted at least one unearned run to go with their 21 earned tallies. Thus, Hernandez could tie the tremendously significant all-time record of chucking exactly three runs onto the scoreboard in six straight starts by doing so again tonight. Aaron Sele, who joined the club about two decades ago (July 19-August 17, 1993), remains its freshest member.

Here to help Hernandez in his quest to give up three runs to the Diamondbacks is Jason Kubel, who has helped the right-hander a bit too much in their past encounters. The two saw plenty of each other when Hernandez pitched for the Indians under his assumed name and Kubel did his slugging for the Twins, and Kubel generally came out on top. He collected 14 hits in 38 at-bats, six of them—three doubles and three homers—of the extra-base variety, and he also walked thrice while striking out only four times in 42 plate appearances. That adds up to a 1.113 OPS, the second-highest mark authored against Hernandez among hitters who have faced him at least 40 times. (Curtis Granderson, at 1.354, leads the pack.) 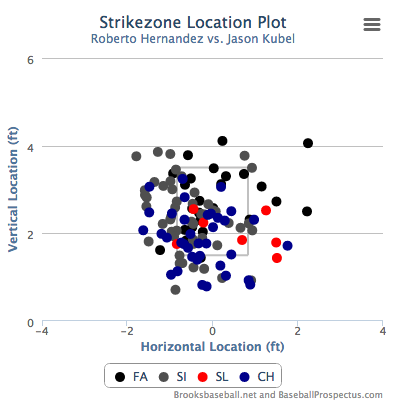 Down and away is where Hernandez has typically pitched left-handed hitters over the course of his career, and down and away has been his preferred location when Kubel has stared him down from the box. But opposite-handed hitters have generally fared well against Hernandez, amassing a .292/.362/.449 triple-slash line in 2,530 plate appearances, and they have done especially well in 2013, combining for a .303/.367/.531 showing in 285 trips to the plate. The problem is that when Hernandez misses his outside-corner target, his pitches tend to get clobbered: 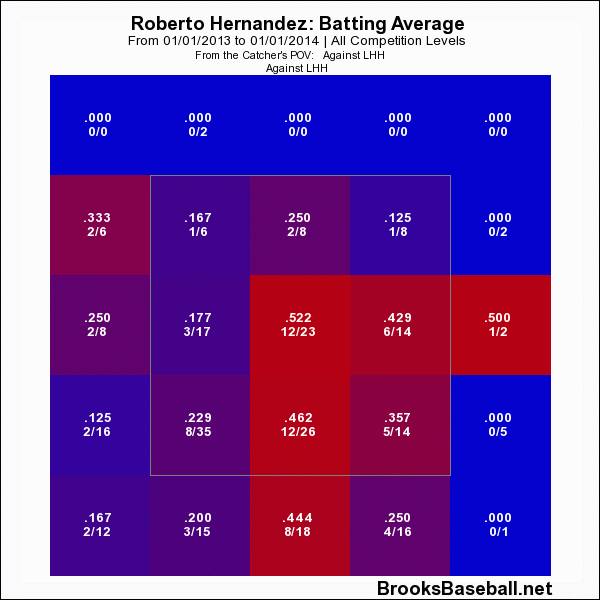 And as you might suspect based on the head-to-head track record, Hernandez has a history of serving up mistakes to Kubel. This homer in 2009 came on the fifth pitch of an at-bat in which three offerings went right down the middle. This long ball in 2010 was the fate of a sinker that could scarcely have been teed up better. And with Hernandez’s velo down from its mid-90s, early-career peak, the right-hander’s sinker and fastball command is even more critical now than it was when he last matched wits with Kubel in 2011.

Then again, Kubel’s bat has also been far less potent so far in 2013. His True Average is down 42 points, from .286 to .244, compared to last year, and he has notched only five homers in 231 plate appearances, just a season removed from smacking a career-high 30 in 571 tries. With -0.8 WARP to his name through 70 games, a total dampened by a two-week stint on the disabled list to nurse a quad strain in April, Kubel is doing little to justify his $7.5 million salary. He is, according to Peter Gammons, on Kevin Towers’ chopping block, as the veteran general manager tries to free up salary for possible trade deadline additions.

Kubel could make Towers’ job a tad easier with a strong showing on the eve of the deadline, but he will need to reverse a worrisome trend. Before 2013, he made his living punishing right-handed pitchers’ mistakes, carving out a niche as a quality long-end-platoon outfielder who was somewhat miscast when given an everyday role. This year, he is hardly punishing anything. His .706 OPS against righties is down 182 points from its .888 perch in 2012.

Hernandez’s command and velocity are waning. Kubel’s bat has lost a good deal of its punch. Tonight, we may find out which has fallen further—and learn whether, in the latter stages of their careers, the right-hander will finally gain the upper hand (7:10 p.m. ET).