The Weekend Takeaway
From the beginning of the 1916 season through Saturday, only three pitchers had struck out 13 or more batters in a start while walking none before reaching the current legal drinking age: Gary Nolan, Kerry Wood, and Dwight Gooden, who did it twice. Now that club has a fourth member: Jose Fernandez, who will have something to celebrate when he turns 21 on Wednesday, and who opposing manager Clint Hurdle compared to Gooden after the game.

The 14th-overall pick in the 2011 draft, Fernandez opened eyes when he fanned eight Mets over five innings in his major-league debut and then blanked the Phillies through six two-hit innings in his second trip to a big-league mound. A couple of hiccups in late April and another in Tampa Bay on May 27, combined with the Marlins’ hopeless entrapment in the National League East cellar, served to take Fernandez off of most fans’ radars. But Sunday’s dominant outing, in which he outgunned the pitcher taken first overall in his draft class, should restore Fernandez’s place on the stage.

Not since Wood’s 20-strikeout one-hitter on May 6, 1998 had a pitcher on the young side of 21 done what Fernandez did in the series finale against the Pirates at Marlins Park. And while Fernandez came seven punchouts shy of striking out his age, he became just the third pitcher since 1916 to complete eight innings with at least 13 strikeouts on fewer than 100 pitches, joining Tim Lincecum and Ricky Nolasco in that even-more-exclusive club.

To notch his fifth consecutive quality start, Fernandez held the Pirates to five hits, four of them singles, while amassing the 13-to-0 K:BB ratio. He threw first-pitch strikes to 21 of the 28 batters he faced, and of the 11 non-strikeout outs he recorded, nine came on groundballs. Twenty-eight Pirates stepped into the box, and only seven hit the ball out of the infield.

As if that weren’t sufficiently impressive, consider that Fernandez assembled those numbers while pounding the zone and missing bat after bat. Of his 97 pitches, 74 went into the book as strikes, and 22 of those 74 were swings-and-misses. Fernandez’s high-90s fastball accounted for eight of those whiffs, but his curveball—a power breaker that sits in the mid-80s—was even more untouchable, drawing 12 whiffs in 42 tries. That’s a 28.6 percent whiff rate on the bender, more than double the offering’s 14.2 percent swing-and-miss clip coming into Sunday’s outing.

All nine starters in manager Clint Hurdle’s lineup struck out at least once, and leadoff man Starling Marte took a hat trick onto the getaway flight. Fernandez struck out the side in the third and fifth innings, helping the Marlins to recover from their early 2-0 deficit. Pedro Alvarez, the Pirate who held off punching out the longest, led off the top of the second frame with a single and scored on a double by Russell Martin. The visitors’ catcher then stole third and touched the plate on a single by Clint Barmes. But that was all the Pirates would get—in fact, no Bucco advanced past first base until closer Steve Cishek relieved Fernandez to earn the save in the bottom of the ninth.

The Marlins tied the game in the bottom of the fourth inning, stringing together a quick rally jumpstarted by Giancarlo Stanton’s one-out walk. Logan Morrison singled to move Stanton into scoring position, and Ed Lucas singled to bring the right fielder home while advancing the first baseman to third. Morrison scampered across the plate on a sacrifice fly by Donovan Solano, knotting the contest at two runs apiece.

Two innings later, once again up with the bases empty and one out, Stanton clobbered a 95-mph first-pitch fastball 415 feet, off the foot of the leftmost palm tree on the home-run sculpture in left-center field. His bomb would ultimately deal Gerrit Cole his fourth loss and ensure that Fernandez’s efforts would not go unrequited. Stanton reached base in 11 of his 13 plate appearances during the weekend series, including seven hits—four of them for extra bases, two of them over a fence—in nine at-bats.

While leading the Marlins to their second straight series victory in the rubber match and toppling Josh Beckett’s franchise record for strikeouts by a rookie in a single game, Fernandez teamed with Cishek to sustain a month-and-a-half-long run of excellent Miami pitching. The Marlins’ staff ERA stands at 2.92 since June 16. They are 20-16 over that span, and even in defeat, they have consistently put up a fight. Only four of those 16 losses were by more than three runs.

As the Pirates learned the hard way this weekend, with Stanton sizzling and the pitchers keeping every game close, victories over the Marlins can no longer be taken for granted. At 40-63, Mike Redmond’s squad has the worst record in the National League. But it also has the arms to be a pesky spoiler down the stretch.

Friday’s Matchup in Review
With the unfavorable history between Justin Upton and Adam Wainwright likely in his mind, Braves manager Fredi Gonzalez opted to give his regular left fielder the night off and to start Evan Gattis in his place. Gattis went 1-for-2 with a walk before being replaced by Reed Johnson, who tacked on a single in the late innings of the 4-1 Braves win.

Upton remains 0-for-10 with three strikeouts against Wainwright. They may meet again when the Braves visit the Cardinals next month for a four-game series that begins Thursday, August 22 at Busch Stadium.

Matchup of the Day
Adam Dunn has essentially been a three-true-outcomes hitter since the day he set foot in the big leagues with the Reds on July 20, 2001. The 33-year-old reached his three-true-outcomes peak last season, during which 368 of his 649 plate appearances (56.7 percent) resulted in a home run, a walk, or a strikeout, but he has diversified his portfolio so far in 2013. Dunn has slugged 25 home runs, putting himself roughly on pace to match last season’s total of 41 (given the same number of plate appearances), but his 12.9 percent walk rate is his lowest since 2010, and his 29.9 percent strikeout rate is his best since 2009.

Not to worry: if history is any guide, he will lock horns with the perfect pitcher to get him back on track this evening. Among pitchers with significant experience against Dunn, no one has done a better job of restricting his results than Indians right-hander Zach McAllister.

The 25-year-old McAllister enjoyed a fine start to the season, carrying a 3.08 ERA through 61 1/3 innings at the end of May, but he was dreadful in a loss to the Rays on June 2 and hit the disabled list the next day with a sprained middle finger on his pitching hand. McAllister returned to the mound at Safeco Field on July 23, but the Mariners touched him up for four runs (three earned) on eight hits over five innings. Now, with top prospects Trevor Bauer and Danny Salazar breathing down his neck and the specter of a deadline trade for rotation help looming, McAllister must rediscover his early form to continue toeing the rubber every fifth day.

Among the White Sox standing in his way is Dunn, who has not posed much of an obstacle in their past encounters. The big left-handed hitter is 1-for-11 lifetime versus the righty in 14 career plate appearances. The one hit was a home run, and all three of the non-at-bat plate appearances ended in walks. Of the 10 trips to the box for which I have not yet accounted, eight resulted in strikeouts. Which means that 12 of the 14 meetings between McAllister and Dunn resulted in a home run, a walk, or a strikeout—an 85.7 percent three-true-outcomes clip. As I hinted a couple of paragraphs ago, that is Dunn’s highest such mark versus any pitcher he has faced at least 10 times.

The sample size here is admittedly small, but what’s most remarkable about all of this is that McAllister does not serve up an inordinate volume of home runs, dole out a bloated amount of walks, or miss bats at a particularly impressive rate. He brings a 7.5 percent career walk rate, an 18.6 percent career strikeout rate, and a 2.9 percent career home-run rate (27 in 937 batters faced) into tonight’s outing, which adds up to a 29 percent three-true-outcomes rate. Compared to, say, his rotation-mate Scott Kazmir (35.2 percent) or the league leader among qualifying starters in 2013, Yu Darvish (41.1 percent), McAllister is a lightweight. Yet, here we are. 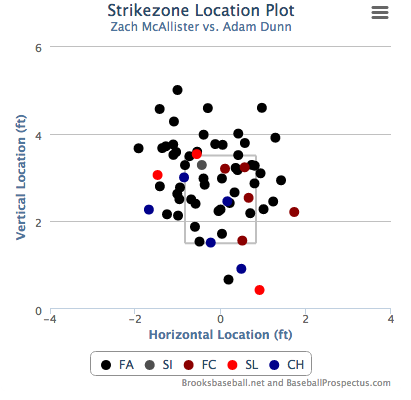 As illustrated by the plot above, which you can find on the afore-linked matchup page, McAllister has pitched Dunn upstairs, seldom venturing below the thighs and often aiming well above the letters. A heavily fastball-oriented pitcher, McAllister has exaggerated that approach when staring down Dunn, using his four-seamer, sinker, or cutter 88 percent of the time, compared to a 73 percent combined usage rate versus all left-handed batters. Though he mixes in a changeup and slider, McAllister lacks a whiff-inducing secondary pitch, a shortcoming that forces him to lean on his fastball even in favorable counts. And, when McAllister has a lefty hitter on the ropes in a two-strike count, he tends to work up and away—a strategy that, as you can see on the matchup plot, he has employed often against Dunn. 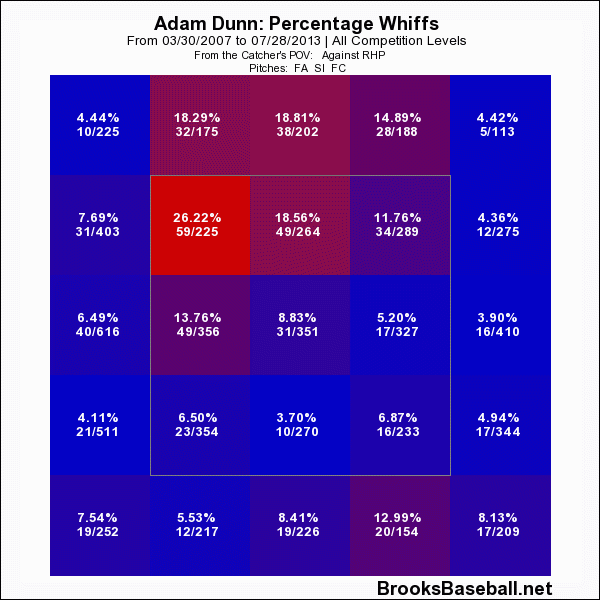 This chart might have informed McAllister’s approach, and it may also explain his success in fanning Dunn, who—when facing a fastball-throwing righty—whiffs most frequently on pitches upstairs. In this at-bat, a strikeout on September 24, 2012, Dunn saw six consecutive fastballs, none of which crossed the plate below the belt. In this one, another strikeout on April 24, 2013, McAllister painted the corners in the upper third of the zone while changing Dunn’s eye level with a couple of pitches in the dirt.

The only sinker that McAllister has ever thrown to Dunn wound up over a fence—a long way over a fence, in straightaway center at U.S. Cellular Field, to the great delight of broadcaster Hawk Harrelson. It was a 1-2 pitch that missed his catcher’s inside-and-low target by a foot. The whiff plot above might suggest that the location mistake was still reasonably likely to elicit a swing-and-miss, but here’s the trouble: Dunn loves few things more than elevated sinkers on which he can extend his arms.

Apart from sticking with the four-seamer and being more careful, there isn’t much of a motive for McAllister to alter his approach to Dunn, who drew a couple of walks to go with his strikeout in their most recent meeting on April 24. Likewise, Dunn won’t suddenly stray from the patient, swing-for-the-fences style that has, for better or worse, defined his career. Is the 14-plate-appearance résumé of homers, walks, and strikeouts a fluke, or is the pairing of McAllister and Dunn a match made in three-true-outcomes heaven? Adding a few more plate appearances to the sample should get us a bit closer to answering that question (7:05 p.m. ET).

You need to be logged in to comment. Login or Subscribe
terryspen
For Fernandez's start yesterday, I was sitting directly behind home plate in the lower deck. His curve was a thing of beauty -- disguised well with a huge break and drop and speed differential from his fastball. It's too bad Fox decided to spend the inning Fernandez pitched in the All-Star Game talking to Jason Grilli rather than tell his interesting backstory to a national audience. Given the Marlins' young and promising rotation, Cishek learning how to tame lefties and Stanton, as a Miamian I would be feeling optimistic except I can't shake the fear Loria will trade them all once they hit arbitration.
Reply to terryspen