Fantasy players are used to looking at depth charts and seeing the players who are most likely to stand on the field in the following game for a given team. At Baseball Prospectus, the depth charts have long meant something more—a representation of expert opinions on who will play for each team at each position for the remainder of the season. While this doesn't help fantasy hyperactivity so much—for that, we offer the MLBDepthCharts section of the site—it provides the mechanism to best determine how a team will do the rest of the way (or all season long, when viewed before the season starts). On that note, the starting Depth Charts page is actually a listing of projected team performance by division, as predicted by PECOTA forecasts for the various players. 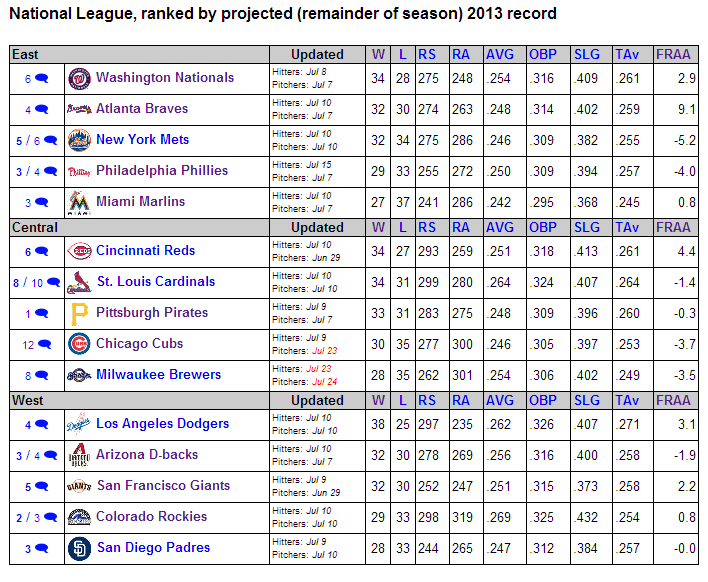 How To Use The Depth Charts

The Depth Charts are playing time-weighted projections for each player which then build up to a team projection. The result of this team projection is in the upper-left corner of each team's depth chart. Here you'll find the team's projected record, runs scored, runs allowed, and triple-slash stats (AVG/OBP/SLG).

In both the position player and pitcher sections, boldfacing indicates a starting player at a position–someone who is getting at least 50% of the team's playing time at a single position for Position Players, or a projected rotation member or closer for Pitchers.

When reading the statistics, only PA and IP are broken out for each individual entry. All other batting and pitching statistics are rolled up for the entire year. For example, a bench player could have playing time at different positions – e.g. a fourth outfielder is slated to get 130 PA in LF and 170 PA in RF. For all other statistics besides PT% and PA, the numbers next to each entry in LF and RF will be his aggregate statistics for the 300 PA. This works similarly for pitchers who both start and relieve.

The "Order" column is the spot in the lineup where the position player is expected to hit.

Once a team is clicked on, no fewer than five different sets of stats are available to describe how the team and its players will do:

At the top, some team summary information:

Below, a block with the hitters on the team, and two views of this data, are available. The default view is "by position," but clicking the button marked "Display By Batting Order" will list the players based on the percentage of times they are expected to bat in each position in the lineup. 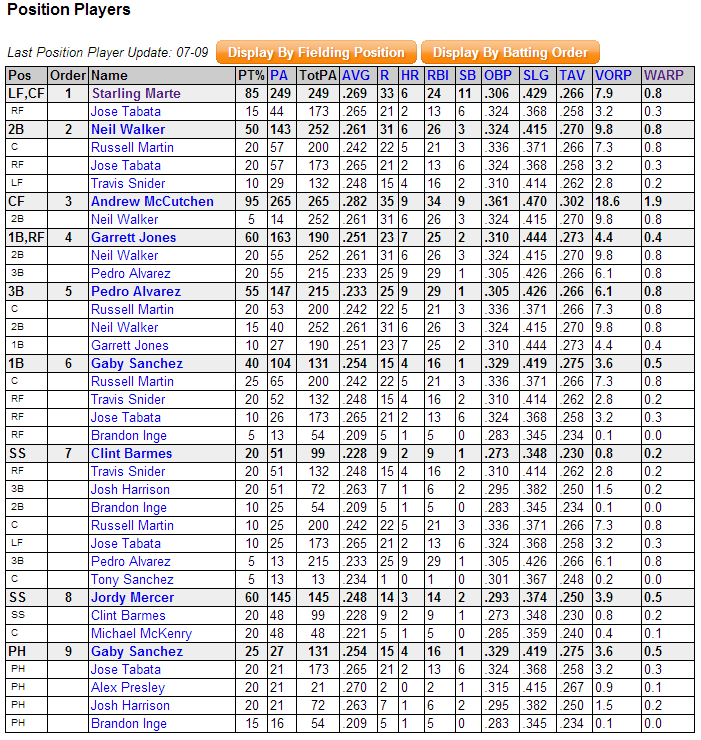 This box with batting stats based on position or order is followed by a quick summary of the batters expected to play for the team, e.g.

Each team's depth chart page concludes with pitching stats (PECOTA-projected for the remainder of the season): 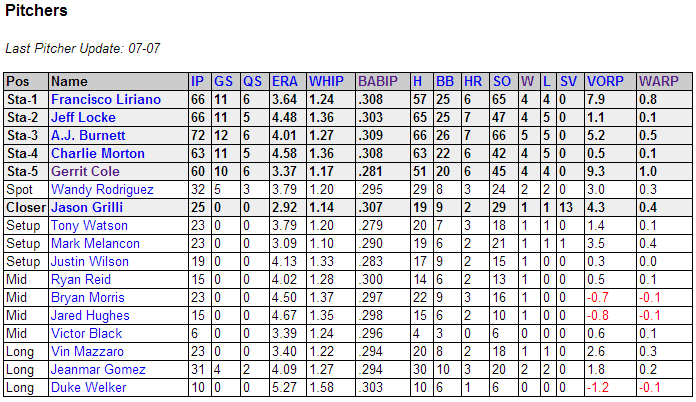 Between the depth charts and the team audits (link for the Pirates' Team Audit page), BP offers a wealth of information on where a team has been and where it's expected to be headed in the current season.

You need to be logged in to comment. Login or Subscribe
davescottofakron
So this is PECOTA taking account of THIS SEASON'S performance and adjusting it's prediction for the rest of the season? How often does this re-assessment done? Every day?
Reply to davescottofakron
mcquown
That is correct.

Colin explains some more details about Rest-of-Season PECOTA in this article: http://bbp.cx/a/20494
Reply to mcquown