: All right so that sucks, but he’s gonna miss the minimum. Might not be such a bad thing. He’ll take a little time off, get his head right, and come back hitting dingers like he did in 2011. Fifteen days is nothing. I’ve had hemorrhoids that lasted longer than that.

: Yeah no kidding, I know when he went on the DL and I can count to 15. That's how long the disabled list lasts.

: What I want to know is why you would even leave a snag somewhere where Kemp could hit it? Maybe the grounds crew didn't know it was there. Probably such a small snag no one even saw it it. Can't be a big deal if it's that small a snag.

: Yeah, probably better if he's activated at home. No one wants to come back and be booed.

: Irritation isn't so bad. Sometimes I get irritated when I read injury updates that turn out to be LIES but I always recover pretty quickly. Think it works the same way with shoulders.

: Sweeeet, gonna fill out my lineup card and put it under my pillow. The night before Kemp comes back always feels like the night before Christmas. Guess you could call it Kempmas Eve ha ha

: Appearing to injure himself? Uh, okay. Jump to conclusions much? 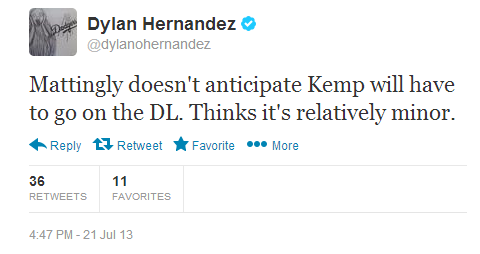 : No one knows more than the manager when it comes to these things. If Donnie Baseball says it's minor, you better believe Kemp is just day-to-goddamn-day. 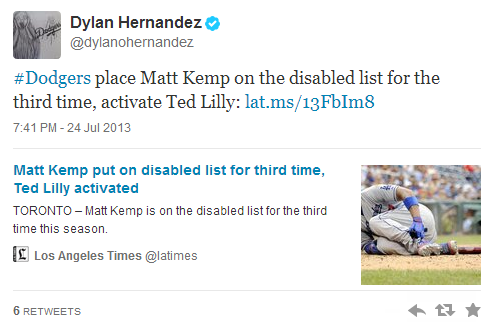 : Least we got Lilly back

Oh, I think Lilly got sent down. :(
Reply to cmaczkow