The Monday Takeaway
On Sunday afternoon, Jayson Werth hit two home runs, he and his teammates went hitless with runners in scoring position, and the Nationals lost, falling to two games under .500.

On Monday morning, the Nationals fired hitting coach Rick Eckstein, scapegoating him for the team’s season-long struggle to drive in runs, and named Rick Schu as his replacement. Davey Johnson was not pleased with the decision, which came just a month after general manager Mike Rizzo insisted that Eckstein’s job was safe.

And, hours later, Jayson Werth hit two home runs, he and his teammates went hitless with runners in scoring position, and the Nationals lost, falling to three games under .500 for the first time since September 24, 2011.

Schu will not join the big-league club until Tuesday, and even if he had been in the dugout to witness Monday night’s loss to the Pirates, it would be unfair to judge the decision to fire Eckstein on one game. Still, in light of Johnson’s comments and the other clubhouse reactions mentioned in the afore-linked story by Adam Kilgore of the Washington Post, the hitting-coach switch smacks of an organization grasping at straws.

That’s what happens when a club many favored to win its division and build on a breakout 2012 campaign tumbles into third place, a season-high eight games behind the first-place Braves, and now looking up at the Phillies, a team generally perceived to be trending downward. The Nationals were 6-for-72 with runners in scoring position over their previous nine games heading into Monday’s series opener versus the Pirates, and they had lost seven of them. Now, they are 6-for-75 over their past 10 contests, of which they have dropped eight.

The Nationals rallied in the ninth inning against Jason Grilli, plating two runs on Werth’s blast, which followed a leadoff walk drawn by Adam LaRoche. But after Denard Span doubled with one away, Wilson Ramos struck out and pinch-hitter Steve Lombardozzi grounded out—against Vin Mazzaro, who entered when Grilli left with an ailing arm—to seal the defeat.

Pittsburgh’s 58th win turned bittersweet in the waning moments, leaving the players downtrodden in the clubhouse and hoping that their closer’s painful injury is not as serious as it looked. Washington’s 51st loss was simply bitter, with little sweetness to wash that taste away.

Dan Haren, who flashed his vintage form in outings against the Phillies and Marlins heading into the All-Star break, resembled the vulnerable pitcher who served up 19 homers in 82 innings preceding those starts in his first assignment after it. Andrew McCutchen took him deep twice, accounting for four of the five runs charged to Haren in five innings of work. And in the eighth inning, the erratic Drew Storen uncorked a wild pitch that brought home what proved to be the game-winning run.

Werth became the first player to log consecutive multi-homer games since Ryan Raburn went yard twice each on April 29 and April 30 of this year. But his more notable accomplishment may have been doing it in back-to-back losses, a feat that no hitter had pulled off since then-Cubs third baseman Aramis Ramirez—in a bizarre calendar coincidence—did so on July 21 and July 22, 2006.

LaRoche, who homered in the fifth inning, told reporters that even coming within one run served as a moral boost “at this point” in a frustrating season. Johnson called it “a bad day,” then praised the character of his squad and said that “a little momentum” is all the hitters need to get back on track.

But the skipper prefaced the second part of that assessment with “I’ve said it 100 times,” unintentionally underscoring the depth and length of the Nationals’ lull. With their playoff odds now longer than one-in-eight, the Nats can’t afford many more bad days. The long-awaited momentum had better come soon.

Monday’s Matchup in Review
Another Wade Davis start, another loss for the Royals, who have now suffered a setback each of the last five times the right-hander has toed the rubber. Davis lasted only 2 2/3 innings on Monday night, allowing seven hits and three walks, which—in concert with a Mike Moustakas error—resulted in four Orioles runs (two earned).

Chris Davis, Wade’s counterpart in the highlighted matchup, drove in the game’s second run with a sacrifice fly in the opening frame, waiting back on a calf-high curveball and flipping it deep enough into left field to plate Manny Machado. He worked a 3-0 count leading off the third inning, took a strike, and then lined the fifth consecutive fastball in the at-bat to left field. Five batters later, Wade Davis was on his way to the showers.

Chris Davis, along the other left-handed or switch-hitters in Buck Showalter’s order, combined to go 7-for-9 with three walks and a sacrifice fly in their 13 plate appearances versus Wade Davis, exposing the right-hander’s most glaring flaw yet again. The Orioles’ first baseman added a double—his 30th of the season—later in the 9-2 victory, and finished 2-for-4.

Matchup of the Day
Ben Zobrist has seen plenty of Jon Lester over their years in the American League East, and, in the Rays’ mind, they have seen far too much of each other. In 51 career plate appearances against the Red Sox lefty, Zobrist is just 9-for-45 with three extra-base hits (three doubles and a homer), six walks, and a whopping 17 strikeouts. Add all of that up, and you get a .200/.294/.311 triple-slash line, Zobrist’s second-worst showing among all left-handers that he has faced at least 30 times (CC Sabathia, .573 OPS).

The 32-year-old switch-hitter’s numbers are down this season, with his OPS sitting below .800 for the first time since 2010, but he continues to provide intriguing power and speed for a versatile player who is a defensive asset both at second base and in right field. Although Zobrist has handled righties and lefties about equally well over the course of his career, posting a .302 TAv versus the former and a .316 mark against the latter, southpaws have been responsible for much of his decline in 2013, holding him to a .598 OPS and just one homer in 133 plate appearances.

Much of the trouble is illustrated in the above plot: Zobrist just isn’t punishing hard stuff in the strike zone the way he did in previous years. He is hitting .304 against left-handed fastballs, but just .143 on cutters and .115 on sinkers, with an almost impossibly poor .125 BABIP. His batted-ball luck should turn soon, but as the dearth of power suggests, Zobrist must account for his fair share of any second-half rebound, too.

Lester, whose first start after the break was pushed back from Sunday to tonight, endured a rollercoaster first half. He was solid early, shaky in late April, solid again in early May, shaky later that month, awful for most of June, and better since the calendar turned to July. The net result: a 4.58 ERA and a 4.19 FIP, which indicates that the 29-year-old is responsible for much of the damage that he has incurred to date.

Lester’s base numbers are a bit better than they were during his 2012 collapse, but his walk rate is actually up from 7.8 percent last year to 8.4 percent so far in 2013, and his strikeout rate has not bounced back to its pre-2012 levels, staying around 19 percent through 20 starts. His 8.46 percent curveball whiff rate is the lowest of his career. 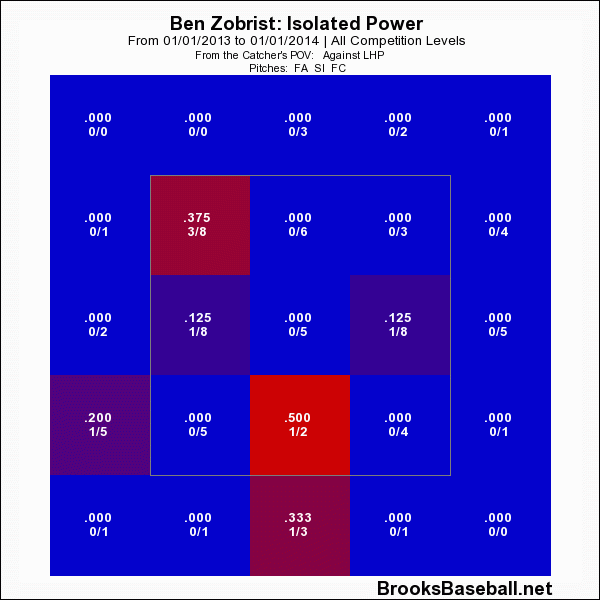 In terms of pitch and location selection, Lester has treated Zobrist much like he has treated the bulk of the right-handed batters who have stepped in against him: cutters under the hands, changeups down and away, and curveballs all over, with an emphasis on those darting toward the hitter’s back foot. Zobrist has been impressed, and even amid Lester’s continued rut, he has managed only one hit in 10 head-to-head at-bats this year.

Unfortunately for Lester, only the fastball and changeup have done the trick so far this year. Opposite-handed hitters are batting .273 with a .418 slugging percentage off his cutter and .353 with a .441 slugging percentage versus the curveball, with the bender accounting for just five right-handed strikeouts since Opening Day. Past trends suggest that Lester may not need to be particularly sharp with the cutter and curve to retire Zobrist, but the likes of Evan Longoria and Wil Myers could prove tougher to retire if he is unable to hit his spots (7:10 p.m. ET).

You need to be logged in to comment. Login or Subscribe
mschieve
It's probably the natural or safe reaction for the manager to be reportedly unhappy, or upset with the decision of the team's hitting coach being fired.

I believe this happened last year with the Angels. They fired their hitting coach and I recall that Scioscia was also upset by the decision of management.
Reply to mschieve
Lindemann
The Nats are flailing. But it's easier to get a new hitting coach than a new center fielder, third baseman, first baseman, et alia. (They already got a new second baseman.) Someone's gotta take the fall.
Reply to Lindemann