Matchup of the Day
Right-handed-hitting Andrew McCutchen has always done his best work versus left-handed pitchers, but he has more than held his own against like-handed hurlers, too. McCutchen carried a .292/.366/.440 triple-slash line against righties into this year’s All-Star break, numbers that understate his true offensive value because he also went 17-for-19 on stolen-base attempts.

One righty who has had no trouble slowing McCutchen down, though, is the Reds’ Mike Leake. In 42 head-to-head plate appearances, McCutchen is just 8-for-38 (.211/.286/.289) against Leake with one extra-base hit (a home run), two walks, eight strikeouts, and a couple of plunkings. Leake ranks ninth in the majors with a 2.69 ERA this year, even though he has made eight of his 18 starts in the treacherous confines of Great American Ball Park.

The 25-year-old Leake keeps the ball on the ground—his 51.1 percent worm-killer rate is the 16th-highest among qualifying starters—and does not dole out many free passes, placing 21st in that same bunch with a 5.5 percent walk clip. He has induced 15 double-play balls, the seventh-best total in the league. And arm-side hitters have amassed a combined .218/.276/.287 triple-slash line against him in 2012, similar to McCutchen’s overall body of work, which dates back to April 16, 2010.

All that red in the lower-right corner of the strike zone is bad news for McCutchen. According to the data on his Brooks Baseball card, Leake throws his slider and cutter 19-20 percent of the time each to right-handed batters. With McCutchen in the box, though, he has unfurled one of those two out-moving offerings on half of his deliveries, per the Matchup page linked above.

And here is why: 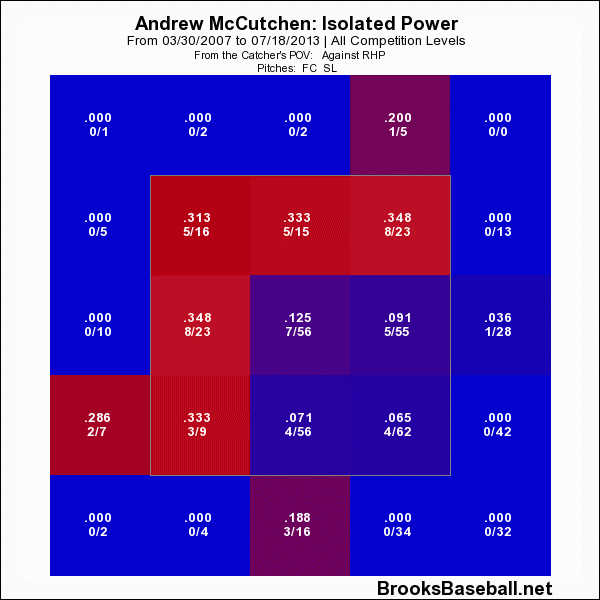 McCutchen can’t hit them. Leaving sliders up on the outer third can spell trouble, and McCutchen is capable of punishing backed-up sliders that stay inside, but pitchers like Leake, who command the offering well enough to hit the knee-high, outside target, are his Kryptonite, rendering him a singles hitter on the few occasions when he does reach base.

McCutchen went 1-for-2 in his most recent meeting with Leake, on June 17, collecting a single on a poorly placed changeup and getting drilled later in the contest, and he is 2-for-8 against the Arizona State product this season. McCutchen’s lone extra-base hit off of Leake, the long ball on August 21, 2011, also came on a center-cut changeup. His other head-to-head knock this year, back on April 12, was the fate of a sinker off the inside corner that followed a get-me-over slider.

The game plan here seems obvious: cutters and sliders away, and caution when throwing sinkers or changeups. McCutchen has feasted on right-handed sinkers on the inner third throughout his career, and Leake has done an excellent job of giving him very few opportunities to do so, as the gap on the Strikezone Location Plot above can attest.

Leake is unlikely to try to fix an approach that is not broken, so McCutchen must make the necessary adjustments if he hopes to reverse his fortunes. And the Pirates, after scraping across only one run in 13 innings in their last two showdowns with Leake, need more from their no. 3 hitter to maintain their four-game edge over the Reds through the weekend (7:10 p.m. ET).