A couple of pitchers enjoyed breakout performances during the first two months of the season, only to wake up from the dream once the calendar flipped to June. Our inner statistician can easily wave these trends aside as the inevitable magnetism of regression to the mean, but I’ve found that reality often follows a more intricate path, with much to be learned through the analysis of outlier performances and small sample size.

Let's examine a couple of players who have fallen off from their early-season dominance in search of explanations that go beyond luck. In these cases, the “before” and “after” stats are split based on the arbitrary calendar date of June 1st.

Iwakuma started the 2013 season on an absolute tear. He allowed two earned runs or fewer in 12 of his first 14 starts and entered the June 16 game versus Oakland with a 1.79 ERA, but then his season got flipped turned upside down. He surrendered a four-spot to the A's in that contest, and Oakland tagged Iwakuma for another four runs five days later. The Mariner right-hander has not had a clean game since, as he has now strung together five consecutive starts with at least four earned runs allowed. The damage culminated in Tuesday's shellacking by the Red Sox, in which Iwakuma gave up six runs over three innings pitched. All told, he has been knocked around to the tune of a 6.83 ERA over his past 29 frames.

Aside from an improved walk rate, Iwakuma's stats have crumbled across the board—the K's are down, the hits are up, and more of those batted balls are leaving the yard. In fact, he has allowed 10 home runs over his past four games, which equals the number that he gave up over his first 15 outings. Interestingly, Iwakuma has walked just a single batter across 24 innings pitched in those four homer-filled ballgames.

Let's compare Iwakuma's dynamite start against the Angels on April 28 to his game of punishment versus Boston on Tuesday.

Baseball enthusiasts often treat ballplayers as if their talent level is static throughout the season, and conventional sabermetric wisdom scowls in the direction of concepts such as a “streaky” player or the “hot hand.” Yet player skill is ultimately a dynamic process with multiple dependent variables, and much can change for a pitcher from month to month and even start to start. The Iwakuma who took the mound earlier this week did not have the same available skill-set as the one who toed the rubber in Seattle on April 28. Consider the following heat map, which charts the location of his pitches in the Angels game: 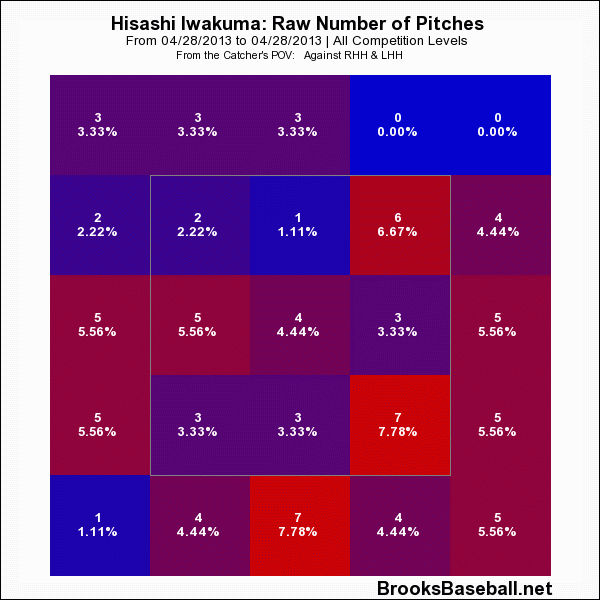 Iwakuma spread the baseball all around the zone against Anaheim. He had devastating command of his entire arsenal, but the fastball stood out with an 80-percent strike rate and nine swings-and-misses, including five strikeouts. Iwakuma's ability to elevate the fastball allowed him to change batter sight-lines with his slider and split, triggering late swings from hitters who could not hone in on a predictable pitch location.

Just 10 weeks have passed since Iwakuma hurled the gem versus the Halos, yet his heat map has cooled considerably: 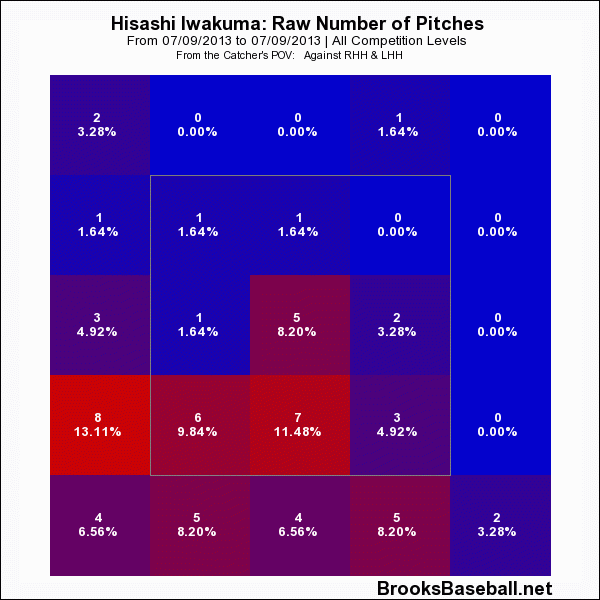 Iwakuma had no problem getting the ball down against the Red Sox, but he completely lost the ability to hit targets above the belt. His trademark splitter wasn't fooling anybody, as he failed to generate a single empty swing on the 12 that he threw on the day. Boston batters were able to key in on pitches that were low in the zone, and those pitches that did find the middle-third of the plate got hammered.

In the above clip, rookie catcher Mike Zunino set up on the low-outside corner to David Ortiz, only to watch Iwakuma throw a fastball that drifted back over the middle of the plate and stayed thigh high for Papi to yank over the right-field fence. The third-inning pitch to Dustin Pedroia that left the yard was similarly elevated, and both of the bombs came on fastballs with Iwakuma behind in the count.

The majority of Iwakuma's pitches this day were over-rotated at release point, which occurs when the pitcher fires prematurely in the kinetic chain. Over-rotation is a common ailment among pitchers with slow momentum, so it shouldn't be surprising that Iwakuma dealt with some mistimed deliveries, given his blatant mid-stride pause. That said, he typically has a stronger burst following the halt of momentum, but appeared to have a slower second gear in Tuesday's game when compared to earlier in the season. The altered pace was linked to his lack of command in the vertical plane, and the issue will need to be addressed in order for Iwakuma to rediscover his ideal timing.

Miller has been a revelation in St. Louis during the first half of the season, carving out his case for not only the NL Rookie of the Year Award, but potentially some Cy Young hardware. He did not allow more than three earned runs in a starter until June 12 at Citi Field, though he failed to reach the six-inning threshold necessary to achieve a quality start in five of those 12 games. Miller struck out 10 batters against zero walks versus the Mets, making it easy to cast aside the four tallies on the scoreboard, especially when Miller came back to blank the Cubs in his next outing.

A bit of the luster has worn off of his potential trophies in the last few weeks. The Rangers came to town on June 22nd and hung another four earned runs on Miller's neck, with eight hits (including two home runs) in less than six innings of work. The matchup with Texas marked the start of a four-game stretch in which Miller has allowed 14 runs in 18.3 innings (6.87 ERA) and amassed 16 strikeouts and 10 walks—this on the heels of posting a K-to-walk ratio of nearly five-to-one during his first 14 ballgames.

The biggest blow came on June 28th against the Athletics, with Miller coughing up five earned runs and getting booted from the game before he could complete two frames. It was the shortest outing of the young right-hander's career, and a pattern emerges when comparing the Oakland meltdown with Miller's near-perfect game versus the Rockies on May 10th of this year.

Miller was clearly on his game in the contest with the Rockies, retiring every man he faced after allowing a lead-off single to Eric Young, Jr. Most impressive was the young right-hander's command of the fastball, which he was dealing at 93-97 mph while registering strikes at a 74-percent clip. Miller is essentially a two-pitch pitcher, with a combination of heaters and curves making up 95 percent of his offerings this season, and he pumps fastballs nearly three-quarters of the time. 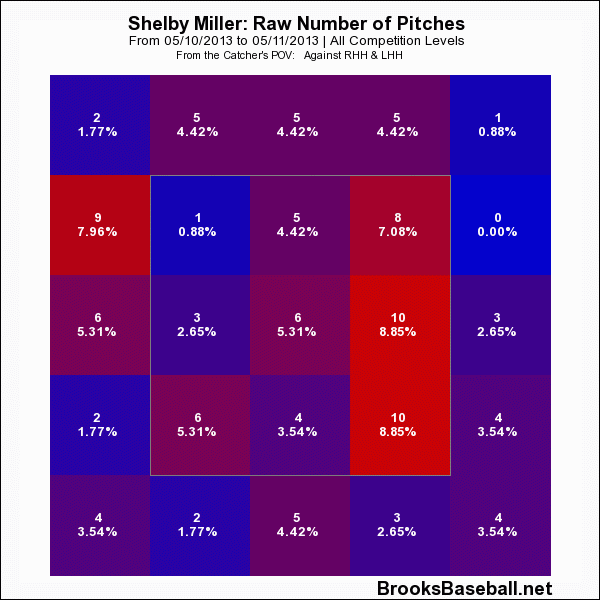 Such reliance on the four-seamer places critical value on Miller's ability to locate the pitch, and his ability to nail Yadier Molina's targets was nearly perfect against the Rox—all 13 of Miller's K's were rung up with the fastball, and an incredible eight of those punchouts were registered via a called third strike by the home-plate umpire.

Miller was painting the left edge of the zone (pitcher's POV) to batters from both sides of the plate, with a lethal combination of pinpoint command of his fastball and the superior pitch-framing abilities of Molina. But the deadly lasers that shut down Colorado had all but disappeared when Miller arrived in Oakland two weeks ago. 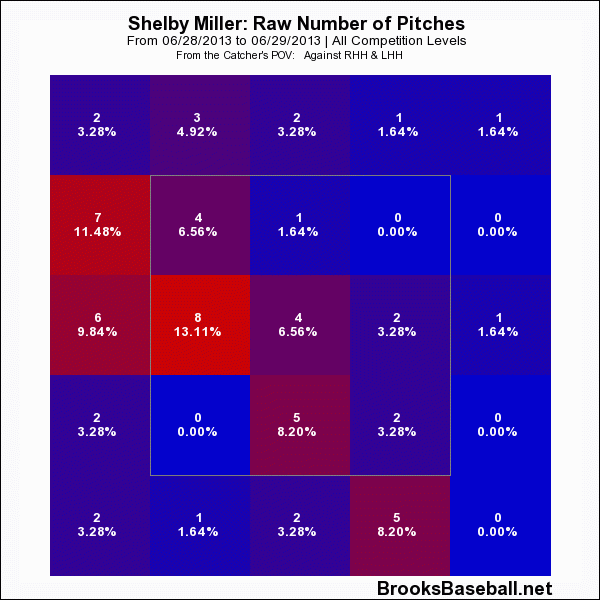 Miller completely lost the ability to target the left edge of the plate (from the pitcher's POV), and he struggled to find the lower shelf of the strike zone. He survived the first inning unscathed despite the foreshadowing of danger, thanks to a 5-4-3 double play following Coco Crisp's lead-off single, in addition to Carlos Beltran's running catch at the warning track to snag Jed Lowrie's deep drive to right-center field (which involved one of many misplaced fastballs for Miller on the day).

The second frame would prove to be more damaging, and though Miller kept the A's inside the ballpark, all it took was a nine-batter sequence to put a five-spot on the board and chase the young pitcher from the game. Even the outs that Miller registered in the second inning were crushed, including a hard-hit ball in the hole to the right of second base and a 390-foot drive to center field. Meanwhile, those pitches that survived contact shared a tendency to miss outside the zone, resulting in a pair of consecutive free passes that would soon come around to score.

Miller was running deep counts, going full to five different batters during the inning, and his inability to reach full extension on the fastball allowed Oakland batters to key in on the curve when a pitch traveled down in the zone.

The vast majority of the fastballs that Miller threw missed the intended target high and/or to the arm-side of the plate, indicating an issue with mechanical timing that is in the same category as Iwakuma's struggles, though pointed in the opposite direction. Miller displayed a heavy trend toward under-rotation, in which he triggered trunk rotation too late to reach full extension at release point.

The late arm can result from reaching foot strike before the upper body is prepared to fire, or by a player who exaggerates the delay between foot strike and trunk rotation. As a pitcher with plus momentum in addition to excellent torque that stems from a heavy delay of rotation, Miller naturally runs the risk of occasional bouts of under-rotation. Pitchers who have issues with under-rotation will struggle with elevated pitches and a difficulty with hitting targets on the opposite side of the plate, and these trends can serve as markers when evaluating Miller in his future starts. There is no need for Cardinal fans to panic, as Miller is just a minor adjustment away from finding his delivery, but he does have a significant hill to climb if he wants to summon the near-perfect timing that was on display against the Rockies in May.

You need to be logged in to comment. Login or Subscribe
woodruff11
What role do you think fatigue is plyaing in these mechanical flaws?
Reply to woodruff11
tombores99
Good call.

Fatigue could definitely be playing a role, particularly in Iwakuma's case. Yu Darvish was dealing with the same issue, with a noticeably slower second gear in his last few starts.
Reply to tombores99
Yefrem
Top notch analysis, as always. Your previous primers on pitching mechanics have allowed the layman to have a clearer understanding of how fickle and fleeting pitching can be. Likely, both of these guys will make the necessary adjustments, but it is cool to step into the mindset of a coaching staff on how to go about doing it.

Truly great stuff, Doug.
Reply to Yefrem
tombores99
Thanks for the kind words, Yefrem. I really enjoy opening up the conversation to a wider range of these on-field events, in order to better understand the context behind the numbers.

Reply to tombores99
brianjamesoak
Great stuff, Doug. One thing I noticed about Miller was that his velocity chart showed that he had both the highest average fastball velocities and the highest single pitch velocities of his whole season in his last two games. He also had some relatively low fastball velocities in the same two games. What do you think about that in relation to his recent struggles? I guess I am hypothesizing that he is feeling weak and trying to compensate for it by overthrowing, leading to reduced command/control. Or is it a result of the differing mechanics? Or maybe it's just a hiccup in Pitch F/X?
Reply to brianjamesoak