The Monday Takeaway
Two days before their scheduled return home to welcome the Tigers, the Indians earned a 6-5, series-opening victory over the Royals to move into first place in the American League Central, a perch they had not held since May 23. The Tribe snuck up on a scuffling Tigers squad that had lost six of seven, bouncing all the way back from its own eight-game skid in early June.

Over the last four days, though, Jim Leylandâ€™s club has reasserted its strength, ensuring that the Indiansâ€™ stay atop the standings would be a short one. The Tigers won the first two games of the four-game set at Progressive Field, running the home teamâ€™s losing streak to four contests and their own winning streak to five. A 9-6 victory on Sunday gave the Indians a chance to salvage a series split on Monday night, which would have left them just 1 Â½ games behind first-place Detroit.

To notch the split, however, the Indians needed to get past Max Scherzer, the first-half Cy Young Award favorite whose record was a flawless 13-0, and behind whom the Tigers had not lost since May 31. Fortunately, the three-man crew of Scott Kazmir, Bryan Shaw, and Cody Allen kept pace with Scherzer for seven innings, the duration of the right-handerâ€™s outing, and a two-out, two-run single by Lonnie Chisenhall in the bottom of the second proved sufficient to keep the game tied going into extras.

Allen and Joe Smith traded zeroes with Bruce Rondon in the eighth. Chris Perez put the pressure on Drew Smyly, but the young lefty matched his goose egg in the ninth. And in the 10th inning, after Matt Albers unraveled, Joaquin Benoit held firm.

A two-out, two-run double by Victor Martinez, which plated Miguel Cabrera and Prince Fielderâ€”who were both issued two-out walksâ€”proved to be the deciding blow. The Indians put two men on base with two away in the bottom of the 10th on singles by Nick Swisher and Michael Brantley, but Mike Aviles struck out swinging to end the game.

Come October, this 4-2 Tigers victory may seem inconsequential, just one game in a 162-game season. But Mondayâ€™s win provided the favorites with a bit more cushion, padding their already-excellent odds of winning the division and setting the Indians back in their quest to return to the playoffs in the first year of Franconaâ€™s tenure.

The closer role, one of the few major concerns that plagued Leylandâ€™s roster throughout the first half, appears safe thanks to Benoitâ€™s right arm, as the 35-year-old is now a perfect seven-for-seven in his save opportunities. With a 1.73 ERA and a 46-to-10 K:BB in 36 1/3 innings, Benoit has admirably answered the call that rookie Bruce Rondon and retread Jose Valverde could not. The Indiansâ€™ bullpenâ€”which had a hand in both of the losses in the Royals series before Mondayâ€™s extra-inning flubâ€”has looked to be the more porous unit of late.

With a deeper rotation, a more powerful heart of the order, and now a more reliable bullpen, the Tigers enjoy an edge over the Indians in virtually every areaâ€”save for defense, where Cleveland is in the middle of the pack and Detroit ranks at the bottom, and baserunning, where the Indians rate fifth in the majors and the Tigers again bring up the rear. The Indiansâ€™ return to first place was fleeting. And with no head-to-head meetings between the Central rivals for nearly a month, their next one is unlikely to come anytime soon.

Mondayâ€™s Matchup in Review
A finger injury kept Carlos Gonzalez out of the lineup, preventing him from doing any further damage to Edinson Volquez, but that reprieve did little to help the Padres. Corey Dickerson, who replaced Gonzalez in left field, went 1-for-3 with a walk at the top of the order, and Volquez failed to complete the sixth inning despite throwing 94 pitches. The Padresâ€™ 4-2 loss to the Rockies was their 10th in a row, and it kept them mired in the National League West cellar.

Matchup of the Day
Ian Desmond has picked up right where he left off this year, collecting 23 doubles and 15 homers in his first 87 games as one of the Nationalsâ€™ few consistent threats at the plate. Cole Hamels, meanwhile, followed up a career-best 4.1 WARP campaign in 2012 by sputtering throughout the first half, though his 3.62 FIP suggests that a summer surgeâ€”which may have started with his seven-inning, one-earned-run win over the Pirates on July 4â€”is in store.

Tonight, if past trends hold, the left-hander should have the upper hand on the shortstop. Desmond, a right-handed hitter, has generally performed well against southpaws, and he posted a .303/.331/.571 triple-slash line while enjoying the platoon advantage in 2012. But Hamels is one of the select few southpaws who have given Desmond fits, and the .635 OPS to which he has held him is Desmondâ€™s lowest versus any lefty whom he has faced at least 20 times.

Overall, Desmond has gone 5-for-28 with Hamels toeing the rubber, notching two doubles, a triple, and a home run. In their 30 head-to-head meetings, he has also walked once and struck out eight times. 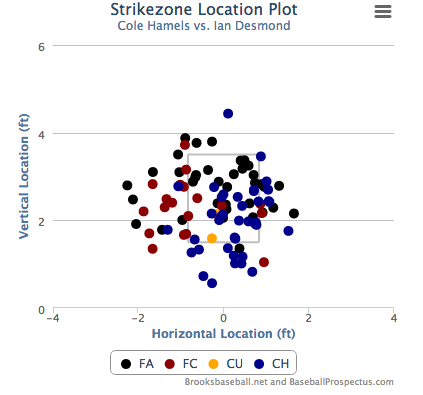 As you might have discerned from all the blue dots in the above plot, Hamelsâ€™ changeup has been the great equalizer against Desmond. He has used it as a put-away offering in deep counts, as a backward-approach setup pitch to keep Desmond off of his fastball, and even as a standalone piece that the 27-year-old cannot seem to touch. Desmond, who thrived on fastballs last year, is not an altogether poor off-speed hitter, but Hamelsâ€™ changeup is one of the best in the league, and all three of those varied plans has yielded a strikeout.

On the rare occasions when Desmond has gotten the better of Hamels, the culprit has almost always been an early-count fastball mistake. Desmond was one of the leagueâ€™s most aggressive hitters in 2012, when he averaged 3.37 pitcher per plate appearance (a mark trailed only by Erick Aybar, who saw 3.28), and though he has become more patient this year (3.71), he will not stare at many first- or second-pitch fastball strikes. Hamels learned that the hard way on April 7, 2010, when he teed up this gopher ball, and again on May 6, 2012, when this get-me-over heater turned into a three-bagger.

With the changeup affording Hamels an obvious two-strike-count advantage, the key for the left-hander is to force Desmond into a pitcher-friendly count or to coax him into swinging at a well-placed pitch early. Desmond is 1-for-18 against Hamels in plate appearances that have lasted three pitches or longer, and the lone knock was a single.

Given the various strategies that have done the trick in the past, Hamels can base his game plan for Desmond on what is working on this particular evening. If his fastball command is sharp, then he can paint the corners with the four-seamer or cutter to set up the changeup in deeper counts. If he has greater confidence in his off-speed arsenal, then he might choose to pitch backward or stick with the changeup exclusively if the shortstop steps in with runners on base. And since Desmond has only twice seen Hamelsâ€™ curveball, the element of surprise is in the leftyâ€™s back pocket, too.

Nonetheless, for all of the credentials on Hamelsâ€™ head-to-head rÃ©sumÃ©, it takes only one mistake to spoil a fine outing. Desmond has just one hit off of Hamels in the last two-plus seasons, but if a fastball crosses the middle of the plate, he will be ready to pounce (7:05 p.m. ET).

You need to be logged in to comment. Login or Subscribe
thetireswings
"They [the Indians] will try to carry the momentum from consecutive wins against the Tigers into the series opener, in which they will face Josh Johnson (7:05 p.m. ET)." - Uh, as a Tribe fan, I wish this were accurate, but they lost last night and only one 1 of the 4 game series.
Reply to thetireswings
statsrath
Fixed, thanks.
Reply to statsrath
DetroitDale
Two things I wanted to point out on the last game of that tigers tribe series. First the walks to Cabrera and Fielder were semi-intentional. While the approach didn't work in this game, I am surprised that more teams haven't tried it, especially while Martinez was struggling.

The other thing was the weather. It rained on and off the entire night and the field was in terrible shape because of it. There was one very short rain delay early on (chisenhalls 2 run single was on the first pitch back, but I digress) but the rain got much worse later and the umpire could have and probably should've called more delays or even cancelled tba game. Nick swisher fell rounding third preventing him from scoring a key run and It's just dumb luck some player didn't fall and get hurt. These are division rivals so there would have been other chances to make up the game. The author was right to call this game a turning point and while I'm glad it turned in detroits favor, I have to question the decision not to call the game. The fall could just as easily have caused a serious injury rather than just a run and some embarassment.
Reply to DetroitDale