Due to the popularity of our special July promotion, we are excited to announce that, for the ENTIRE month of September, all those who sign up for one-year Premium subscribers (either a new subscription or renewal) will receive a free PDF and e-book copy of the 2013 Futures Guide by Jason Parks and the BP Prospect Team!

Baseball Prospectus is a collection of the game's finest analysts, committed to providing intelligent, high-caliber analysis of our favorite game in books, online, and on radio and television.

Each weekday, Baseball Prospectus Premium brings you the best baseball content on the Web from its stable of talented writers. Whether you're interested in news, commentary, analysis or humor, BP's staff brings you the best around on a daily basis–and with over 1000 articles a year, you'll be paying less than five cents an article.

And for a limited time, with the purchase of your Premium subscription, you'll also receive a copy of the Baseball Prospectus Futures Guide 2013, built around the best of Jason Parks and the BP prospect team's pre-season Premium prospect material including:

The Guide is 278 pages long and features statistical workups, including 2013 and 2014 PECOTAs, for almost every Top 10 Prospect. It also includes a new foreword by Kevin Kerrane, author of the soon-to-be-republished Dollar Sign on the Muscle.

So what are you waiting for? Purchase a new subscription today by clicking on the following link, and you will receive a PDF and e-book copy of the 2013 Futures Guide in your online account profile (via the "Manage Your Profile" link) within 48 hours! It's that simple. 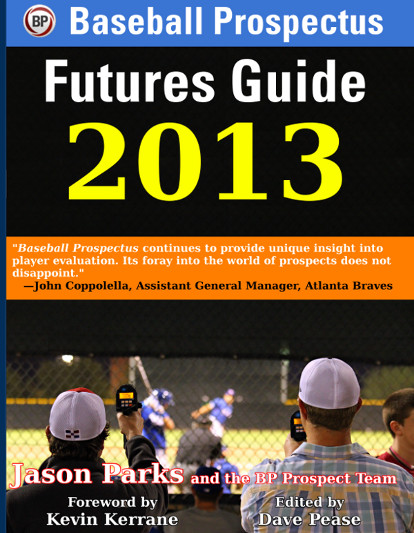