It’s time for another episode of Feature Focus! Now this is the last time we’re doing the home game… I know, I know.

Oh, wait, that’s the episode of Press Your Luck where TV game shows were broken forever. Instead, we’re going to talk about the BP player cards. A key note is that I’m showing off the full cards, including subscriber-only features, so if you don’t see all of these things, you may want to get yourself a subscription.

At the top of the cards you have a summary of important data:

There’s a quick snapshot of the PECOTA projections (rest-of-season projections for players in the depth charts, preseason PECOTAs for those who aren’t in the DCs), biographical data, and the WARP bar graph to compare years at a glance. Current season is a combination of season-to-date WARP and projected WARP from the depth charts.

Remember, PECOTA stats displayed are for the full season, not broken out by position/lineup order.

Next, we have a player’s actual stats: 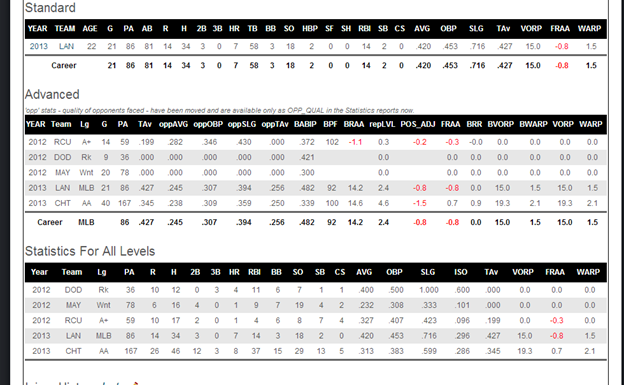 Standard is a mix of official stats and advanced measures for the majors only. Advanced is all advanced measures for all levels, with the caveat that some stats are not available for all levels. “Statistics For All Levels” shows the same display as standard, but with minor league stats included as well. (Complete definitions for all these terms can be found in the glossary.)

After that, we have some data that can be loosely termed transactional data. We have our injury reports:

This doesn’t just cover disabled list moves—if a player is day to day or has surgery in the offseason, it shows up here as well. There are two ways of counting time missed—days is actual days, and games is team games played. We also discuss where the injury happened, what kind of injury it was, and if applicable, when surgery occurred and when the injury was reaggravated.

Following that is our compensation data:

Most of this will be familiar to you from last week’s Feature Focus on Cot’s. There’s salary by year (including future commitments), service time, the agent, and details on contracts, plus a breakdown of career salary.

And finally, we have the extended PECOTA section of the cards:

The important point to remember here is that unlike the PECOTA figures at the top of the card, these aren’t updated in-season, but instead are based on the preseason forecast. Percentile forecasts are all keyed off the primary value stat—so for batters, the batting line illustrates what a typical production line from that player would be given the True Average listed. It’s tailored to a player’s individual skill set—a power hitter’s batting lines will look different for a player with the same TAv but a more slap-happy type of bat—but it’s designed to illustrate that level of performance, not indicate the range of performance in that stat overall. The diagnostics are based on the behavior of a player’s comps in the following season, compared to the baseline projection (a weighted average of the five previous seasons—so improvement means improvement over the baseline, not over the preceding season, for instance).

Below we also feature player comments from past annuals, as well as links to articles and author chats that reference that player.

Have other questions about the cards? Suggestions? Requests for a future Feature Focus (try saying that three times fast)? Leave them in the comments below.

You need to be logged in to comment. Login or Subscribe
Shankly
A subscription is well worth the price.
Reply to Shankly
doog7642
Can you give us an update on the re-imagining of UPSIDE?
Reply to doog7642
felixhill73
It'd be nice to see actual performance to data at the top with the important data. PECOTA is great, but one often wants to see the past (actual results) as much as the predicted future, especially since there are no confidence intervals on the prediction.

NH
Reply to felixhill73
sahmed
Colin, have you guys switched back from the equal weighting of previous seasons? Or is this referring to a different step:

"The diagnostics are based on the behavior of a playerâ€™s comps in the following season, compared to the baseline projection (a weighted average of the five previous seasonsâ€”so improvement means improvement over the baseline, not over the preceding season, for instance)."
Reply to sahmed
jfmoguls
Yes, I have a question about the player cards.

The "platoon" chart, on the left hand side. I get the black, red, and blue lines but why are there four sets of them? That is, what to the four horizontal divisions in that graph represent? It's probably really obvious and I'm going to feel dumb, but I can't figure it out.

(I know this is an old post and you might not see this question)
Reply to jfmoguls
mcquown
It's not you, and could certainly be more clear!

The four vertical categories are for AVG, OBP, SLG, and TAv.

If you look at Matt Holliday, for instance, you'll see that his multi-year split has been -.009 AVG. And the very top blue graph bar extends 9/10 of the way to the first tic, which is at -.010. Likewise, the next bar is red (for 2012 splits) and extends 2.8 tics - consistent with his -.028 platoon split for 2012. I hope that helps explain it.
Reply to mcquown
jfmoguls
Thanks Rob.
Reply to jfmoguls