Welcome to another installment of Feature Focus. I’m your host, Colin Wyers. When last we checked in with our intrepid he… oh, sorry, wrong spiel. The point of Feature Focus is to put a spotlight on what’s available at Baseball Prospectus and help guide you around.

With the trade deadline coming up soon, a lot of people are going to be wondering about player salaries and contracts. We have two products that can help with this.

The first is Cot’s Contracts, which is a team-by-team breakdown of player contracts, including salary and other details. Let’s look in at the Chicago White Sox, who according to GM Rick Hahn are already getting inquiries from other teams around the league. Let’s start with the view from the top: 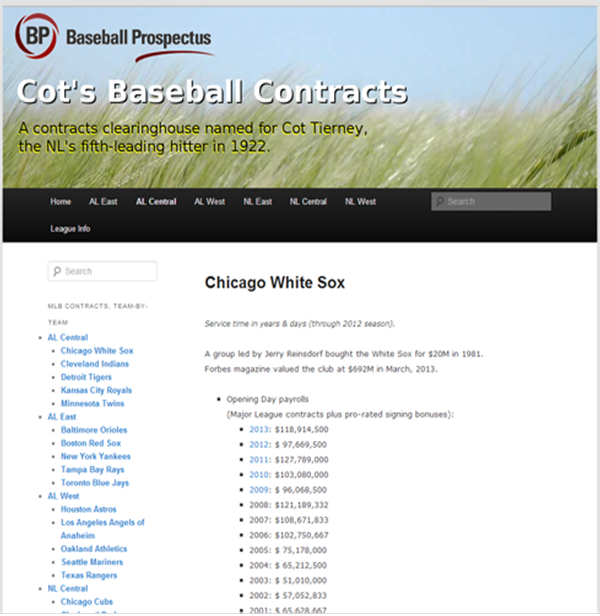 You’ve got the ability to select divisions up top or in the sidebar to the left, plus summaries of Opening Day payroll. As you scroll down, you can look at details for every notable player on the team’s 40-man roster. Alex Rios came to the White Sox after a post-deadline waiver claim, and he’s a guy who could possibly be on the move again: 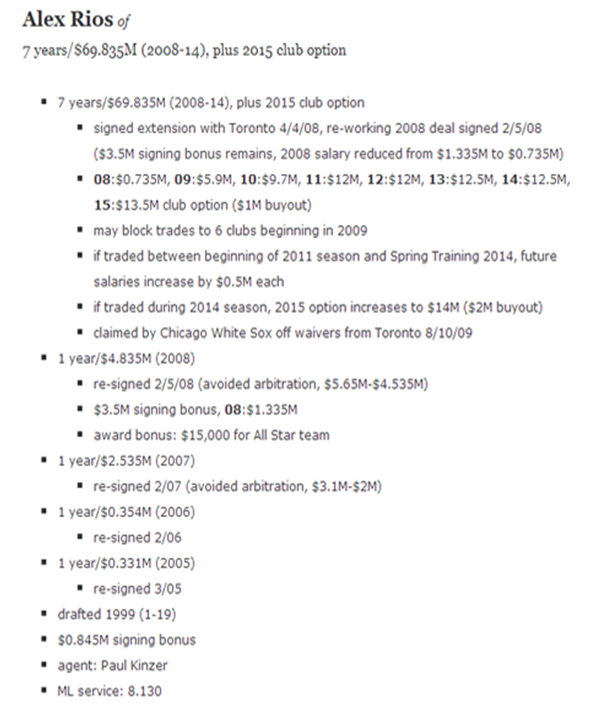 It’s all there in black and white – his salary, options, any no-trade projection he may have, his service time and his agent.

There’s another way to look at contracts, our Compensation Browser. Let’s look at the league first: 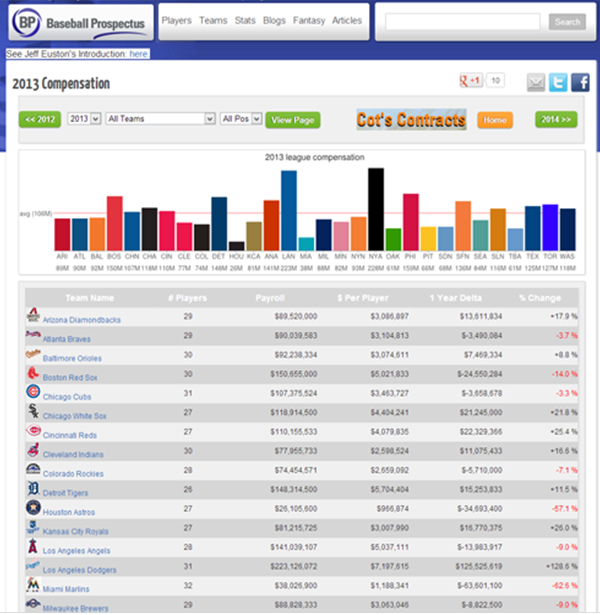 You can see team salaries compared at a glance in the bar chart (the White Sox are just a shade above league average), as well as get details in the table below. There’s total number of salaried players (which varies because of players on the disabled list and minor leaguers who were drafted to major league contracts), total payroll, average payroll, and change from 2012 payroll. Now let’s look in at the White Sox in particular: 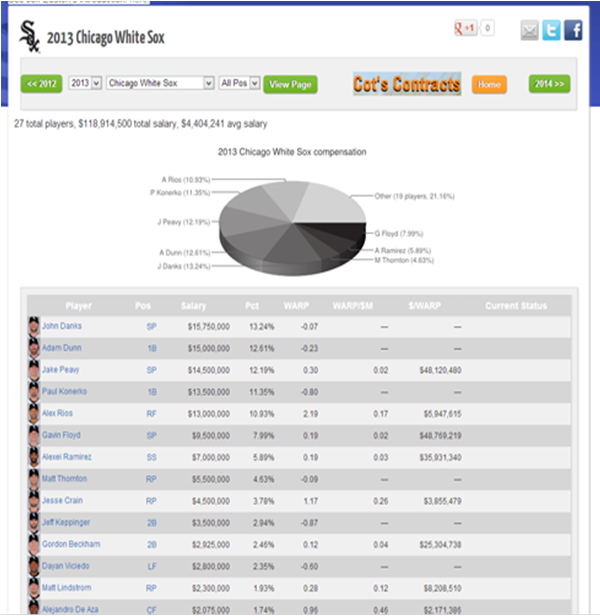 You can see what players are taking up the largest amount of payroll—that’d be John Danks, which frankly wasn’t what I would’ve expected, followed by Adam Dunn and Jake Peavy, which is more like what I would have expected. You can also see how their salary relates to production. Danks has been both hurt and ineffective, so because of his negative WARP we don’t even calculate a cost. Now, bear in mind that these are all partial seasons—those dollar values will all drop as the season goes on (or at least, so we hope).

Miss the level of detail from the Cots page? It’s all there, actually. Simply hold your mouse over a player’s name to get the details as they appear on the player cards and Cots:

So there you have it, two ways to look into player salaries, options and contract details. Have any questions? Comments? Have a feature at BP you’d like to see explored? Leave a note in the comments.

You need to be logged in to comment. Login or Subscribe
Shankly
Jordan Danks?
Reply to Shankly
bornyank1
Switched to John Danks. Say what you will about Jordan--he works cheap.
Reply to bornyank1
Burlap
I haven't found it if it's possible, but is there a way to look at the team payrolls over time, with columns for years, like the team salary pages on Hoopshype?
Reply to Burlap
AndrewKoo
If you navigate to the team page, and click on the hyperlinked years, it leads to a Google Spreadsheet and lists the year-by-year salaries. Here's the 2013 Yankees:

https://docs.google.com/spreadsheet/pub?key=0Ah4PW47PiAi-dHlNa3NEdk5laU5raUVXX0FSQ2ZQV0E&output=html
Reply to AndrewKoo
Burlap
Great, thanks. For clarification for anyone else puzzled, the team page is the Cot's team page and not the compensation team page.
Reply to Burlap
merussell23
I would love if you guys could come up with a way of including estimated pre-arbitration and arbitration values in future years for players not eligible for free agency and that haven't signed multi-year contracts. I know that those players are not technically under contract for those out years, but it seems like it would provide a truer glimpse of what the roster/salaries might look like.
Reply to merussell23
GrinnellSteve
As a Sox fan, this page is so depressing.
Reply to GrinnellSteve