R.G. (Reggie) and J.B. have a lot in common. Both were born in smallish, Midwestern cities—Chickasha, OK (pop: 16,000) for Willits, and Westerville, OH (pop: 36,000) for Shuck. Willits’ favorite player was Kenny Lofton—he wore no. 77 in the majors in honor of Lofton, who wore no. 7. Shuck’s favorite player was Kenny Lofton, and he says the dozens of Lofton cards he owns are his most prized. Both would grow up to be large by human standards but small by baseball standards, each standing 5’ 11”. Their birthdays are separated by just two and a half weeks on the calendar, so when they were going through Little League and high school sports, they would have both been about the same age at each level. Shuck hit .576 in his senior year of high school, playing outfield and pitching; Willits hit .598 his senior year of high school, playing outfield and catching. Each went to college, and each stayed in his home state to do so. Willits was drafted in the seventh round. Shuck was drafted in the sixth.

They’re all but identical as players, with the exception of their left/right orientation. Each player’s minor-league lines:

Through age 25, each had played more than 20, but fewer than 40, games in the majors. Each got his first extended shot at age 26. Each tickled Mike Scioscia’s fancy:

(Which quote belongs to which player is irrelevant.)

Each has produced an on-base percentage in the majors higher than his slugging percentage. Each did so while playing a corner outfield position. Through age 26, Willits had struck out 1.2 times for every walk in the majors, a sterling rate. Shuck has struck out exactly once for every walk. In his final season, Willits swung at 40.7 percent of pitches, a sign of his great patience. Shuck, this year, has swung at 40.8 percent of pitches. Each player, through age 26: 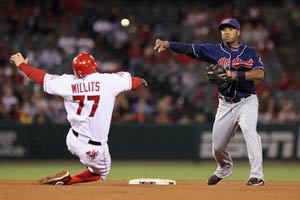 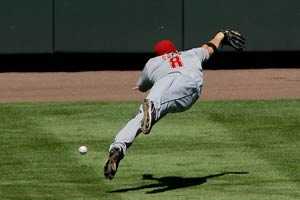 It’s easy to slice the bread too thin, but you can pretty quickly formulate a query based on these guys’ major-league stats that excludes every player in major-league history besides them. For instance, through age 26, players who played 50 percent of their games at a corner outfield spot, with

Cuts it down to just five players: our two heroes, plus Greg Gross, Jerry Hairston, and Jim Lentine. We need only one more filter to get it down to Willits and Shuck, which is where this has been leading.

On Wednesday, J.B. Shuck did this 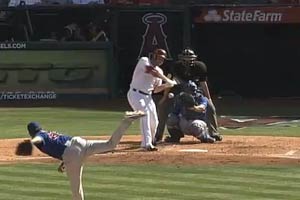 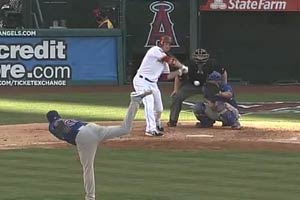 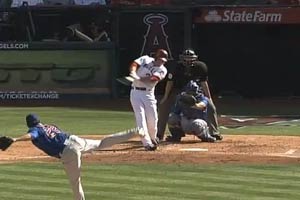 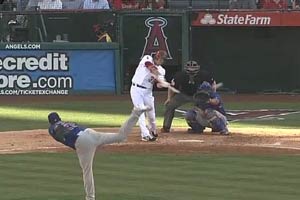 Once when he got it, Shuck turned on it, and the other time he slapped it. Obviously, they aren’t the same pitch exactly; the one on the left was inside and forced him to pull it, which is exactly the point: he has to be forced to pull it. Shuck, like Willits, has two ways to stay in the majors: by being good, or else by being likeable, playing the game in a way that is identified by those around him as The Right Way. Being good is better, of course, but it’s not a bad idea to hedge one’s bets. It worked for Willits for a long, sub-replacement stretch. So besides being poorly designed to hit balls over the fence, like the one he hit Wednesday, Shuck is also limited in how often he can even try. On Wednesday, everything lined up, and he got that first home run.

And, just as quickly, lost it. The play was reviewed and umpires overturned it, calling it foul.

How close did Shuck get? One way of saying is to note that the Angels’ radio broadcasters thought that it was a home run even after watching the slow-motion replays. Here’s a screengrab: 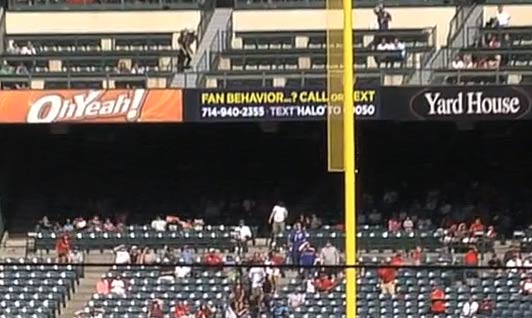 I couldn’t find a single quote from Shuck about the lost home run after yesterday’s game. It’s possible the reporters were kept out of the clubhouse a few extra minutes (not uncommon after a tough Angels loss) and most of the players got to flee. It’s possible the regular beat guys had the day off before a travel Thursday, and so nobody cared enough to ask him. In Shuck’s absence, we’ll have to make due with a years-old quote from Willits:

"I've been close several times," says Willits. “I'd like to sneak one over the wall just to get the monkey off my back."

Willits is one of the absolute marvels of the sport. Not only did he never hit a home run; he went literally years without getting close. Here’s his spray chart, incomplete but stretching back to parts of 2007:

That ballpark underlay is obviously not representative of every park he ever hit in, but imagine for a minute that it is: Willits never hit a ball to the warning track. Those green dots down the line are doubles that rolled to the wall, rather than landing on it. Here is, as far as I can tell, the farthest he hit a ball safely in the PITCHf/x era: 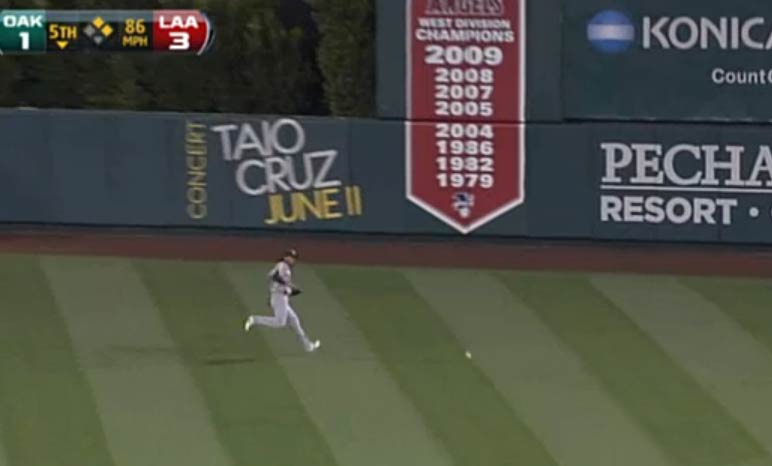 And yet Willits, perhaps the least threatening hitter in baseball, managed a career walk rate that is better than those of Kevin Youkilis, Mark Teixeira, and David Wright. All he wanted to do was take pitches and yet, in his final season, 2011, when he slugged .091, when he slugged .300 in the Pacific Coast League, when he slugged .250 in the High-A California League, pitchers still threw him about as many pitches in the strike zone as they threw Joe Mauer, Alex Gordon, Nick Swisher—and far fewer than they threw Shin-Soo Choo, Rickie Weeks, Dustin Pedroia, Derek Jeter.

Okay, in fairness, that was a terribly small sample and an extremely misleading list of names; in 2009 and 2010 Willits saw a considerably higher percentage of strikes, among the highest in the league. But the difference between Reggie Willits and Miguel Cabrera during his Triple Crown season is about eight pitches in the strike zone per 100 thrown, or not enough to detect without statistics. That is and always will be a startling fact. The appropriate strategy for Willits was to throw all strikes, all the time, and yet there was simply nothing Willits could do to convince pitchers to actually do it.

You’d be a fool not to miss Willits just a bit—he’s coaching high school ball back in Oklahoma now—but there’s a chance that you’ll not have to miss Shuck. It’s too soon to say that Shuck is a baseball miracle, like Willits was. After his first run through the league, his walk rate has dried up, and he hasn’t taken ball four in his past 39 plate appearances. Pitchers are throwing more strike-zone pitches to him than they’ve thrown to 80 percent of the league’s hitters.

And Shuck has hit more deep fly balls already than we have proof of Willits ever hitting. He has hit a ball that might have been a home run if the paint on the foul pole had been peeling just a smidge. He’ll probably do what nearly every player but Willits eventually does. For now, though, we have an extremely fun comp. After Wednesday, it might be baseball's most perfect comp.

You need to be logged in to comment. Login or Subscribe
ddietz2004
Ben just wrote a piece about Cardinals prospect Mike O'Neill the other day. The first player O'Neill reminded me of was Willits. According to the numbers O'Neill has yielded so far in the minors, Willits and O'Neill appear to be very similar players.
Reply to ddietz2004
km9000
Whenever I see that West Champs banner (which may not need updating for a while), I will always think of Willits. ...And Taio Cruz.
Reply to km9000