When you write for a team-specific blog, eventually you get to the point where you realize all those amazing and radical lineup ideas you have are wasting everybody’s time. It’s not that lineup changes have only small impacts—they do, but so what? Small margins are what team-specific blogging is all about—but that they’re usually non-starters. No manager is going to use that lineup-optimization tool; no manager is interested in hearing your The Book-inspired prescriptions. We’re not there yet. Baseball changes plenty from year to year, and has changed plenty over the past 100, but the basics of lineup constructions haven’t changed at all: 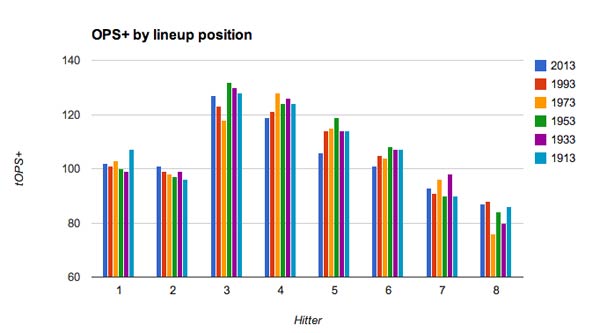 That doesn’t mean there never will be, and my guess is that, in 100 years, lineups will be optimized. Sometime between now and 100 years, then, something is going to happen to get us there, and it’s interesting to imagine what it’ll be. Maybe a manager for a team with nothing to lose will be the first to have a perfectly optimized lineup; maybe a big-name manager who wants to burnish his Creative Genius reputation will do it, get lucky and see his team go on a hot streak, and never turn back. More likely, though, the eventual optimization of major-league lineups will happen slowly, in small steps, as we reevaluate what each spot in the lineup is for.

Back in early May, a podcast listener named Thomas asked me and Ben a question:

I've noticed that a number of teams, seemingly for varied reasons, have been trending towards batting a strong hitter in the 2 spot, sometimes arguably their best hitter. Do you think this is a real trend, or maybe just a fluke as teams deal with injuries or crowded lineups, or am I just seeing what I want to see?

At the time, Ben looked at no. 2 hitters’ performance, found that (perhaps predictably) they had hit worse than leadoff, third, fourth, fifth, and sixth hitters, and we never talked about it on the podcast. But that doesn’t necessarily invalidate Thomas’ question; maybe no. 2 hitters have historically been even worse than they are now. Is Thomas right? And, if Thomas is right, is this the first step toward the radical realignment of batting orders?

First, the anecdotal evidence. There are four teams that are primarily using their best hitter in the second spot: the Angels with Mike Trout, the Twins with Joe Mauer, the Yankees with Robinson Cano, and the Blue Jays with Jose Bautista. You might say the same about the Cardinals and Carlos Beltran, but it’s not so clear-cut. Jose Altuve might be the Astros’ best hitter, but I don’t get the sense that any baseball traditionalists will be clutching pearls to see Altuve hitting second.

So that’s four or five teams with their best hitter in the second spot. Further, if we look at where this season’s no. 2 hitters were batting last year, we see a lot of players who, just a year ago, were seen as not no. 2 hitters. Here are the 30 players with the most plate appearances in the two hole this year, grouped by where they batted most frequently in 2012:

So the anecdotal evidence is strong. The numbers, though, aren’t nearly as suggestive. Just as when Ben looked a month ago, no. 2 hitters are hitting worse than five other spots in the lineup, and even with this infusion of former no. 3 hitters, they’re not (as a group) hitting significantly better than usually do. This table shows the OPS+ for no. 2 hitters each year, along with third and fifth hitters to provide something to compare against:

There’s maybe a glimmer of hope for no. 2 hitters there—if they aren't setting any new records this year, they’re at least near the top of recent history. But what we see is that there’s usually a fair amount of year-to-year fluctuation in this type of leaguewide split, and this year’s no. 2 hitters are well within the range of that fluctuation.

Again, we see the potential for loads of fluctuation from year to year, and again we see some not totally convincing evidence that 2013 might end up at the high end. The noisiest part of this table is that the top 20 hitters of 2013 are in a state of flux. The top 20 doesn’t include Mauer (28th in TAv) or Bautista (29th) or Cano (39th) or Manny Machado (59th) or Hunter (60th) or Joyce (25th). If a couple of those guys move up, then we could see an unprecedented number of plate appearances in the second spot from top 20 hitters. On the other hand, Jean Segura (17th) is all but certain to drop out of the top 20.

The anecdotal remains (to me) the strongest evidence, but the anecdotal cuts both ways. Looking at some of the best hitters who have been in the no. 2 spot, there are often circumstances that defy an Enlightenment explanation. Trout, for instance, is the Angels’ best hitter, one of the best hitters ever to hit second in any lineup. But he’s probably hitting second, rather than third, because manager Mike Scioscia is actually being conservative, leaving sluggers Albert Pujols, Mark Trumbo, and Josh Hamilton in the middle of the order and his speedy guy at the top. And Trout has moved to the second spot at the expense of the leadoff spot, so it’s not like this is part of a cohesive attempt at an optimized lineup. Cano has been batting second to break up the lefties in the lineup. Mauer is a great hitter, but a singles hitter—and he’s hit third, rather than second, five times in the past week.

But then there’s Bautista, and Bautista feels like something significant. You could find precedents for hitters like Trout, Mauer, and Cano in the second spot. But is there any example of the best home run hitter in baseball moving to the second spot? Maybe Eddie Matthews in 1959, batting in front of Hank Aaron while leading the league in home runs. Frank Robinson did it for one monster season, but it was his rookie season; young Alex Rodriguez batted second ahead of Ken Griffey, Jr., for his first four seasons. Curtis Granderson in 2011 might qualify, if you squint.

And nobody is making a big fuss about it, so far as I can tell. There aren’t columns in Toronto papers ripping John Gibbons for his unorthodox lineups. There’s no complaining coming from Bautista. It’s just, whatever, a lineup decision, everybody move forward. And, helpfully, the scuffling Bautista immediately started hitting better after the switch, with two hits in his first game there, a homer in the second, and a .325/.423/.566 line in nearly a month since.

So, whether or not this year’s no. 2 hitters truly are better than they’ve always been, this year’s no. 2 hitters might be more historically significant. If Bautista inspires Dusty Baker to move Joey Votto up, and if Joey Votto inspires Don Mattingly to move Matt Kemp up, and if Matt Kemp inspires Mike Redmond to move Giancarlo Stanton up, it might be the first step to undoing a century of lineup tradition. You’ll know it’s happening just as soon as sports columnists start writing angsty pieces complaining that teams’ best hitters are getting more at-bats than they used to in the good old days.

You need to be logged in to comment. Login or Subscribe
matrueblood
I love this, a close look at an interesting (if not life-or-death, even for baseball) issue. My favorite thing, though, is definitely that in 2011, only six PA from a top-20 hitter happened in the two spot. Awesome.
Reply to matrueblood
lyricalkiller
2001: Zero
Reply to lyricalkiller
jdeich
It might be interesting to address this question more broadly. You could simulate the outcomes of different lineups and look at the production gap between the optimal lineups and actual lineups as a function of year. in theory, as MLB offices warm to advanced analysis, that gap should decrease.

A separate question might be how the #2 spot should be filled by good teams vs. bad ones. Does the answer change if you're the Tigers, with figuratively and literally huge #3/#4 hitters, but not a ton of talent elsewhere? What about the historically-bad Marlins?
Reply to jdeich
Scartore
First you have to convince Dusty to bat a GOOD hitter in the #2 hole.
Reply to Scartore
jfranco77
I was going to say, how much better would the composite stats for this year's #2 hitters look if not for Zack Cosart? But Cosart has a 92 OPS+ in the 2 hole this year so it's not really his fault.
Reply to jfranco77
randolph3030
That first graphic is lovely to look at, like the sunset in a well-made video game.
Reply to randolph3030
JubsV1
How long before everybody bats the pitcher in the #8 spot?
Reply to JubsV1
Ogremace
What about following up on the idea of bad hitters hitting second. As in, rather than asking if we're seeing the better hitters in the game batting second, are we seeing fewer poor hitters bat second? This could be part of a trend, as managers begin to see the 2 spot as a high PA, high importance spot rather than a gap between the leadoff hitter and heart of the lineup. It seems like this might be a more likely way for this trend to start occurring, certainly one that's less "controversial" to traditional tactics.
Reply to Ogremace
nschneider
At least in the case of Bautista, I don't think the move will be permanent. The Blue Jays had so many hitters struggling early (and lost Jose Reyes a week into the system), that it seemed Gibbons was trying a different lineup every day. They had tried Lawrie lead-off, but he wasn't hitting/getting on base at all, so then Gibbons just dropped Lawrie down in the lineup and moved the 2-6 hitters up a spot. Just as last year, when Lawrie and Rasmus went on a one-month tear after being moved to the 1-2 spots in the order (before both suffering injury), almost everyone started hitting better. However, when Reyes returns, I think they'll put him back in the lead-off spot and slide everyone else down.
Reply to nschneider
Shankly
Great stuff. Love it.
Reply to Shankly