Jeff Samardzija has become one of my favorite pitchers. But for a few years, he was a thorn in my side. Okay, maybe more like two thorns.

The main thorn was his uneven performance. Some of it was easy to understand. Despite his impressive athleticism and arm action, he was more of a wide receiver than a pitcher. And the amount the Cubs paid him to choose baseball over football made his struggles even more difficult to watch.

The second thorn was related to the first. The early years of his pro career were a series of moves between starting and relieving, Chicago and Iowa, sliders and curves, cutters and sliders, circle-changes and splitters. Tagging Samardzija's pitches was never fun, up until 2012, when he really put things together.

And then came May 27, 2013, when the new Shark fooled me in a different way than the old Shark ever had. Look at this pitch movement chart, and you'll see some purple dots (splitters) over the bunch of red dots (sliders). It just so happens that some of those slider-esque splitters were third strikes. 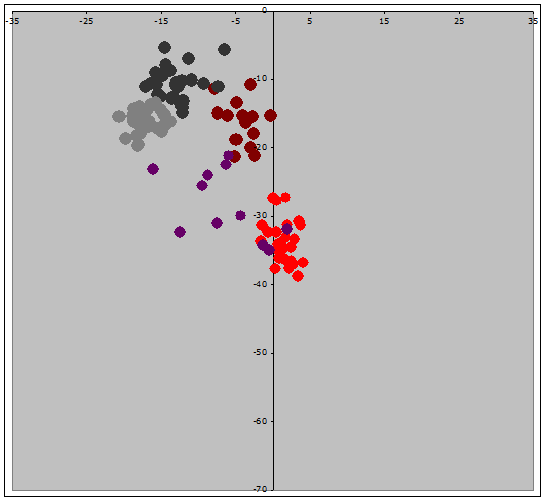 It looks wrong, but it isn't.

All of those red and purple pitches are about the same speed, in the low 80s. They constitute all of the “slow” pitches for Samardzija (everything else is 90-plus). Based on the movement, as measured by PITCHf/x (with drag removed and gravity added back in) some of those splitters scream "slider."

Well, they are splitters. How do we know? Video scouts. Namely the folks at BIS and Inside Edge.

Some of Samardzjia's bad splitters move exactly like sliders. You can tell from the grip, and you can see the 4 sign.

Before I saw Eric's tweet (he's a video scout for BIS), I sent a note to my friend Mark Simon at ESPN. I thought the reports of Samardzija's strikeouts all coming on splitters was wrong. A few of them just had to be sliders—I mean, look at the movement charts.

Mark's contacts and Inside Edge went back and checked the video. Two things happened: first and foremost they confirmed that the pitches in question were splitters by checking the catcher's sign and the grip and release. They also found that some of their other splitters were actually sliders. See, Shark fooled them, too.

To round things out, I asked our intern Dan Rozenson to review the video himself, and he immediately agreed with BIS and Inside Edge. All of the strikeouts came on splitters, even though a few of them really looked like sliders.

And so the story ended.

You can explore these tags in various views in the game log at Brooksbaseball.net.

Samardzija's split at times has arm side action, others it's slider-like. Said that if he doesn't know where it's going, batter has no clue