The Monday Takeaway
As the time ticked away toward Andy Pettitte’s return to the Yankees, they had plenty of options for which hitter they’d have to send down to make room. And it was as much a philosophical question as it was one of performance.

Remove Lyle Overbay and you’d probably lose him to waivers, but it was the position-prudent thing to do. Mark Teixeira was back, and how many first basemen do you need? Send down David Adams and at least you’re preserving a roster with four outfielders.

The Yankees did neither, though. Unwilling to part with an offense-only player like Overbay, they went all in on offense, sending Brennan Boesch to Triple-A Scranton. As a result, Overbay became an outfielder for the first time in his major-league career and the first time since he was a 24-year-old El Paso Diablo in 2001.

He hadn’t played right field since his professional debut in 1999 with the Missoula Osprey, but he didn’t embarrass himself Monday night. The most anxious moment came in the fifth inning when Yan Gomes lofted a bases-loaded fly ball to shallow right, but Overbay came in on it fine.

If there was a perfect time for the Yankees to try this, it was Monday night. They were facing a right-handed pitcher in Justin Masterson, and getting the extra lefty power in the lineup was ideal especially in Yankee Stadium. Also, the Stadium features a short right field and Brett Gardner, who is a 22.5 FRAA player in the equivalent of 3 ½ seasons, was right next door.

Having three outfielders will hurt the Yankees at some point, perhaps as soon as tonight when they face a lefty (Scott Kazmir) and it’s Vernon Wells, Ichiro Suzuki, and Gardner with no backups. Or maybe when they leave tiny Yankee Stadium and Overbay would have to navigate Safeco Field, The Coliseum, and Angel Stadium on the next trip.

Eventually, they’ll probably need to re-evaluate this. But a team that has really one strength—left-handed power—made a high-stakes play to that strength and lived to tell about it for a night.

Matchup of the Day
In perhaps his toughest challenge of what appears to be a breakout year, Matt Moore will try to continue his stunning run of success against right-handed hitters when he faces one of the game’s best in Miguel Cabrera. While Moore is a lefty, he’s yielded little to right-handed hitters, holding them to a BABIP-suppressed .153/.249/.287 slash line this year with 11.0 percent walks and 26.0 strikeouts. (Lefties are hitting .232/.329/.406 with 11.3 percent walks and a much lower 15.2 percent strikeouts.)

The reverse split isn’t really a fluke. While he didn’t carry one through a full season in the majors last year, a lot of that was BABIP, and his walk and strikeout numbers illustrated a reverse split. Moore is certainly susceptible to one without a slider in his repertoire to use on same-side hitters. He uses a changeup plenty against righties, as you would expect. This year, he has pumped up the use of his curveball from 15 percent of all pitches against righties to 22 percent.

He’s faced Cabrera before, and those three plate appearances were very different than Moore’s usual. For one thing, he was extremely careful, walking him twice and throwing this array of pitches mostly out of the strike zone before giving up in the last one and intentionally walking him after two fastballs that weren’t close. 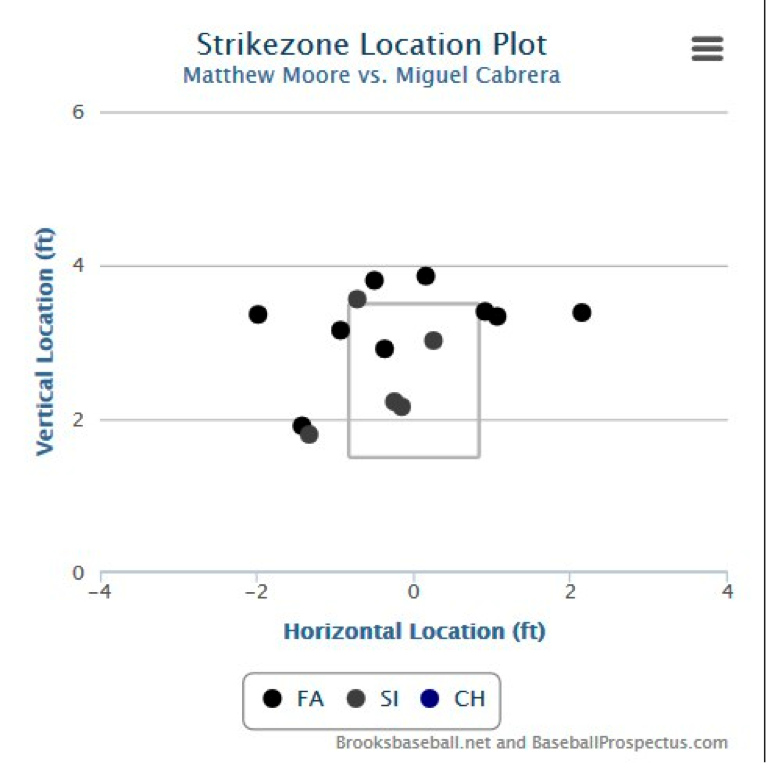 But Moore threw almost exclusively fastballs, whether four-seam or two-seam, and those accounted for 14 of the 15 pitches before the intentional walk.

Moore is due for some regression simply because humans cannot sustain a .206 BABIP, and facing Cabrera tonight will be a fascinating test for how soon that will come.