There’s really no foolproof way to tell who’s going to become a True Yankee©. It helps to be good, of course, but being good is no guarantee. And it helps not to be bad, but being bad doesn’t disqualify you. Worse players than Ben Francisco have become beloved Yankees, and there’s probably an alternate timeline in which Francisco gets a few timely hits, sticks around all season, wins a playoff game with a walk-off bunt, and spends his retirement rubbing shoulders and receiving standing ovations at Old-Timers’ Day with Luis Sojo and Homer Bush.

But this must be the darkest timeline, at least for Ben Francisco. Because in this timeline, none of those things has happened to him. Instead, these things have:

March 11: Francisco requests his release from the Indians and signs with the Yankees. “How hard can it to be to take Vernon Wells’ job?”, he probably thinks to himself. 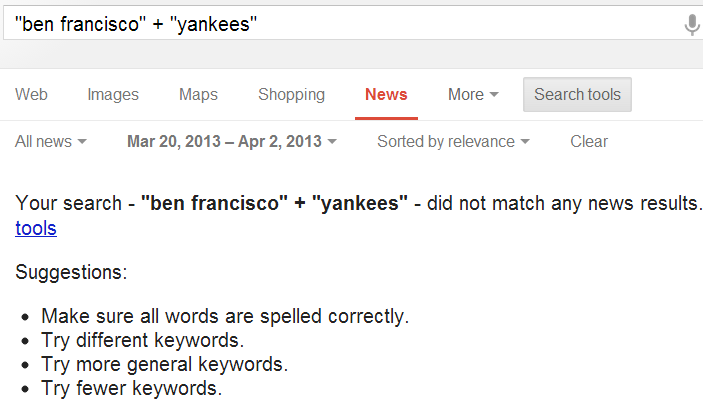 If you remove the quotation marks, and also remove the “Yankees,” you get one link to an mlb.com story about Lyle Overbay making the Yankees that also, as quietly and apologetically as possible, mentions a roster spot being set aside for Ben Francisco. There are quotes from Overbay, and there’s even a quote from Juan Rivera, the player who was released to make room for Overbay. There are no quotes from Ben Francisco, because who cares what he has to say.

Cashman on Ben Francisco's roster spot: "Just in terms of your fan comments section, just say I'm holding onto him to piss everybody off."

According to River Ave Blues, Cashman then went on to “acknowledge the team always looks for upgrades and will pounce if a better right-handed hitting outfielder becomes available.” You know, just in case the first quote made Francisco feel too comfortable.

By signing this petition, you are stating that you believe Ben Francisco is not good enough of a player to be a New York Yankee and should be designated for assignment immediately. The Yankee front office should be able to find a better right handed outfielder to come off the bench against left handed pitching. At the very least, there are better options in the minor league system.

Furthermore, a signature on this petition is a request made directly to Brian Cashman and the rest of the Yankee personnel evaluators to spare us fan from having to watch Francisco and his .114 batting average again this (and any other) season. Please cut him from the team post haste.

May 24: Joe Girardi, manager of the Yankees, literally forgets that Francisco is on the team:

Girardi mentioned having only three outfielders and being willing to use Jayson Nix in the outfield if necessary. Reminded of Francisco, Girardi reversed course. “Oh yeah, Francisco,” he said. “Four (outfielders). So disregard what I said. I don’t know what we’ll do. We have so many roster issues, I’m not sure what we’re going to do.”

Francisco was once a perfectly fine fourth outfielder. He's now the Jerry Gergich of the Yankees clubhouse.

May 17-25: Ben Francisco does not play baseball. This has happened before.

May 26: Cashman caves in to the pressure applied by those 10 people who signed the petition and designates Francisco for assignment to make room for David Huff, a 28-year-old lefty reliever with a career 5.41 ERA. There are only two outfielders who have been on a big-league roster since Opening Day and made fewer plate appearances than Francisco’s 50: the Cardinals’ Shane Robinson, and the Padres’ Mark Kotsay, who is more of a clubhouse spirit animal he is an actual player at this point.

Here are the highlights of Francisco's Yankees career, according to the people at mlb.com who determine these things.

Two of those highlights are highlighted only because they were the first time Francisco did something mundane while wearing a new uniform. One of them was just an okay catch, although Francisco was indeed running when he made it, as opposed to standing still. One was a pretty good catch and worthy of a highlights page. Another was a homer, although the homer was hit off an Astro who's allowed nine of those in 38 innings this season, so ehhh.

So long, Ben Francisco. Better luck with your next team, which will most likely be the Mets. After all, this is still your darkest timeline.

You need to be logged in to comment. Login or Subscribe
NYYanks826
At least we can now be spared the indignity of having to hear John Stering's HR call: "The Ben Francisco treat!"
Reply to NYYanks826
Ogremace
On the contrary, this is the only thing I'll miss about Mr. Francisco.
Reply to Ogremace
gweedoh565
This is so sad and yet so funny. A++
Reply to gweedoh565
pobothecat
A Jerry Gergich reference. Nice.
Reply to pobothecat