Let me put this right up front, because it's the eye-catching number: Bartolo Colon's percentage of batters walked through eight starts this season (i.e. through 47 1/3 innings pitched, i.e. through 189 batters faced, i.e. almost 30 percent of the way to the number of hitters he faced last year) is 1.1 percent.

I don't expect you to know how low that is because we're all still getting used to the idea of walk and strikeout rates being expressed as percentages of batters faced rather than raw totals or "per-nine" figures. For context, here are the walk percentage leaders for ERA qualifiers in 2013:1

I went down to six, which is a weird thing to do, but I wanted to say this: Bartolo Colon has walked so few batters this season that his rate is less than one-third the rate of the man with sixth-best walk rate in baseball.

Next bit of context is the all-time (back to 1916) single season list:

Bartolo Colon presently has the lowest walk rate for an ERA-title qualified pitcher ever. He has half the rate that Bob Tewksbury had in his best seasons. Bob Tewksbury!4

For the record, here's what happens if you look at all 21,357 pitcher-seasons in which said pitcher threw at least 40 innings (i.e. not that many at all):

Are you not impressed?

On April 23rd, in Colon's fourth start of the year, Jacoby Ellsbury stepped to the plate in the sixth inning with the Red Sox trailing 13 to zero. Here is the strike zone plot: 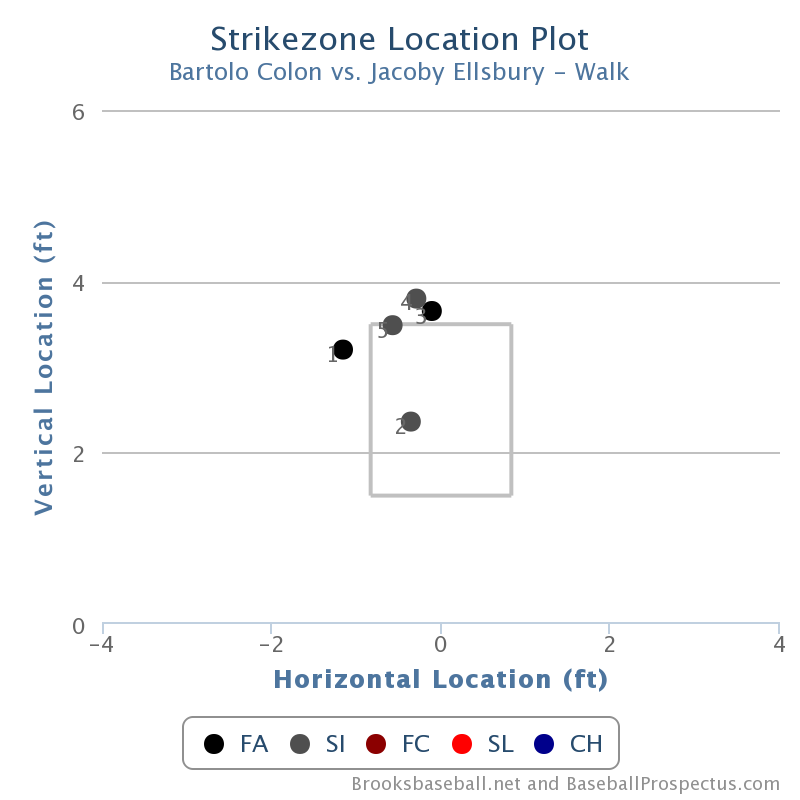 That isn't a great set of pitches, outside of the second one, which Ellsbury fouled off. None of the four balls was closer than one foot from the center of the strike zone.5 That's one way to look at it. Another way to look at it is that Bartolo Colon's average pitch this season (of the 667 recorded by PITCHf/x) has wound up 0.94 feet from the center of the zone, and ball four in the Ellsbury at-bat was 1.01 feet away and, furthermore, was, by the plot above, a strike. Specifically, the top of the strike zone set before that pitch was 3.64 feet above the ground, and the pitch crossed the plate 3.49 feet above.

Colon's other walk came just Tuesday, in the top of the first against Lance Berkman. Here's the plot: 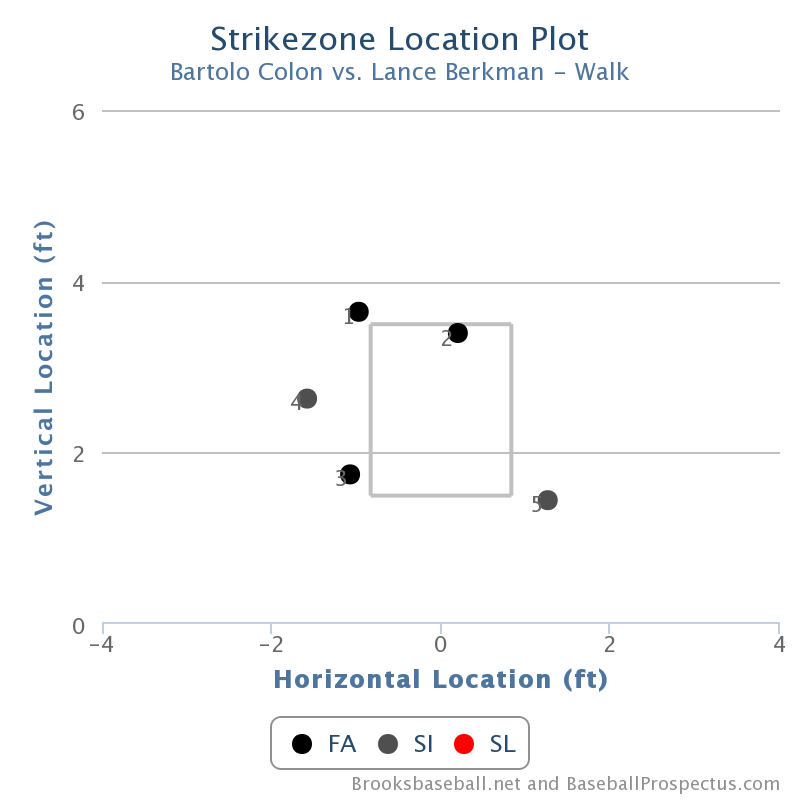 Same sequence, weirdly: ball one, foul for strike one, then three more balls for the walk. Here, though, the closest pitch was 1.28 feet from the center of the zone, and the at-bat was noticeably worse when watching in real time and looks noticeably worse on the page now.6

Like I said, Bartolo Colon has thrown 667 pitches recorded by PITCHf/x this year. Here are how the eight balls he threw in those two walks rank when you sort all his pitches by how far they were from the center of the zone: 65th, 70th, 78th, 127th, 138th, 155th, 218th, 276th. For some definition of "worst," just one Colon pitch in the two at-bats above was in the bottom 10 percent of all pitches he's thrown this season. You know what they say about timing: timing is a bitch.

You will not be surprised to learn that Colon also ranks first in the league in percentage of pitches thrown in the strike zone (60.4 percent; second place is Brandon McCarthy at 57.7 and the league average is 49 percent) and seventh in swing rate despite actually clocking in below average in the percentage of swings taken on pitches in the zone. The sheer number of fastballs7 that Colon pumps into the zone overwhelms everything else.

Now, Bartolo Colon, pitching in locations that, per our park factor numbers, have reduced run-scoring by about 6 percent and pitching in front of a defense that, by Park-Adjusted Defensive Efficiency, turns balls in play into outs about 1.4 percent better than average, has a 4.56 RA/9 in an American League that has scored 4.43 runs per game.

There are two ways to look at this:

A significant portion of the downside of Colon's approach, as you might guess, is the long-ball: if he faces the same number of hitters that he did in 2012, then at his rate (a homer every 27 batters) as against the league average (a homer every 35 batters), he'll wind up allowing five homers more than average, which is something like seven linear weights runs. That's most of the way to a win, and if Colon pitches a fuller season, then you're looking at getting all the way to a win.

On the other hand, when the ball stays in play, Colon is not getting knocked around: his BABIP of .281 is better than average. (It was .286 last year.) This might rate as somewhat unexpected.

We are in the realm of the dreaded wee sample, but we're also in the realm of the generally weird, so it's worth asking what Colon is teaching us. Should more pitchers with 91 mph stuff forget about trickery, forget about sequencing, forget about offspeed pitches and stuff that bends and just pound the ball into the strike zone pitch after pitch? In a sense, this is easier said than done, sure, but how much of the difficulty in pitching is due to trying to throw three or four pitches and keep it unpredictable and put the ball on different sides of the plate and how much is just that throwing a ball is hard?

I'm not suggesting that Clayton Kershaw abandon his curve or that Zach Wheeler bail on continuing his refinement of his advanced arsenal and approach—ace-level pitchers are ace-level pitchers because they bring the whole package of stuff, command, control, and approach. I'm asking about a player in Colon's situation, a 40-year-old former ace who used to throw in the high-90s and wants to hang around because baseball is fun. I'm asking about a journeyman who's 29 or 31 and whose kids are running perilously short on patience with dad being away for six months but not getting paid anywhere near enough to make it worth it. R.A. Dickey picked up the knuckleball, Chad Bradford threw underhand, countless lefties close off their deliveries and drop their release points to get tougher on same-handed batters. Could a pitcher in similar straits go full Colon and decide, like Dickey decided to throw a knuckler, to just throw strikes?

It's worth noting that Colon's sinker, the pitch he throws nearly 60 percent of the time, does move—he gets the 17th most sink of 93 pitchers this year who have thrown at least 100 sinkers, and he comes in 14th among 67 right-handers in horizontal movement as well. He's got something in his arm, in other words, that not every pitcher has, but it's not something unapproachable or unfathomable.

The problem that comes to mind for anyone who wants to learn at the feet of Colon is the dreaded hitter adjustment. It might be, though, that the game theory of the pitcher-hitter matchup runs up against the limits of human achievement and the sheer inability of baseball players to do any more than influence outcomes. If the pitcher throws more strikes, batters will swing more and so they'll put the ball in play more, but will the ball be put into play harder? How much harder? To the extent that an extreme focus on putting the ball in the strike zone results in more pitches right down Broadway, Dave Allen's pretty picture shows the negative results for the pitcher. But in Colon we're still talking about, as the most extreme strike-thrower in baseball, a pitcher who sees 40 percent of his tosses wind up outside the strike zone (despite, as near as anyone can tell, desiring never to throw a ball again). And we're still talking about a pitcher who

isn't putting pitches in the extreme BABIP zone more than 20 percent of the time. In fact, remember my list of Bartolo Colon's pitches this year sorted by how far they were from the center of the strike zone? Here were the 10 closest, with the results:

That doesn't look bad at all, especially considering that Colon threw the ball down the middle against some of the best and most powerful hitters in the league. You get to the 12th-worst pitch (by this simple question of whether it was down the middle or not) before you get trouble (a double by Yan Gomes) and Colon's homers allowed have come on pitches ranked as follows: 49th, 103rd, 122nd, 152nd, 165th, 232nd, and 345th closest to the center.

So the bear is eating Colon from time to time, as his seven homers allowed show,8 but Colon is eating the bear frequently enough to make him not just a semi-valid fill-in option but a legit back-of-the-rotation choice for a team that wants to contend. For $2 million, the A's could do worse, and for a 40-year-old who, frankly, does not appear to be in the best shape of his life, Colon could do worse. It may take a commitment to different aspects of a pitcher's mechanics than he would otherwise think about (less torque, say, and more repeatability), but if you're stuck at Triple-A and haven't figured out a way to get more out of your low-90's heat via traditional methods, Colonizing yourself might not be the worst reinvention option.

Now that Jeff Keppinger has finally drawn a walk, I'm glad I have a new weird/fun stat thing to keep an eye on.