Last summer, when Ron Washington was asked about Mike Trout, he anticipated the questioner's tendency to overreact to hot young things:

Now replace the name Mike Trout with Manny Machado, and replace the name Willie Mays with the name Mike Trout. No, Machado isn't the next Mike Trout. He's a pretty good player. He does things that make you wonder how soon he's going to be a great player, and whether he might be already. He's just a month older than Trout was last year, just six months older than Bryce Harper is, and, over the past week, he has done something tremendous every single game. That's not hyperbole. I watched every play he was involved in at the plate, at his position, or on the bases, and he did everything you would hope to see. And I hoped. Here's my checklist of stuff I wanted to see Manny Machado do in one week, and darned if he didn't get to just about every single one of them.

And so here we go.

On April 30th, Ben and I mused about why there wasn't more hype around Manny Machado, who was something like 10th in baseball in the various total-value metrics but wasn't getting quite the attention that 20-year-old phenoms usually get. I theorized that it was that he wasn't a fantasy phenom, with just two homers and two steals. He homered the next day, and then he homered two days later, and then he homered the day after that. This was the second of those three, and it came against Tommy Hanson, who hung a slider. That seems like a simple enough thing to do, homering off a hanging slider. But Hanson had actually fallen behind 2-0 on Machado, who was seeing him for the first time and who, therefore, had never seen Hanson's slider. Destroying a 2-0 slider against a pitcher who you've never seen isn't not notable. Hanger or not, I bet Hanson was shocked that Machado swung at this one.

That's the 51st-fastest home run that anybody has hit this year. You saw the first one Machado hit land in the Angels' bullpen. This one landed in the visiting bullpen, which doesn't happen much. It was caught in a hat.

In six games, he didn't double. He's still third in baseball in doubles this year.

Go the other way

"Once this young man figures out what kind of hitter he's going to be, he'll be very powerful," says Rex Hudler after this single. "He'll be taking that pitch out of the yard."  Eh. Maybe. He reminds me of Miguel Cabrera as much as anybody, and Cabrera goes to right field plenty. And a few hits like this will keep defenses from shifting against him; you can see from the infield alignment above that they want to cheat. This was more hard contact the other way, but an out:

Adjust and beat a pitcher

The Orioles announcers, talking about Machado during the Angels series:

Jim Hunter: What do you think that scouting report for the Royals is gonna be?
Mike Bordick: It’s kind of like Clemente: Throw him a breaking ball, just don’t do it twice. Don’t ever want to hang it. Come in, but don’t go back. Down and away, we might try that but that could be a triple in the corner. Meanwhile, you’re starting to perspire and you’re not gonna start for two hours. We’ve seen it all year long, you make a good pitch and come back with one that’s not as good he seems to be on it.

Two good examples of this against the Royals. Ervin Santana threw him an 0-1 slider in the dirt, Machado didn't identify it, and he swung wildly at it, shaking his head afterward. After a fastball to set up another slider, Santana threw a good one down in the zone, or down out of it. He got Machado to chase, but the hands stayed back and he put a much more compact swing on it:

The next day, Luis Mendoza got ahead with three sinkers low and in, two of which Machado swung at and fouled off. He went to the pitch a fourth time, same location, and this time Machado was on it—even though Mendoza executed his pitch and got Machado to go out of the zone.

I mean, that seems convincing.

Every throw he makes is beautiful; quick release, generally perfect aim, and fast. But this play probably translates best to the medium:

Alternative angle to appreciate how necessary his arm was in converting this out:

Outplay somebody better than he is

More from that piece about Mike Trout that I linked to in the first sentence of this piece:

In Saturday's game, at third base, Eric Chavez sets up at the lip of the grass, guarding against the bunt. Chavez's positioning makes it less likely that Trout will try; on the other hand, it makes it more likely that Chavez will need reconstructive dental work. As the pitch comes in, Chavez sometimes breaks backward, the drawn-in setup just a decoy. This is a plan. Trout ruins the plan when he gets jammed and chops one softly toward Chavez. From his deeper position, the third baseman has no chance, and Trout flies into first for a hit.

Trout hits that soft chopper to Machado, too. He reaches first in 3.97 seconds, but Machado gets him:

It's not easy to do something heads-up every six days, and I probably wouldn't notice it if he did, so the bar for this is set pretty low. Still, I know that if I were the third baseman on this play

that I would have gotten as far as motioning for the left fielder to throw to third base; I would have then stood there and watched the play; I wouldn't have remembered immediately to go back up the throw. Baseball is deceptively fast, and Machado was where he was supposed to be, so that's cool stuff.

Be praised with ridiculous fun facts and absurd hyperbole Lots of first basemen talk to lots of baserunners after a single. Some of us find the custom weird considering the players' adversarial relationship. Whatever. It's tradition. But after Machado gets a single, Eric Hosmer literally pats him on the butt. Watch the glove.

He pats his opponent on the butt. "Good job we were all pulling for you!" What a freaking charmer Machado must be.

The thing I like more than anything in baseball is watching baseball men do unnecessary tiny hops. The tinier the better.

No need for that tiny, tiny hop. No need at all. Precious.

Because he's got a .348 BABIP, and I don't want to think he's just getting lucky, so it's important to see him getting unlucky:

That scorcher was so hot it was literally smoking!

Or shook a cloud of dust free from Mike Moustakas' glove, but either way.

This is an error that Machado made:

It's spectacular. It had been raining that day, so the infield was slick. Did he have to field it barehanded? I never know, but 1) it seems possible that the ball skipped/spun faster than he was intending, and he might have 1a) had to or 1b) planned to grab it barehanded when he was expecting an easier hop than he got and 2) he did it! He totally did it. And then he threw low, and on the alternate angle (not seen here) you can see that it probably skidded under Chris Davis' glove because of the wet ground, and shoot for all we know he threw it wildly in the first place because the ball picked up some moisture off the wet grass. The point is that this is an error that contains a lot of wow, and but for some unfortunate circumstances and a rather ungenerous scorer's decision (not just error on the runners advancing, but on Gordon reaching first base in the first place) we would have a highlight instead of a blooper here. 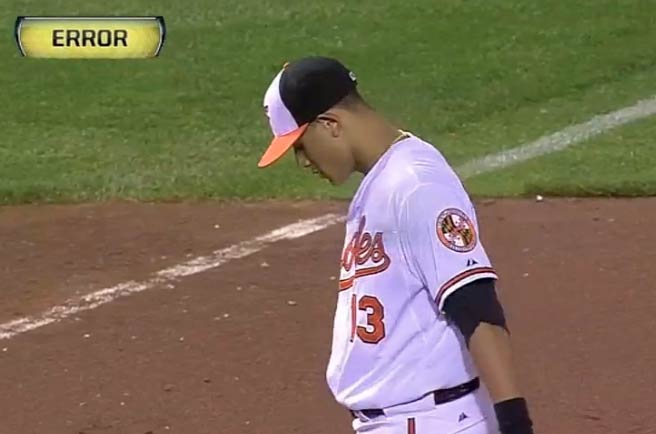 While this error was hardly damning, there were other moments when Machado was slightly imperfect. He badly blew a run-down play; everybody knows, except Machado, that you follow your throw. There was a pop-up that landed on the dugout roof that Machado didn't even chase; the dugout roof is pretty close to catchable! There were a few balls in the dirt he swung at; there was a stolen base that would have been a caught stealing but for a wild throw; when Hank Conger bunted against the shift and tripped on his way to first base, he was safe partly because Machado gave up on the play. If there's anything to knock Machado on, it's that he's a bit too casual, a bit cool for school. But in six days of close examination, there will be errors, and there were.

There's no point trying to decide right now how good he is, or will be. He's really good. He'll probably be better. There's probably, oh, a one in three chance? one in four? that he makes the Hall of Fame. But that would mean a two in three chance, or three in four, that he doesn't. I have no interest in getting more specific than saying his baseballing is pretty, and I'm attracted to it. He's a pretty good player. Let that kid play.

I've always appreciated the the "defective mitt inspection" myself. Players never seem to understand how something you lovingly caress and slather various oil onto could do you wrong in a key moment.

Great stuff.....................and he does appear to be the real deal.
Reply to mutemike
TGisriel
As a long time Orioles fan, a silly exercise I engage in is listing the best Orioles career at each position. For many positions it's easy: Brooks at 3B, Cal at SS, Frank at RF.

I told a friend that we may be watching two Orioles now who will have the best career at their position: Jones in CF and Wieters at C.

My friend said, what about Machado?. I thought: better than Brooks?, if he moves, better than Cal? At first I thought that was rediculous.

On reconsideration, I won't rule it out.

This is a career I am looking forward to watching.
Reply to TGisriel
RickerSays
As another fellow O's fan - I couldn't agree more. This is going to be fun. Cheers!
Reply to RickerSays
zellenthal
"A Week Watching __________ " might be a fun recurring series.
Reply to zellenthal
bensonq
Awesome piece, agree, would be great feature.
Reply to bensonq
chabels
To supplement the existing "a week's worth of sadness watching Albert Pujols "run.""
Reply to chabels
RickerSays
Really great job here... and not just because I'm an O's and Machado fan. Good, spirited fun. The pebble face was just hilarious.
Reply to RickerSays
hannibal76
This is top shelf Baseball Prospectus stuff here. We Orioles fans have a lot to be excited about and Machado is definitely one of them. But I think this piece makes it clear that not just Orioles fans but all baseball fans should be excited about Manny Machado. Nonetheless, let's go O's!
Reply to hannibal76
warpigs
This article was tremendous. Probably too long for me to read on a Friday so I'm glad I came back to BP on Saturday morning. Awesome stuff!
Reply to warpigs
BloodStripes
Top stuff Sam. Manny is certainly a joy to watch. As you have pointed out. He does it all.

The Orioles believed in him and he has delivered. Rising to every challenge.
Reply to BloodStripes