On Saturday, Scott Kazmir and the Indians faced Joe Mauer and the Twins. Kazmir was looking for his first victory since 2010, and he got it. Mauer was looking to break out of a 4-for-38 stretch that had dropped his OBP nearly 100 points. He reached base twice, but only once against Kazmir, and with weak contact.

Previous history:
For three seasons, Scott Kazmir and Joe Mauer shared space at the top of prospect lists. From 2003 to 2005, Kazmir ranked 11th, 12th, and seventh on Baseball America’s lists, while Mauer was fourth, first, and first. Each player debuted in 2004; each started the 2005 season on a major-league roster, and each had a strong rookie season—though Kazmir (3.7 WARP) finished just ninth in Rookie of the Year voting, behind Jesse Crain, while Mauer (3.0 WARP) received no votes, behind Jesse Crain. They faced off in three games through 2008, with each player demonstrating some of his signature skill: Mauer banged out three line drive singles in 10 trips to the plate, while Kazmir struck out Mauer, one of baseball’s toughest tasks, three times.

The last time they faced each other was in 2008, when Kazmir was an All-Star but showing the first hints of a dip in his effectiveness. That day, the first 10 pitches he threw to Mauer were fastballs, all but one of them 91 or 92 mph.

Since that matchup in 2008, Mauer has hit .327/.408/.474, won an MVP award, and produced 18.6 WARP. In the same time period, Kazmir produced 1.0 WARP in the big leagues. In all action, split between the majors, Triple-A, the Dominican Winter League, and the independent leagues, he pitched 392 innings with a 6.04 ERA. “He couldn't even find it whether it was pitching in extended spring training against kids or teenagers,” former manager Mike Scioscia said in 2011.

The last time we saw Kazmir in the majors, in 2011, his average fastball was 86 mph. The first pitch he throws to Mauer is 90.

It’s also a two-seamer, a pitch Kazmir introduced in 2009 and largely scrapped by 2010. There was some evidence that it was an effective pitch in 2009, getting twice as many grounders as his four-seamer and inducing half the slugging percentage. (If our classifications are accurate, at least. That’s not necessarily a given, as Kazmir also claims to have a “third” fastball that you won’t see on his PITCHf/x cards.)

The second and third pitches, though, are the real eye-openers, each registering at 94 at BrooksBaseball:

If someone has an above-average fastball, or above-average off-speed, the margin for error is a little bigger, but at the same time, these are big-league hitters. They hit mistakes and they get advance scouting that is so high-tech… they’ll be able to hit those things. All I’m saying is that when you have good stuff, you have a lot more margin of error.

He is a more flawed pitcher than in the past because of the decline in raw stuff. Kazmir was never known for his precision, and it's evident that he will not be known for it now. He locates fastballs to arm-side targets well enough. It's when Carlos Santana asks him to go glove-side that things get greasy. Kazmir has struggled with finishing his pitches, and as a result he's missed with a few too many fastballs up and to the arm-side to feel comfortable.

Kazmir doesn’t hit his location in any of these three pitches, and he probably misses in the direction he’d rather he didn’t. Mauer doesn’t know that, though. Mauer just knows he got busted inside with a couple of 94 mph, arm-side fastballs. (Kazmir would hit 95 with a pitch later in the game.)

Before the fastball deserted him, it was the slider that was a problem in Anaheim. His arm slot started dropping in 2008—he blames some elbow soreness—and the slider flattened out. He quit throwing it as much, dropping to 14 percent in 2010. It’s back to 20 percent this year. His arm slot, too, is back to where it was during the pretty-good years:

These are the four to Mauer:

Here’s Kazmir talking about the slider, to Laurila:

DL: Do throw your slider differently to right-handed and left-handed hitters?

SK: Oh yeah, but I think it all depends on how you’re pitching a guy. If you’re pounding the fastball in, a back-foot slider is going to be good. But if you have a lefty… a lefty has a little bit different approach. Most of them don’t really stay in there as good, because it’s coming from a lefty—it’s lefty on lefty—and they see the ball and it looks like it’s almost coming out from their shoulder. It’s a whole different approach, so you do have to throw a different slider. For me, it’s more of a catching-more-of-the-plate, straight-down kind of action. With the left-handers who are stepping out, almost in the bucket, as you would say—kind of bailing a little bit—the slider you throw to righties, they’re not going to swing at that, because it looks like it is way off the plate. To righties it’s going to look good, because it’s right in there for them. So you do have to have a different slider.

Kazmir's struggles to locate extend to his secondary stuff, which exacerbates his inability to end at-bats in a timely fashion. In order to get big-league hitters to bite, Kazmir needs to throw the ball around their two-strike mouths—typically in or around the bottom portion of the zone. He could not do that against the Royals, and it plagued him to the point where he broke out a seldom-used curveball to steal strikes. In fact, the seven curveballs he threw this season—all in the low 70s—were the first PITCHf/x ever registered for him. You'd be tempted to call it a classification error, but Kazmir confirmed the existence of the pitch to a reporter in spring training. The curveball went back to the closet against the Twins, as Kazmir generally located his slider better and took advantage of a worse lineup. Two of the sliders to Mauer in this at-bat were located well, though two missed badly up and/or over the plate.

Mauer ultimately flipped a weak pop-up to left field that dropped in for a single.

The first-pitch fastball up is the fourth-hardest pitch Kazmir will throw all game. The slider looks like more of the no-dot slider Kazmir says he'll throw to right-handers, starting in almost the same spot as the fastball before breaking late. It works more on deception, so-called late movement, rather than with a ton of tilt. Here's the step-by-step progression of the slider on the left, fastball on the right: 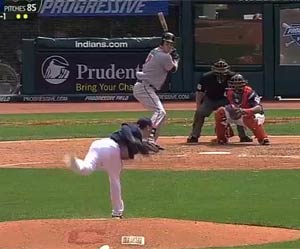 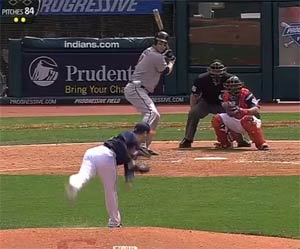 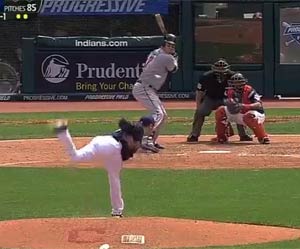 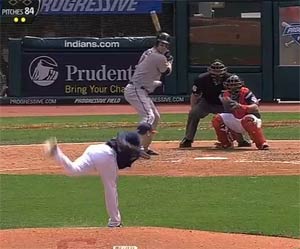 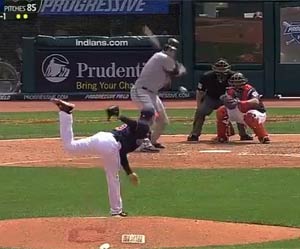 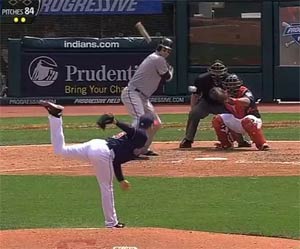 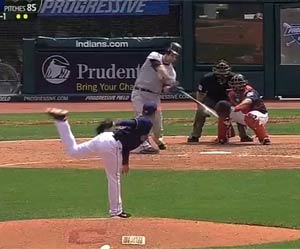 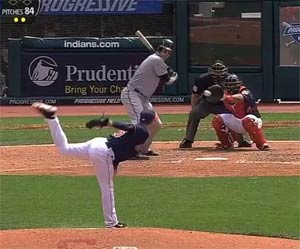 You can see why pairing it with a well-located fastball would be effective in getting hitters to chase over it, though here Kazmir doesn't get it quite to a place that would qualify as a chase. Kazmir gets the groundout to second base. But it's on a slider that looks more like a get-it-over pitch than a putaway pitch. It won't make you forget about the excitement you felt the first time you saw him break one off.

In the two starts since his lousy debut against Houston, Kazmir has pitched better. Those loyalists who spent past summer nights tuned into some poor Tampa Bay teams will recognize traces of the old "Kid K" in this present-day Kazmir. The delivery looks more or less the same. So does his appearance; he still probably can't grow a worthwhile beard. Remnants of the old arsenal are here, too, as is the maddening tendency to rack up high pitch counts:

Call it stubbornness or resolve, but Kazmir had every reason to change his game—his repertoire, mechanics, philosophy, whatever—and mostly chose against it. He's not totally the same: the two-seamer is back; he undid a change in his windup that had him, for a while, raising his arms over his head; and, of course, the curveball seems to be a brand new offering. But Kazmir mostly made it back to the majors by embracing his power pitcher roots. He rides his fastball and, thanks to the recovery of a few miles per hour, thatt's a more credible strategy, especially for a southpaw. About 66 percent of his pitches this season have been fastballs, according to Brooks Baseball. The pitch has missed bats at a solid rate. Kazmir's slider features enough two-plane movement to dodge lumber as well:

And the end result is a pitcher who, name aside and based solely on stuff, has decent prospects of sticking around as a back-of-the-rotation guy. It's also not hard to imagine him pitching well into his 30s as a Oliver Perez-style conversion prospect. Both roles would require him to stay healthy. Kazmir's name was never synonymous with durability, and it doesn't help that he threw about 80 combined innings over the past two seasons.

Kazmir's hard work in overcoming long odds and injury is laudable. You figure he had enough money to retire comfortably and live—or continue to live—a lavish lifestyle. He put in the effort to get back to the show. Based on his stuff alone, his upside feels like that of a no. 4 starter. If Kazmir takes a dogged approach to improving and refining his craft further, it's possible that he'll exceed those expectations. Bottom line: he's not likely to be the guy who was getting Cy Young votes and finishing at the top of prospect lists, but that's a straw man; nobody's suggesting he is. It's petty not to acknowledge that what he has done in coming back is pretty exciting, much more exciting than anything he's likely to do going forward.

As for Mauer: From our angle, watching the catcher's mitt, it looks like he missed plenty of hittable pitches, sliders that stayed over the plate and fastballs that leaked back. Hitting is a lot easier from our angle, of course. "I don't feel terrible at the plate," he said after the game. "I just don't feel like I did in those four-hit games." Of course, for Mauer it's just one stretch, likely an illusion. The next time these two face each other, few will remember these at-bats. Most will continue to bet on Mauer.