But if you lower the plate appearance threshold to something too low to be significant, then you get to include everybody, including pitchers. Your BABIP if you played baseball would likely be null,

Why hello there Ross Detwiler 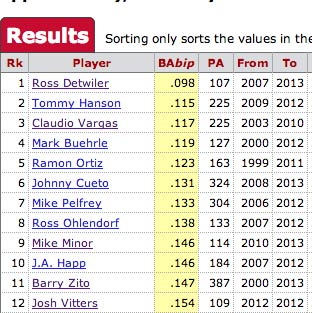 The terms of that search are >100 plate appearances among active players. Detwiler’s BABIP isn’t the lowest in history—retired Ron Herbel reached on 7.4 percent of balls in play on his way to a .029/.065/.039 career line—but it’s the lowest among active players, even when the word “active” is used liberally to include Claudio Vargas. (Vargas pitched in Mexico last year and is back now in the minors, where he has a .254 career BABIP in about as many plate appearances as he had in the majors.) (Note, also: Josh Vitters!) Detwiler went 0-for-1 Sunday, but he struck out, so his BABIP held steady. Let’s talk about that BABIP.

Detwiler goes with a pitch away and punches a sharp grounder into the hole. It's his first major-league hit. Here's his first-major-league-hit face: 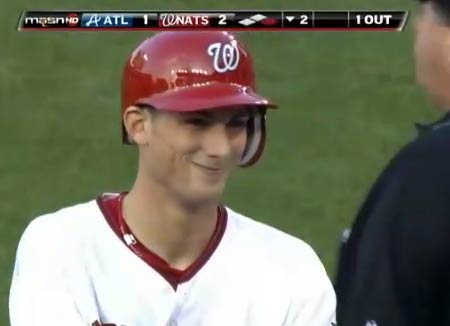 Here we learn that Detwiler has a reasonably firm swing, which is to say that he's not bailing out on pitches. "No matter who they are or where they play," Jon Miller once wrote, "baseball players fall into two categories: Those who have been hit in the head, and those who fear they will someday." Detwiler presumably fears this as much as anybody but, unlike many pitchers, he can convince you he's comfortable in the box.

Detwiler goes with a pitch away and punches a blooper to right field. Here we learn a basic principle of why baseball is not the perfectly calibrated game that romantics like to say it is: Detwiler gets a hit specifically because he didn't hit it hard enough. If he had hit it better than he hit it, the right fielder would have caught it. But because he's not very good, and he didn't hit it very well, it's a base hit. And this is about the third-most-common type of base hit. The sport is lousy with hits like these. There's no shame in this hit, and there's no shame in baseball for it, but a perfectly calibrated sport wouldn't reward so arbitrarily. An arbitrary sport would. Baseball's the best. That's Ross Detwiler's second hit.

Detwiler inside-outs a pitch inside past the second baseman. Here we learn, based on the pattern that is emerging, that Detwiler has a plan! When it's outside, he goes to right field with it. When it's inside, he inside-outs it. Considering that he's a pitcher and expectations for him at the plate are low, no plan is necessary, but Detwiler has one anyway. It's not like he's not trying, is what I mean.

Detwiler goes with a pitch away and punches a hard line drive to right field, then beats the throw from right field. Here we learn that all of his hits look basically the same so far. And, really, I'm about to show you my favorite part of this whole thing. It's his spray chart, over his career. It's so beautiful that I don't want to just dump it on you without comment, but I also don't want to use the wrong words to describe it, so I'm just stalling for space. Okay,

You can imagine a manager shifting his defenders in response to this spray chart, except who cares. It's Ross Detwiler. He's going to get a hit every 10 times he puts the ball in play. Not really worth trying to get that down to one hit every 12, is it.

Here we learn that Detwiler can move, for a pitcher. I got him at about 4.5 seconds down the line, which would roughly translate to a 30 run tool for a position player but which I would estimate blows most pitchers away. We also learn that, even when a player's BABIP is under .100, there is a lot of BABIP luck involved in getting it that high. There are undoubtedly balls that he has hit hard that turned into outs. But all five of his hits have at least some element of good luck, too:

The first one hit off the glove of the second baseman, who overdove for it.

The second simply wasn't hit hard enough to be caught. The third was maybe two feet from being within the second baseman's diving reach. He might have been thrown out on the fourth, except the ball carried just enough to make Jason Heyward field its hop a bit off balance. If Howard had been playing three feet deeper, he might come up with a quicker, stronger throw to get him at first. And the fifth was the luckiest thing that can happen to a batter.

It might seem weird to say that a .098 BABIP is lucky, but it actually makes sense that the lower the BABIP goes, the more luck is involved with it. Detwiler (like most pitchers) will never be better at hitting than the pitcher he's facing is at pitching. Every hit is going to be the result of some happy circumstance: an eyes-closed swing that connects, most likely, or a grievous mistake on the pitcher's part. Or a bleeder that rolls through. That's nothing against Detwiler, or against any pitcher; it's actually a compliment to their craft to say that no pitcher should get hits, and the hits that pitchers do get are an insult to us all.

Earlier this spring, Davey Johnson reportedly referred to Detwiler as "horrible" at the plate, and Detwiler probably is. But there's also enough to admire here. He steps into his swing. He has a fairly clean, compact stroke, and he seems to have his eyes open and a plan in place. He can run like an athlete should. He doesn't hack too badly, and his contact rate is bad but only about the 50th worst among pitchers last year. His 2012 rates, along with the non-pitcher most similar to him:

So he's got five hits, and he's been a little lucky to get them. He's also got only five hits, and he's probably better than that—he's probably been unlucky, too. Can those two things be simultaneously true? On different scales, yes. If you win Powerball, you were lucky; if somehow 1,400 other people won with the same numbers and split your pot, that's unlucky, right? Detwiler has no business getting hits, except that he plays a sport that all but insists everybody get hits, and within that weird logic Detwiler hasn't gotten his fair share. Small-sample BABIP quirks happen to hitting pitchers, too. It's smart that I'm writing this piece now, because my guess is that in a couple years he won't be at the top/bottom of this list anymore. He'll be fourth or something. And nobody cares about fourth.

You need to be logged in to comment. Login or Subscribe
leites
This is great, thanks for doing it.
Reply to leites
NathanAderhold
That spray chart is wonderful. Definitely calls for a follow-up post if he ever manages to turn on a pitch and pull it into the outfield, no matter the result.
Reply to NathanAderhold
dee150586
Awesome. Thanks for another great piece Sam!
Reply to dee150586
LlarryA
Where have you gone, Mark Redman, a nation turns its laughing eyes to you, woo woo woo...
Reply to LlarryA
rkowna
Great article. I am still staring at the spray chart. Thanks
Reply to rkowna
Schere
I guess there are a lot of bunts on that spray chart. Until I thought of that, I was ready to take Davey at his word.
Reply to Schere
bhalpern
Sorry, sacs already excluded because BABIP uses AB not PA. He must have a shitload of weak contact. But on the bright side he does have weak contact to all fields.
Reply to bhalpern
ncsaint
"it actually makes sense that the lower the BABIP goes, the more luck is involved with it."

That sounds half right. We should presumably expect low BABIP players to have what BABIP they do have fueled by a higher percentage of lucky hits. But for that reason, you would expect higher variance in the BABIPS of unBABIPy hitters. So you would think that the *very* lowest BABIPs would be from terrible BABIPers who had also gotten very unlucky. If it's true that he really has been luckier than one should expect (one can figure this out these days with Hit F/X data, right?) and still has a worse BABIP than every other pitcher out there, that's pretty special.

If he's been lucky, then maybe the numbers *understate* how rare his talent for making bad contact with the ball really is. Or maybe 100 PA isn't very much. But one of those.
Reply to ncsaint
bhalpern
100 PA is not enough to prove you're very good, but it would seem to be plenty to prove you're very bad.
Reply to bhalpern