The Rockies this season have already had three games postponed due to snowy weather. They've played a split doubleheader where the game time temperature was 23 degrees—for the afternoon game! More than once already, the club has had their employees—including mascot Dinger!—out on the field for hours, trying to shovel all the snow away so that a game could be played without digging out any cross-country skies.

It's been exactly the kind of winter that Denver mayor Federico Pena was always afraid of.

On October 15, 1984, the Denver Broncos hosted the Green Bay Packers in a Monday Night Football game. The weather in the first half looked like this: 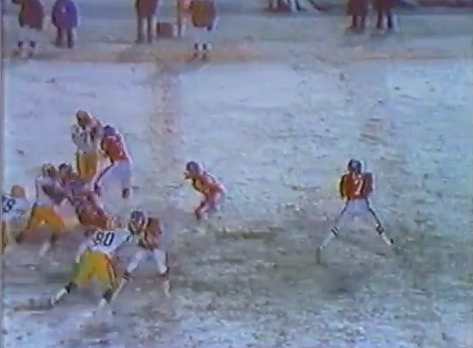 This was more than two weeks before Halloween. Less than a month removed from a summer day. For a triple-A city with big league aspirations, this was not the best advertisement for a future baseball club.

"It was distressing…a very unfortunate set of circumstances," the mayor told the Rocky Mountain News on Tuesday. "A lot of people in this city had worked very, very hard to make sure that the national audience was left with a good impression of Denver."

Oh yes, a time when the national exposure of Monday Night Football was special enough that it was treated as an advertisement for the city. But how exactly does a city make sure it looks good during a football game?

The AP article continued on about Denver's troubles attracting the interests of Major League Baseball.

The city already is battling an image that it is snowbound half the year, the mayor said, and the timing of Monday's relatively early-in-the-season storm didn't help.
…
Weather conditions were described variously by Frank Gifford as "miserable," "treacherous" and "weird."

"No, folks, this is not Sarajevo," Gifford cracked after returning from a commercial break midway through the game.

It's safe to assume that Gifford was making a joke about the 1984 Winter Olympics host city. A similar joke in 1994 might mean something very different, however.

Roger A. Smith, president of the Denver and Colorado Convention and Visitors Bureau, said the bureau will combat Denver's "snow-city" image through highlighting the city's high number of sunny, warm days.

The brilliant plan to circumvent decades worth of perception? Listing the day's temperature above the date on any letters sent out by the Visitor's Bureau.

"Except this morning; we probably wouldn't have put anything," he said.

The Rockies were awarded to the city of Denver in 1993. And, yes, since then there have been a rain-outs and snow-outs. But a winter like the one we are currently experiencing is very rare (and likely to affect other cities as well *cough*Minnesota*cough*) and shouldn't be cited as an example of "typical Denver". Overall, Denver has been a welcome addition to Major League Baseball.

And, besides, aren't we all better that something as beautiful as this was allowed to be built? 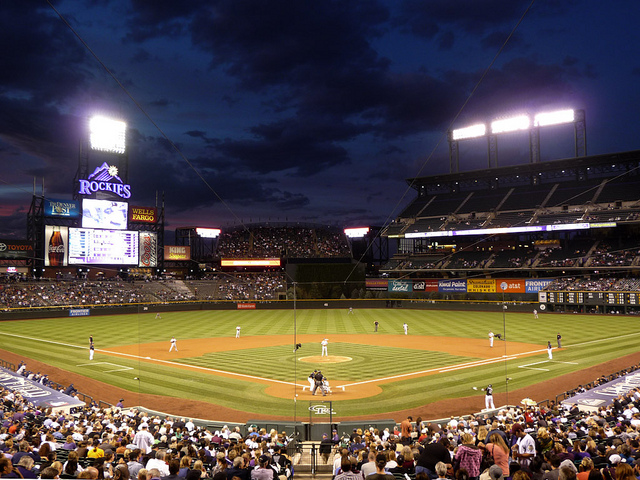 You need to be logged in to comment. Login or Subscribe
Mark68
"Typical Denver" weather...no such animal exists. Yes, there have been three games snowed out and one very chilly doubleheader. However, when the Rockies have been on the road, the weather has been quite nice. It was 80 on Sunday, although more snow is expected tonight and Wednesday. I've seen it in the 70s in mid-winter, but I've also seen it snow every month but June, July, and August. If there's anything typical about Denver weather, it is that it's atypical.
Reply to Mark68