Jose Valverde recorded a save against the Royals last October 1st, in his final regular-season game of 2012. He also recorded a save against the Royals yesterday, in his first regular-season game of 2013. Between those two games, Valverde lost his job as closer, spent six months looking for work, and finally re-signed with the same team, which supposedly had no interest in bringing him back. Because the trip was so circuitous, it’s worth recounting how he got from point A to point B, even though the two points look so similar.

During the winter, when we’re starved for baseball and wondering where free agents will end up, we treat each new report and rumor as if it might mean something. Where there’s smoke, there’s sometimes a signing. Of course, most rumors don’t lead to confirmed reports. They’re based on bad information, or good information that goes stale. They get published, tweeted, and blogged about briefly before being replaced by the next rumor, which usually has just as short a shelf life. It's hard to ignore the mostly non-news in the moment, but when the offseason is over and we know where all the free agents fell, it’s fun (and often illustrative) to sift through the conflicting reports and rumors and wonder where they came from. So that’s what we have here: an annotated timeline of how Jose Valverde wound up at the back of the same bullpen.

September 26
Valverde prepares to cash in as an established closer on the open market by hiring Scott Boras as his agent. Boras starts salivating about the commission he’ll receive on a new contract for a successful stopper on a playoff team.

September 27
Boras wastes no time in firing up the publicity machine. In making a case for why his new client can continue to be successful, Boras says, “Closers are good in their mid-30s, not in their mid-20s.” Like a lot of the bombastic Boras’ statements, this one seems like a stretch, but it’s ambiguous enough that it’s difficult to call it conclusively false. Boras is a salesman, so he’s not above a certain amount of spin, but outright lies are bad for business. There’s probably some stat that supports this pronouncement buried deep in a Boras binder, but it's tough to tell what it is. Really, it’s pretty hard to prove that players in their mid-30s are better at anything as a group than players 10 years younger.

If Boras’ contention were true, it would be because it takes time for potential closers to prove that they’re reliable enough to assume the role, and because bad closers have lost their jobs by the time they reach their mid-30s, leaving only the best closers still saving games. The evidence is flimsy, even so. Here’s the percentage of total saves recorded by pitchers of each age group over the last 25 years, which also happens to be the period since Dennis Eckersley became a closer and created copycats: 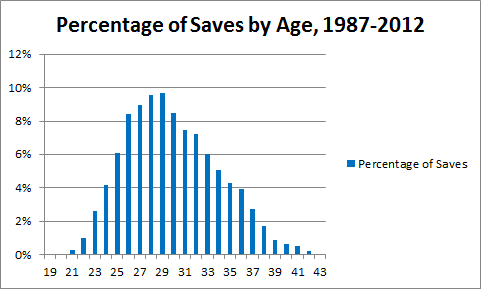 The highest percentage of saves was recorded by pitchers in their late 20s. Totals for pitchers in their mid-20s and mid-30s were roughly the same. Among retired pitchers who recorded at least 100 saves in that 25-year stretch, the average peak season, as judged by WARP, came at age 28. (In some cases, those seasons may have come before those pitchers became closers, since WARP isn’t influenced by leverage.) Maybe Boras meant that closers in their mid-30s are more effective, on an inning-per-inning basis, than closers in their mid-20s, which could be true, given that the remaining members of the former group are the strongest survivors of the latter one. Whatever he meant, the way the rest of the winter played out suggests that no one found his spiel in support of old closers particularly persuasive.

October 1
Valverde ends the season with four straight scoreless (but strikeout-free) outings. He posts career-lows in seasonal strikeout rate and fastball velocity, with the latter down almost two miles per hour from 2010.

October 17
After blowing both Game Four of the ALDS and the opener of the ALCS, Valverde is removed from the closer role. Jim Leyland acknowledges that he prefers a defined closer because it “takes a lot of pressure off the manager” by rendering him less susceptible to second-guessing. Valverde pitches one more time in Game One of the World Series, with the Tigers up by five runs, and gives two back before he’s replaced by Joaquin Benoit. The day after Detroit is swept, Valverde says he’d like to return to Detroit.

October 30
Tigers GM Dave Dombrowski says he won’t bring back Valverde. I once wrote an article about why you shouldn’t believe anything general managers say, citing several instances in which a team’s eventual actions contradicted its GM’s words. Dombrowski’s words this winter would give me plenty more material if I ever decided to do a sequel.

This is sort of a theme with Valverde, who claimed before his outing yesterday that both the Yankees and Mets offered him major-league contracts over the offseason. Brian Cashman quickly denied doing so, and Buster Olney cited an “NL source” who said the Mets didn’t do so either. The conflicting reports about Valverde didn’t die with the winter. They’re still surfacing, even after he signed.

April 4
The Tigers sign Valverde to a minor-league contract. Dombrowski says, “Scott has talked extensively to me through the last couple months.” In other words, when Leyland said signing Valverde hadn’t been discussed, it was definitely being discussed.

April 23
Lingering elbow discomfort sends Octavio Dotel to the DL. Rondon is promoted, having struck out nine and walked two in 7 2/3 Triple-A innings, but Leyland doesn’t plan to use him in save situations right away.

April 24
After Valverde pitches three scoreless innings for High-A Lakeland, striking out four with two walks, the minor-league contract becomes a major-league contract for roughly $2 million, with another $3 million in incentives. And Valverde, whom no one wanted all winter, becomes a closer.

On March 22, Boras said, “I don't understand why people think his value will drop. His value only rises because there's a greater need now. The demand for him is created by attrition when teams learn that their younger pitching can't meet their need.”

He was talking about Kyle Lohse, but the same principle applies to Valverde. Maybe Dombrowski meant it when he said he wouldn’t bring Valverde back. But he said that almost six months ago, and circumstances have changed. Dotel got hurt. Rondon’s spring confirmed Leyland’s worst fears about the perils of relying on rookie closers (another common refrain from Boras). Brayan Villarreal looked even shakier, walking eight in his first 4 ½ innings. There weren’t many attractive free-agent options available in April, but there was Valverde, the devil Detroit knew. Leyland likes him, and he wasn’t enamored of his other ninth-inning options. And maybe the memories of the October breakup had faded just enough for Dombrowski to remember the good times and give getting back together a try. Falling back into old habits with familiar faces is easy.

Valverde has tried to show the Tigers that he’s changed. He’s lost weight, developed a new entrance ritual, and grown a new multi-colored goatee. He’s pitching from the windup and going without goggles. He’s even on Twitter now.

But that’s mostly superficial. In the end, all that will matter is whether the stuff is the same. It didn’t look dramatically different in his first outing, when he threw 18 straight four-seamers, eschewing the splitter because it was cold. Valverde didn’t miss any bats, though he did get a good review from Alex Avila, who’s a little less than impartial but who echoed some of the nice things scouts have said. And maybe his velo will tick up a bit when the weather gets warmer. But it might not be long before the Tigers remember why they went into the winter planning to let Valverde walk. By then, maybe Rondon will be ready, or Dotel will be back, or Detroit will have met someone younger, with sexier stuff. The next time Dombrowski says it's over, the separation will probably stick.

Thanks to Tim Collins and Ryan Lind for research assistance.

You need to be logged in to comment. Login or Subscribe
greendrummer
count me among those blown away that Detroit brought him back
although this seems to be fodder that closing is primarily a mental thing and there are always 2nd, 3rd and 4th chances for those who have succeeded in the role just once before

liked this line: 'Falling back into old habits with familiar faces is easy.'
personal experience here Ben?
Reply to greendrummer
bornyank1
Yes. I write about Jose Molina every week.
Reply to bornyank1
mattsussman
It didn't feel like him. Sure, he did the water spit and the hop step out of the bullpen. But so many things were different, it felt like I was watching a ghost take the baseball and pitch. Things are back to the way they were but they are also supposed to change.

I suppose if there was less pressure on this team to be the best, they'd get through the growing pains. I felt great for him for that clean inning, but I kind of wish they'd have brought him back for One More Save, so we can all move on and get through these bullpen growing pains, because among all these arms has to be a capable ninth inning man.
Reply to mattsussman
donwinningham
Valverde is back simply to tutor Rondon in the art of Acting Like an Asshole, which is a key part of Closer Mentality(tm).
Reply to donwinningham
andrews
As someone who lived through every pitch of the blown saves in the postseason (especially the Yankees one - they were,'t just any old blown save's they were meltdowns) he did look appreciably better last night. Time will tell of course.

if he is on a $2m guaranteed plus incentives contract then the downside risk is much lower than if the Tigers had resigned him last autumn to a much bigger deal.
Reply to andrews
lmarighi
I think commenter andrews above makes the key point, which is that it seems unlikely the Tigers could have signed him to this deal back in the fall, and this deal seems much easier to eat if necessary that whatever imagined deals were floating around in November.
Reply to lmarighi
rawagman
Some of the old flame comments remind me of the Ben Folds/Nick Hornsby tune, Belinda,
Belinda, I loved you
I'm sorry that i left you
I met somebody younger on a plane
She had big breasts
A nice smile
No kids either
She gave me complimentary champagne
.....
But he's not there, he's somewhere else
He's with Belinda
In the days before he made it all go wrong

Reply to rawagman
fuzwoz
Ben, more of this type of article...enjoyed the careful tracking of the history of this situation. We may not know what the principles of the story were thinking/hoping but seeing the timeline lets us fill in the gaps in a way.