On Wednesday, the St. Paul Pioneer Press published a piece by Mike Berardino about how the Twins—well, more like one full-time employee of the Twins—are starting to explore sabermetrics. It's worth a read. The article won't leave you with the sense that the Twins are anywhere close to the cutting edge, relative to teams that aren't the Phillies, but at least they're not opposed to the idea of incorporating statistics into their decision making.

Toward the end of the article, Berardino quizzes Twins GM Terry Ryan on some stats he uses:

How about BABIP — batting average on balls in play?

An average BABIP is about .300, which means Worley's 2012 figure of .341 suggests he was pitching in bad luck as much as bad health (bone chips in his elbow).

"You can deduce that, but he's also a year-plus player," Ryan says, citing Worley's limited service time. "He hasn't been around hardly at all. Plus, he was hurt."

Ryan is right to point out that Worley's elbow injury might have made him more hittable. But what about his contention that most young pitchers have high BABIPs? Here's pitcher BABIP broken down by age over the past 10 seasons, a period during which the league average was .293. 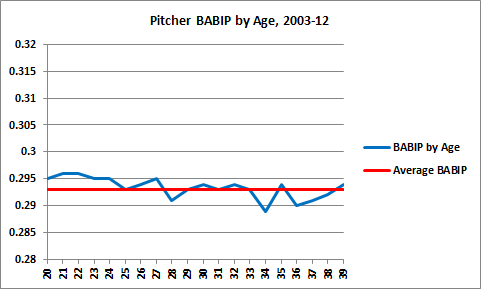 Ryan is right in the sense that if you were to pluck a typical teenage pitcher out of A ball and put him in the American League, he'd probably have a high BABIP. But among pitchers who have made the majors, there's really no trend toward higher BABIPs at an early age. If anything, it's more likely to be the oppositeâ€‹—there's probably some survivor bias in the stats above, since pitchers whose BABIPs increased over time would have tended to drop out of the sample sooner. Worley might be healthier and luckier this season than he was in 2012, but if he's anything like most big-league pitchers, another year of experience won't improve his skill at preventing hits on balls in play.

You need to be logged in to comment. Login or Subscribe
studes
I don't understand. Doesn't the graph show a downward trend? I know survivor bias and all that, but doesn't the basic graph exhibit Ryan's trend?
Reply to studes
sahmed
At most five points of BABIP, and with enough variance to look like there's no meaningful trend in this basic look.
Reply to sahmed
studes
Okay, thanks. But five points of BABIP is something--could be half a run in ERA over a full season, right? And I understand variation, but this is a big sample.
Reply to studes
bornyank1
Well, I guess it could be something, but it doesn't seem to be a very clear trend. The average BABIP was .295 at age 20, .295 at ages 23 and 24, and .295 at age 27. And .293 at age 25, .293 at age 29, .293 at age 33, etc. From ages 20-29, it was .294, and from ages 30-39, it was .293. I doubt a difference of a point or two (if that difference is even real, given the likely survivor bias) is what Ryan meant when he said most young pitchers' BABIPs are "high."
Reply to bornyank1
studes
From looking at the graph, ages 34 plus could be .292, a three-point difference. Agree about the survivor bias. Just saying that the graph didn't automatically make your argument for you, IMO.
Reply to studes
TangoTiger1
Five points in BABIP is 0.10 in ERA.
Reply to TangoTiger1
studes
I believe you, but here's how I did my math. Let's say a full-season pitcher incurs about 600 balls in play in a year. 5% of 600 is 30 outs that become hits, true? Apply half a run (difference of hit vs. out) to each ball, that's 15 runs. 15/200 innings times nine innings is 0.675 runs--I conservatively said half a run.

One additional point about how the variance is important: The population may be large on the whole, but teams have to care much more about applying it back to an individual. If you were to choose between two pitchers based on expected differences (of five points of BABIP), wouldn't you expect a ton of overlap in observed BABIP? And I would venture that there'd still be a ton of overlap looking at population means for an entire staff of young vs. old. So that's why I don't see a meaningful trend here, along with Ben.

That said, it could be worth testing whether controlling for other factors make age a more significant predictor. (When is it not?)
Reply to sahmed
TangoTiger1
5 points is 0.005, which times 600 is 3.
Reply to TangoTiger1
studes
Duh! thanks.
Reply to studes
Bridmen
He did say most a bunch of times, so that should count for something.
Reply to Bridmen
Schere
This would be interesting to see in terms of service time, as well, since he puts that forward too.
Reply to Schere
bornyank1
Yes, would be worth looking at. It's a little harder to look up, though, and you'd think that a service time trend would also show up in the breakdown by age.
Reply to bornyank1
Schere
Might be different, I think. There are plenty of short pitcher careers happening all across the age spectrum.

Reply to Schere
Schere
and I guess you'd want to use a median pitcher BABIP rather than aggregate BABIP.

If we're to be as kind as possible to Mr. Ryan, that is.
Reply to Schere
pizzacutter
I ran a mixed-linear model, controlling for pitcher identity AR(1) covariance matrix. I looked at the effects of age (as a fixed linear covariate). 2003-2012.

The effect of age was non-sig (p = .55) although the trend line was pointing down, by about a ten thousandth of a point each year of age.
Reply to pizzacutter
Schere
a ten thousandth, meaning a tenth of a "point" of BABIP?
Reply to Schere