Something is amiss with Joey Votto. Sure, he’s getting his walks, but as the Big Bat in the lineup paid to drive in runs, he’s struggling tremendously. He has just eight runs batted in—fewer than hardly noted run producers like Yuniesky Betancourt, Brett Gardner, Marlon Byrd and notoriously light-hitting teammate Zack Cozart. Clearly, with the overly passive Votto, there’s trouble in River City.

That’s one way to look at the first 22 games of the best player on the National League Central favorite Cincinnati Reds. Maybe how we would have evaluated him in 1980.

The other—and frankly preferred—way to look at the April of Votto is that he’s been better than his MVP season of 2010, and that’s probably a good place to start the story.

That was the last year in which he swung at more pitches than the average hitter, and it’s been downhill (though not necessarily in the bad connotation of that word) ever since. While baseball as a whole takes the bat off its collective shoulder roughly 45 percent of the time, Votto’s number dropped almost five percentage points the following year, from 47.4 percent to 42.6 percent. Then last year, an equal drop to 37.8 percent, and he’s down again this year, finishing Tuesday’s game against the Cubs at 36.0 percent—among the lowest in the sport.

Here’s a look at his rates over the years.

So yes, passive to almost an extreme.

But Votto’s value has still been there. He leads the National League in walks by a sizeable margin, with 26 in his first 22 games. That’s nothing new. In both his MVP year of 2010 and what may have been an underappreciated 2011 on a lesser team, he led the league in on-base percentage. Last year, a knee injury kept him from qualifying for rate stat titles, but if he had, his on-base percentage would have led the National League by 66 points over Buster Posey’s total.

Now, don’t let Votto’s RBI total fool you. He may not have driven in many runs himself, but his on-base ability has pumped up the stats of the guys hitting behind him (lesser hitters Brandon Phillips and Jay Bruce), who are riding Votto and the magnificent base-reacher Shin-Soo Choo to their inflated RBI totals.

In WARP, with 1.0 through what essentially amounts to one eighth of the season, Votto is ahead of his 2010 clip, when he finished with 6.7. That’s without any help from his defense, which rates as negative thus far this year, or his position.

If you evaluate Votto’s offensive performance by OPS, he hasn’t been as good, but that’s been one of the knocks on that halfhearted formula—that OPS undervalues the “O,” which is Votto’s strength, and overvalues his declining skill of “S.” In linear-weighted statistics and in the all-encompassing metric of WARP, he rates much better.

The only danger for Votto now is in responding to the misguided pressure and trying to be a type of hitter that he’s not. He’s been trending the wrong way the last few games, with more swinging strikeouts and less patience, whether or not it’s a conscious response. We got a look at that in the swinging strikeout that ended the game on Tuesday night, which served as a warning against changing his habits as a hitter.

As of the end of that game, Votto had one of the lowest swing rates in the major leagues on pitches out of the strike zone, something all hitters are essentially trying to minimize.

He was handling the fan and media questions about his lack of the usual means of production well, saying that there were many ways to be a good hitter, and that if he’s not going to be a home run hitter, he’s still going to do things of value at the plate, like draw walks.

Even his manager Dusty Baker, who drew heat this week for comments to the Cincinnati media about his preference for RBIs over on-base percentage, sounded a little better in context. Really, he wants both. But who doesn’t want a diamond watch that also gets email?

But in one of those situations where conventional thinking wants RBI guys to be RBI guys, Votto tried a little too hard and swung at a bad pitch out of the strike zone to end the game down by two runs with two men on. It’s the farthest one outside in this PITCHf/x shot. 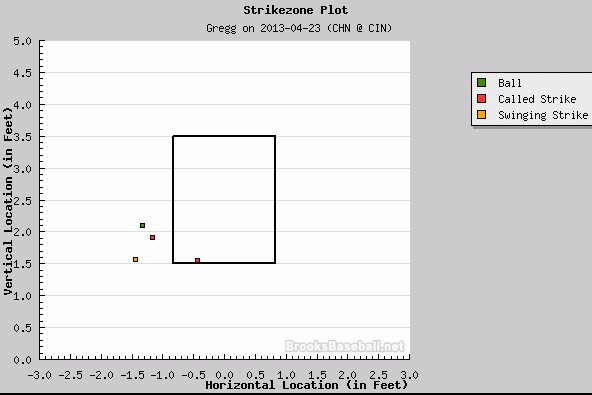 It’s important to remember that Votto is not Giancarlo Stanton, who still should draw walks but has a little better case for having to be “the guy” in his awful Miami Marlins lineup. Votto has Brandon Phillips, Jay Bruce, and Todd Frazier hitting behind him most days. (If there’s any issue, it’s that Cozart is hitting ahead of him, but that’s a topic for another day.)

Votto’s slugging percentage is down 151 points since the .600 he posted in his MVP campaign, but in remaking himself as an eternally patient hitter, he may be turning himself into an even better offensive player. And nobody should try to tinker with what’s working at an All-Star level, if not beyond.

You need to be logged in to comment. Login or Subscribe
JeffreyLyon
I'm assuming "that OPS undervalues the 'O,' which is Votto's strength, and undervalues his declining skill in 'S,'" should read "overvalues his declining skill in 'S.'"
Reply to JeffreyLyon
bornyank1
Fixed.
Reply to bornyank1
redsfan1470
Someone should print this out and show it to the Brennamans.
Reply to redsfan1470
gweedoh565
+a million. Even Marty is becoming unlistenable.
Reply to gweedoh565
redsfan1470
I don't really know why they're so incessantly negative.

It's causing me to have flashbacks of listening to Billy Packer to NCAA basketball games.

I watch/listen to baseball because I actually LIKE baseball. They don't have to be delusional homers like Santo, but I'd rather have some benign homerism a la Mike Shannon than a constant drumbeat of disgusted complaints.
Reply to redsfan1470
drawbb
You may want to clarify the statement about Votto not leading the NL in OBP last year. Baseball Reference and Retrosheet list him as the league leader, explicitly relying on the "add extra hitless plate appearances" rule that occasionally has arisen over the years in the batting average category.

Votto fell 27 PA short and Stanton just 1 PA short of the 502 minimum. When adding the extra outs both still were easily the leaders in OBP and SLG, respectively. I remember MLB issuing an overt statement on Posey's eligibility to lead in AVG over Melky Cabrera, but do not recall if they did the same on these other two categories.
Reply to drawbb