Over the weekend, I posted a brief blog post showing how many team shutouts baseball had already seen in the 2013 season. 294 baseball games have been played in the month of April and 53 of them have involved one team being shut out. If the rest of April held up at the current pace, we would have 68 shutouts by May 1st and 437 by season's end.

Out of curiosity, I asked our crack stats team for some help in pulling the monthly team shutout data from our database. They were kind enough to pull a report that shows the number of team shutouts, games for that month, the percentage of shutouts in each month, as well as the runs per game in each month.

The most team shutouts we have seen in any given month is 71. That total has happened two times, both in the month of August. The first time was in 1968, which is commonly known as the year of the pitcher and the second time was during the 1972 season. If this month's current pace does hold up, it would tie for the second-highest total in any one month.

There was something about the 1972 season as its final three months all made the list. That season is remembered for a late start due to labor strife, both Nolan Ryan and Steve Carlton striking out over 300 batters, and Luis Tiant and Carlton winning the ERA titles with sub 2.00 ERA's. A surprising observation is the fact that eight of the highest months on record came toward the end of the season. September shutouts are not terribly surprising given the amount of roster dilution from expanded rosters and managers' ability to increase their bullpen usage. August shutout totals seemed high, but maybe just to those of us who live in the deep south where the cool weather is but a dream. Using the same data set, these are the average runs per game totals by month: 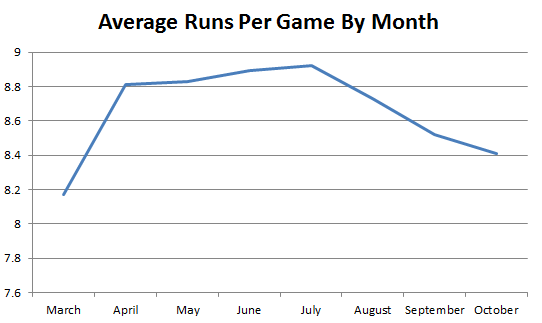 Where April 2013 truly stands out so far is in its percentage of games involving a shutout. Currently, 53 of the 294 games in April have involved a team being shutout which is 18 percent of the overall games. While that number seems high, it is but the 26th highest percentage in the sample size of 64 seasons. May of 1968 saw 64 of its 279 games involve a shutout, and that 23 percent is the high-water mark for a monthly shutout rate. If we look for another month from a season within this millennium, we have to go down 46 spots to June of 2012 which saw 16 percent of its games involve a shutout (63 of 404).

As far as April goes, 2013 has already eclipsed the highest raw total of team shutouts for any April in the past 63 seasons doing so with the seventh-highest percentage of games. In terms of runs per game, the 8.44 run per 2013 April game is the lowest rate since….April 2012 when 8.35 runs per game were scored which ranks as the lowest average of this millennium.

You need to be logged in to comment. Login or Subscribe
bhalpern
There was another article on BP about the huge drop in SB attempts. I wonder if the two are related in some way? Is the number of shutouts part of a larger trend of lower scoring for the month?
Reply to bhalpern
Michael
I don't know what was unusually about the last three months of 1972, but I'd guess the trend was noticed at the time. That next off-season, the American League adopted the Designated Hitter rule.
Reply to Michael
moonlightj
excellent point
Reply to moonlightj