On Sunday, Eric Stults faced Pablo Sandoval with two outs and a runner on third base. These are the pitches he threw: 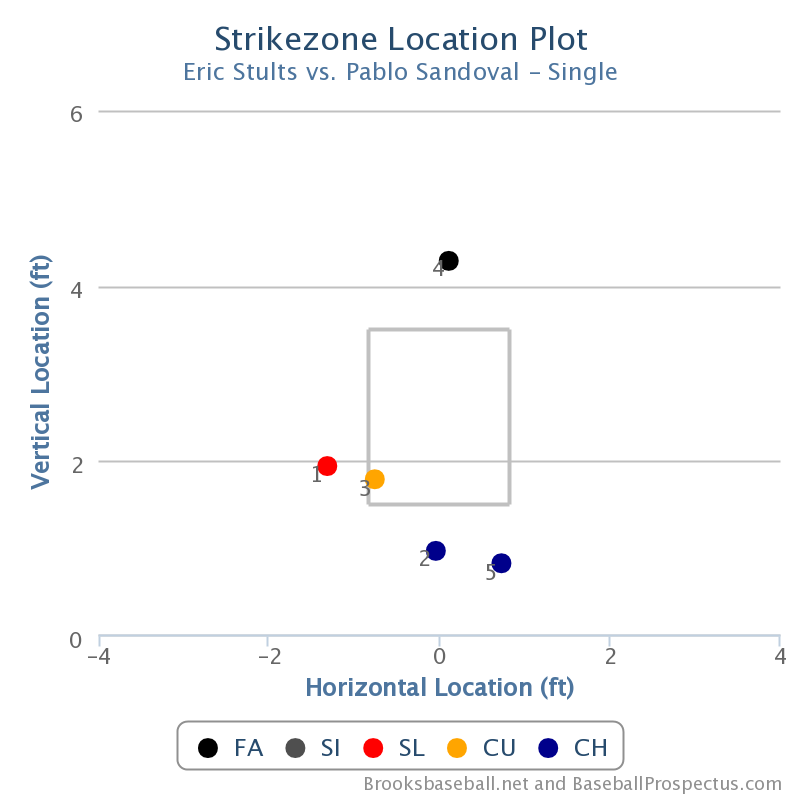 A picture can tell a whole story sometimes, and here the story is pretty obvious: Stults walked Sandoval on five pitches, coaxing the famously eager hitter to swing at one pitch Sandoval probably wishes he hadnâ€™t (the 2-0 curve at the lower-inside corner) but otherwise pitching him carefully and losing him to baseballâ€™s strict four-balls rule.

Thatâ€™s not the story at all, though. What actually happened is that Pablo Sandoval swung at all five of these pitches. Stults threw five chase pitches in a row, Sandoval chased all five, and on the fifth he hit a changeup that was 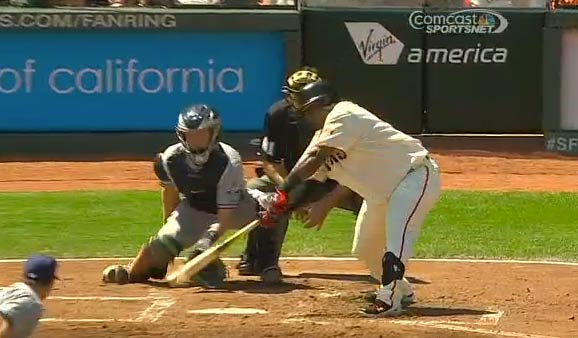 otherwise going to get scuffed and thrown into the batting-practice bucket. He got a hit, and the run scored. This is what Sandoval does. I canâ€™t surprise you with descriptions of Pablo Sandoval. But what I can do is go through the most Pablo Sandoval at-bats of Pablo Sandovalâ€™s career. These are they!

[The methodology is as such: We measured how cumulatively far from the center of the strike zone Pablo Sandoval’s bat traveled in each at-bat of his career. If he chased a pitch that was two feet higher than the center of the zone, and then a pitch that was 21 inches low-and-away from the center of the zone, he would have covered a total of 3.75 feet. Only swings at non-strike zone pitches were counted, so he is not ‘penalized’ for pitches within the strike zone that he swung at.Â AÂ 10-pitch at-bat that included only two swings at pitches outside the zone is counted for our purposes as a two-swing at-bat. We used a normalized strike zone (so his zone from the left side, for instance, is different than from the right side) and we adjusted for each ballparkâ€™s PITCHf/x calibration.]

The story you’d expect from that picture: Ubaldo Jimenez went right after Sandoval, who fought off strikes until Jimenez misfired and hit Sandoval on the foot. A theme of these screengrabs is you’re going to look at them and then ask me where the ball is. The answer, for all of them, is “way over there.”

This isnâ€™t the farthest Pablo Sandoval has ever traveled for a swing, but itâ€™s close. The farthest is 4.8 feet, against Charlie Morton. Guess what: youâ€™re going to get to see it! This curveball from Ubaldo Jimenez is, however, the fourth-worst pitch he has ever swung at. The 42 worst pitches he has swung at have all been sliders or curveballs, so at least thereâ€™s some logic to these swings.

This was, of course, a checked swing, and umpire Derryl Cousins ruled that he went around. Or did he? Perhaps he wasnâ€™t making a ruling at all, so much as pointing at Pablo Sandoval and laughing: â€œLOL look at what you did.â€ â€œLOL,â€ Ubaldo Jimenez adds. â€œLook what he did.â€ Same result either way, I suppose.

The story you’d expect from that picture: After getting ahead with a changeup, Charlie Morton came too far inside on Sandoval. Both teams had already been warned about inside pitches because of some lingering tension over a series of hit batsmen the night before, so Morton was tossed from the game, along with his manager John Russell. The third pitch of the at-bat was thrown by a reliever, which is why it doesn’t appear on this plot. That’s the third pitch of the at-bat, wild enough apparently not to appear on the matchup plot above. Here’s how the Pirates announcer responded to Sandoval’s swing:Â 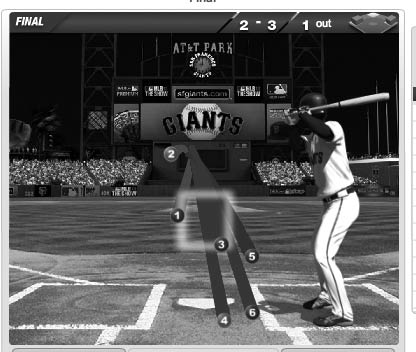 The story you’d expect from that picture: Typical Sandoval aggressively chased two pitches on the very edge of the strike zone, but at least he did finally get his walk off a wild Tommy Hanson.Â

What actually happened: He swung at everything but 2 and 4, and he darned near swung at 4. Here’s 6: Like the other two so far, this one ended with a strikeout.

The story you’d expect from that picture: After a four-pitch walk, aÂ PITCHf/x glitch mistakenly added a pitch labeled “6” that never actually happened.Â

What actually happened: He swung at every pitch that you see except for the fastball, the black dot. He did put the ball in play, as Hanson finally gave him a hittable pitch on no. 6 and he grounded out.Â Nobody has flummoxed Sandoval quite like Hanson, who induced four of the 23 wildest swings of Sandovalâ€™s career, and seven of the 79 wildest. A Hanson at-bat finished fifth in the one-swing category, and a Hanson at-bat finished third in the two-swing category. In 46 pitches to Sandoval, Hanson has come into the strike zone just 13 times; Sandoval swung at nine of those, but he also swung at 18 of the 33 out of the zone. Watching Hanson pitch in 2009 (highlights of the start are online; just none of him against Sandoval) and watching him pitch in 2012 is startling. In 2009, Hanson evokes Matt Harvey; in 2012, he evokes maybe a right-handed Jason Vargas. And yet Sandoval canâ€™t lay off either guyâ€™s curveball.

The story you’d expect from that picture: A child with some sort of heartbreaking story was allowed to pitch in a major-league game, as like a nice gesture. Sandoval, under orders by his team’s owner to strike out “and make it look convincing,” wanted to take three nice big whiffs at three nice slow strikes.Â Well, that kid tried, but he just couldn’t get a pitch over the plate. Ball after ball came. Sandoval looked around for guidance, but nobody knew what he should do. “Isn’t that four balls?” the kid asked after pitch 5. “No,” Sandoval hollered back. “That’s only, uh, that’s only two.” After pitch 8, the kid was certain it had been at least four balls, but Sandoval reassured him that in the majors it takes six balls to draw a walk, that’s why it’s so hard to play in the majors. Ball after ball after ball after ball until finally Sandoval realized, shoot, that’s not a kid at all, that’s Chris Volstad, and he took his base.Â

What actually happened: Sandoval swung at eight of those pitches, and not the eight you’re hoping. Here’s no. 6, which he fouls off. Â And now for the main event:

Pablo Sandoval: The guy with a higher OPS+ since 2009 than Justin Upton, Mark Teixeira, Alex Rodriguez, Ryan Zimmerman, Aramis Ramirez, Adrian Beltre. Pablo Sandoval: Some kind of genius, or else some kind of disjointed fever dream that we’re all having together.

Thanks to Ryan Lind and R.J. Anderson for research assistance

You need to be logged in to comment. Login or Subscribe
GoTribe06
This may be my new favorite article of yours, Sam! The stories we'd expect are fabulous, and all more believable than the truth.
Reply to GoTribe06
clachan
A pupil of the Vladimir Guerrero school of hitting...
Reply to clachan
dantroy
Just amazing.
Reply to dantroy
PeterCollery
Awesome.
Reply to PeterCollery
maphal
LOL indeed, Sam. Why do pitchers ever throw Sandoval strikes?
Reply to maphal
jdeich
Going by the gifs, the catchers must be dreading Pablo's PAs. I wonder how many times he's pulled off the dreaded "WP on swinging strike".
Reply to jdeich
BHayes
This was one of my fave BP articles since I subscribed! Incredible insight and also love the McC Pablo HR article that followed. As a Giant fan, if I'm watching the live MLB-TV feed while on my PC and have it minimized in the background, I ALWAYS stop to watch the Pablo AB's. Learned early on not to blink with this guy at the plate.
Reply to BHayes