We often think of baseball players as being the Boys of Summer. We envision the warmth of the sun on our face while we are laughing with the kids who are on break from school. The ballpark experience is the full embodiment of “summer.”

The problem is, we’re not quite there yet. Just because the 2013 season is underway doesn’t mean that we’re getting summertime weather. Far from it.

It’s April, and that means that we’re still in the throes of spring weather. Be it rain or snow, the weather can wreak havoc on attendance—in April and even in May.

A qualifier is needed here. Sometimes, sports business reporter Darren Rovell will take pictures of open-air ballparks around the league early in the season, showing empty seats, and ask, “Is baseball a dying sport?” The answer, of course, is “no.” Last season, MLB saw attendance at 74,859,268 across 2,423 dates. While this isn’t the high-water mark for the league (that was 79,503,175 in 2007), it was up from 2011, when the league saw 73,451,522 tickets sold. So, Rovell and others may want to hold off on those pictures.

That isn’t to say that these early-season rainouts don’t matter; they do now more than in years past. As part of the latest collective bargaining agreement, the players get an extra day off after the All-Star Game, meaning there are now four straight days in the middle of the season when no baseball is played. Then there’s the added time needed for the new wild card playoff play-in game, and the need to have time in the schedule to allow for any potential tiebreaker games for the postseason to be played. It all adds up to more doubleheaders, teams potentially traveling when they otherwise wouldn’t, and, if a pair of teams are out of the running for the postseason, some games being washed away entirely.

Since this is the weather, and you can’t predict with 100 percent certainty how it will impact baseball from year to year, the rainout numbers have ebbed and flowed. Last season was good (eight rainouts in April, the lowest amount since 2010, when there were just two), but this year has not been great. In fact, if the weather gods want to really mess with baseball, this season could potentially see the third-highest total of rainouts since 2000. 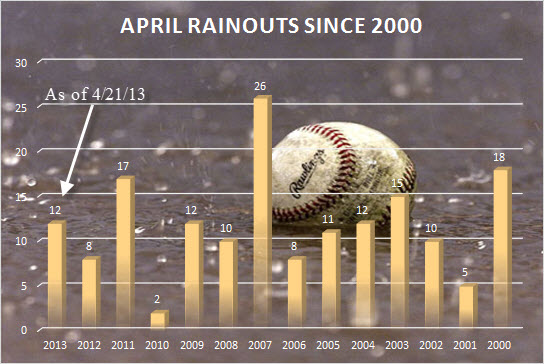 As of Sunday, there had been 12 weather-related cancellations in Major League Baseball (the tragic events in Boston caused the cancellation of Friday’s Royals-Red Sox game, but that is not being counted in our data) and there are still nine days left in the month. There were three weather-related cancellations on Wednesday alone (Texas at Chicago Cubs, LA Angels at Minnesota, NY Mets at Colorado, the last of which was a snowout). Every attempt will be made to make up these games, but day-night double-headers aren’t as vigorously attended as they once were.

Interestingly, the advent of retractable-roof facilities is no sure bet to benefit attendance. Since 2000, only two new ballparks have opened in markets that did not previously have a roofed environment: Miller Park (2001, replacing Milwaukee County Stadium), and Marlins Park (2012, replacing Sun Life Stadium). That’s it. Since 2000, 14 new ballparks have opened, and Petco Park in San Diego is the only one for which no legitimate case to include a roof could have been made. Part of this is baseball culture. In places where baseball has a long, storied history, playing outdoors has been part and parcel with the game because, well—there were no retractable roofs when clubs like the Pirates, Reds, Phillies, Red Sox, Cubs and Yankees first earned their places in the entertainment culture.

Even if we remove all that, the real change is internal and external competition. In 1960, the highest average (per-game) attendance in the league was notched by the Los Angeles Dodgers, at 29,271. Only the Dodgers saw attendance above 2 million, a number that would be seen as atrocious today. Five clubs (Indians, Phillies, Cubs, Kansas City Athletics, Senators, and Reds) saw attendance below 1 million for the entire season. The Reds pulled up the bottom at just 663,486, or an average of 8,617 per game. Remember, this is part of what traditionalists still might consider part of baseball’s golden era. These were the “good old days.”

In 1960, the NFL and NBA were a shadow of what they are today. There was no internet. There weren’t 300-plus channels on your television to compete for entertainment. Baseball is the only team sport that sees weather-related cancellations (sorry, NASCAR, I’m calling you an individual sport).

It’s only April. According to the league, the record for the most rainouts in a season is 26, set in 2007. That year was MLB’s highest-attended season to date. The sport is not “dying,” not by a long shot, but weather will continue to threaten the ability of some clubs to host 81 home dates a season and could continue to diminish walk-up ticket sales.

In the future, could nearly every ballpark in the league have a retractable roof? The “future” is an awfully long time. Anything is possible.

You need to be logged in to comment. Login or Subscribe
CandyCummings
Take that Darren ! Good data and article
Reply to CandyCummings
Chiefsnark
It would be interesting to know, if the information is available, the actual number of people attending these early season games.

I went to a game last week at Comerica Edifice; the announced attendance was something like 28,000. There could not have been more than five thousand people actually in attendance.
Reply to Chiefsnark
Shankly
That is a massive discrepancy. Why do you think there would be such a difference between real and stated totals?
Reply to Shankly
buddons42
I'm guessing he's referring to a game a couple weeks ago against Toronto. It was a 1PM scheduled start weekday game that suffered from a 2 hour+ rain delay prior to the game and 30-something degree gametime temperatures. It didn't feature a marquee starter for either team(Porcello/Buehrle, I think). Combine those factors with strong season ticket sales and I think that explains most of the discrepancy between tickets sold and people who actually showed up. If a full season ticket holder was going to pick one game this year to skip, that was probably the one they would have picked.
Reply to buddons42
mbrown
Remember, the league went away from turnstile counts to "paid attendance" in the '90s. This was done when tickets sold counted against revenue-sharing. I've written about this prior, but a club that sees solid offseason season ticket sales can see fairly high paid attendance announced with actual butts in the seats being low. This can happen when offseason expectations are high but when the season starts the team does not meet those expectations. The Blue Jays certainly fit that description early in the season.
Reply to mbrown
AWBenkert
The population has increased by about 100 million since 1960; I imagine that accounts for most of the increase in attendance.
Reply to AWBenkert