Earlier today, the Mets shut out the Nationals 2-0 marking the 49th time in the young 2013 season that a baseball team has failed to score in a game. If that seems like a high number, it is. Since the league last expanded in 1998, the most amount of shutouts in a season's first full month is 52 which happened in the 2011 season. The fewest amount of shutouts happened in 2000 when there were just 29 shutouts in the first full month of that season. 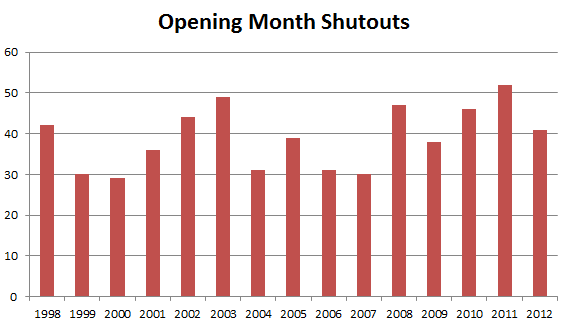 There are nine more days of baseball this month which likely means baseball will set a new record in the 30-team era but the league is already at a scary shutout pace. Coming into today, there had been 505 games played across baseball. Each seasons, there are 4,860 games played so 48 shutouts in 505 games puts baseball on a pace for 461 shutouts which would eviscerate the current record. 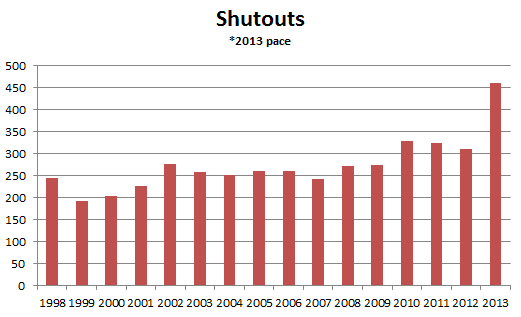 Cold weather may be a factor in the rash of the shutouts so far, but just 18 of the 49 shutouts in 2013 have come in games where the temperature has been 60 degrees or less according to Baseball-Reference.com's PlayIndex. The following teams have been shutout in 2013 at the following frequency:

You need to be logged in to comment. Login or Subscribe
EthanSpalding
The Diamondbacks are just too gritty to be shut out.
Reply to EthanSpalding
LlarryA
I know you're being facetious, but, while I abhor most of Gibby's in-game managing, I love the attitude he fosters. They may fail, but they won't give up.
Reply to LlarryA
sporer24
Of course the Tigers were shutout a league-low 2 times last year going all the way until 7/17 before first being goosed. So yeah, totally makes sense that their lineup gets better and they get blanked three times in the first three weeks, LOL!
Reply to sporer24
wizstan
Counting the post season they have been shut out six times in the last 29 times games. That would put them at about 30 in a full season.
Reply to wizstan