Previous history
The two were drafted in the same first round, and the two debuted in the majors within a couple months of each other, so as you might imagine, they played in the same league a couple times as they moved up the ladder. Harper and Harvey both played in the Double-A Eastern League during the second half of 2011, and both played in the Triple-A International League to start the 2012 season. While they were in Triple-A, they faced off at least once, the video tells us. The super sexy conclusion:

"He carved me" in the minors, Harper recalled this week.

They faced each other three times in September when both were in the majors, and Harvey won the day handily, striking Harper out twice in three hitless at-bats. Two notable characteristics of those at-bats: He threw Harper five changeups (against a typical left-handed hitter, he’d have thrown, on average, three) and he loaded up on high fastballs. The first AB: 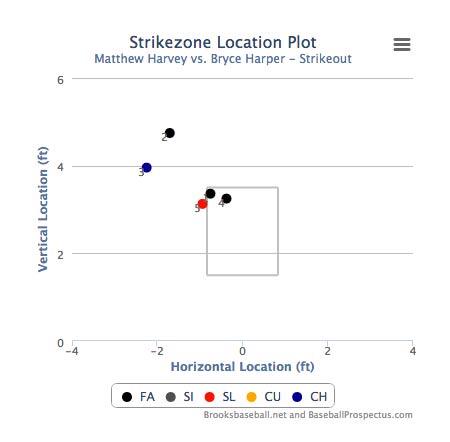 (He did mix his locations more in later at-bats.)

They faced each other again in spring training this year, in the second week of March. Harvey allowed three runs in four innings that day, and all the runs came on a no-doubter by Bryce Harper. It was a 1-2 fastball that Harper pulled over the right-center field wall. Harper struck out against him later in the game.

"It was a high fastball," Harper said. "He got me at their place a couple times, and he got me my second AB (today). Just tip your cap to a guy like that. He's an unbelievable pitcher. He's pretty amazing out there.”

“He’s an All-Star,” Harvey said. “He’s Bryce Harper, so obviously you’ve got to lock in. I made a bad pitch to him, but I learned from it. And moving on from there, it’s something I’ll remember going into the season for future events.”

Harvey's throwing real, real hard in the first inning. How hard, you might ask Denard Span? This hard, Denard Span might tell you in a GIF:

That was 99 mph. His first two pitches to Harper were each 98. I wrote last year about Harper's toughest at-bats, against guys like Craig Kimbrel and Aroldis Chapman, and noted that Harper is most vulnerable to high, 99 mph fastballs—not because he can't hit them (nobody can, really) but because he seems to think he can, and so he'll go after them. That's how the Kimbrels and Chapmans pitched to him, but, of course, few pitchers can pull that off. Harvey can, and so with two strikes we look for Harvey to try it, and Harvey tries it:

That's not just high, as much as it's literally at his eyes, at least as he loads his swing and the pitch comes in. It's at his nose, at least. It's also 99.27 mph, the second-fastest pitch Harvey will throw all day (behind the pitch to Span that you saw above). The fact that Harper got a piece of it is remarkable.

The ball travels about eight or nine feet per frame. These are the final two frames, and contact: The pitch is within 18 feet of him, and his bat is still behind his head. You'd look at this frame and say he's taking the pitch. It's 18 feet away, going 99 mph. Now it's within nine feet. Nine feet. Look up and find something that's nine feet away from you. No, closer than that. No, seriously, measure it, that's probably 13 feet away from you; find something closer. That trash can, right there. Yeah, that's nine feet. Now imagine it's coming 99.27 mph at you. That's how little time Harper's bat has to go from where it is in the frame above, to where it is in the frame below, and I frankly can't get my head around that. Maybe all major-league hitters' bats are that fast, but regardless: his bat is so fast.

Then Harvey drops a curve on him.

Harvey beats Harper to the bag, and he wins the first battle.

On the first pitch you see a curveball to Harper. On the second, another fastball, though this one is just 95 mph and Harper fouls it off. It's up, though, and Harvey's fastball is always difficult to hit when it's up. Here's his pitch chart limited to contact rate on fastballs:

A 20 percent whiff rate on fastballs at the knees is really impressive. Zack Greinke's fastball whiff rate, for instance, is 16 percent in his career, and Zack Greinke has a really good fastball. But as Harvey moves up in the zone, his fastball gets predictably harder to hit, and when batters have swung in the top third of the zone or higher they have whiffed exactly half the time this year. You'll recall that, in spring training, Harper caught up to one of those pitches and hit it out. But so far in this game, he's been unable to lay off the high fastball, unable to quite catch up to the high fastball, and perhaps more prone to breaking pitches down after the high fastball. He hung in well on the curve in the first, but was way over the top of it. On the 0-2 slider here, after the high fastball, he's way out in front, his hips have flown open, and he reaches the pitch with an all-arms flail: The first pitch was a slider. The second was a changeup, one of eight so-so changeups Harvey threw all game (four called strikes, followed by three balls, followed by a runner reaching on an error). Harper is ahead 2-0.

Mark Simon wrote about Harper's weakness, and how it matches up against Harvey's strength, before this matchup took place:

The holes in Harper’s game are hard to find, but one is that he (like many other hitters) has not yet established himself against some of the game’s hardest throwers — the guys in Harvey’s class.

Harper has faced 18 right-handed pitchers whose average fastball over the last two seasons was 94 miles-per-hour or higher.

If we include postseason play, Harper is 2-for-33 with 14 strikeouts and no walks against that group since his career began.

He came up empty of 27 of the 77 swings he took, a 35 percent miss rate that was more than 10 percentage points higher than his miss rate against other pitchers. He couldn’t catch up to the fastball and was vulnerable to the varied offspeed offerings that came his way.

During the broadcast, the Mets' announcers noted Simon's research, and Ron Darling theorized that Harper's long swing is suited for off-speed stuff, not fastballs. But if I had to guess, based on the at-bats I've seen Harper have against Harvey, Kimbrel, Chapman, Jansen, etc., I'd guess that this record will smooth itself out. Now, as noted throughout the piece, Harper has a weakness for high fastballs. It's probably a weakness that  served him well growing up, with a bat far quicker than any of his teammates. But it's a weakness that can be every bit as damaging as a weakness for sliders low and away. It's the pitcher's pitch, in the pitcher's spot, and it's just darned hard to catch up to it and hit it. It also sets up the low and slow stuff that follows.

And yet Harper does catch up to, or nearly catch up to, impossibly fast pitches. Sure, his swing is long; but Denard Span's is short, and Denard Span was a lot later on Harvey's fastball than Harper ever was in this game. And, once Harper finally got ahead in a count, there was no amount of heat that Harvey was going to get by him, and Harper hit what might have been the squarest contact that any Nationals hitter managed all game:

Yeah, that's an out, but only because baseball is about the most arbitrary sport in the world. It was a perfect swing, and perfect contact. Harvey wins round three, because the judges were crooked.

The game stories out of this game don't mention Harper's role in the action, so we don't know what he thought of Harvey on Friday, or what Harvey thought of him. We don't know if Harvey, as he pledged in spring training, truly did learn from his encounter with Harper in spring training, and whether Harper noticed if he did. Rather, this game was framed as a matchup between Harvey and Strasburg. "The 26,675 fans at Citi Field celebrated, breaking into cheers of 'Harvey's better!' that bounced around the ballpark," one writer described. But Harvey and Strasburg weren't competing against each other so much as they were competing parallel to each other; neither pitcher's greatness was affected by the other. Harvey vs. Harper, on the other hand, was a matchup that challenged each to be his best. At times, each was.

Thanks for pieces like this. You are teaching me how to better think about baseball.
Reply to msbirt
jfribley
Tangential, but batter's eye view gif is a lot of fun. It's good to know I couldn't hit a minor-league curveball, much less a major-league curveball.

..it is a curveball, right?
Reply to jfribley
tannerg
Reply to tannerg
Schere
First pitch in the second at bat was definitely a curve, not a change.

I love this post.
Reply to Schere
lyricalkiller
yes, ugh duh, curve not a change
Reply to lyricalkiller
boatman44
Sam, you should put the gif of Evan Gattis hitting Strasburg with that short arm jab to the fences, that was a thing to behold.
Reply to boatman44
Robotey
Sam - great story - Harvey clearly knows how and when to go 'up the ladder', a vital skill which too many pitch to contact hurlers don't get