Before we get to the rankings and GIFs, a brief detour. In the comments section of Sam Miller’s article about Hector Sanchez’s poor framing in Tim Lincecum’s first start of the season, reader “jdeich” floated the possibility of a link between good receiving skills and a selective approach at the plate:

I can't help wondering if Hack-tor just doesn't recognize pitches well out of the pitcher's hand (in general), and that leads to both his framing problems and his ridiculously poor batting eye. (2012: 5 BB in 227 PA, vs. 52 K.)

Does good framing ability correlate with a good batting eye? Obviously the catcher has the advantage of knowing what pitch was called, but he still must react to the precise location and break of what is thrown.

Josa Molina certainly isn't selective at the plate, but I'm wondering about a larger trend.

When you ask people who work in baseball what makes a good framing catcher (which I’ve been doing a lot lately), good eyesight and pitch recognition tend to be pretty far down the list. But I have heard those qualities mentioned, so it’s not just jdeich wondering whether the same skills can serve catchers well both at the plate and behind it.

We can check! Over the past five seasons, 86 catchers have caught at least 1000 pitches and made at least 500 plate appearances. The top 20 framers of those 86, in terms of the ratio between out-of-zone strikes and in-zone balls, have an average career walk-to-strikeout ratio of 0.501. The bottom 20 framers have an average career BB/K of 0.480. The correlation between OZoneStrike/ZoneBall ratio and BB/K is a weak 0.11, and the correlation between OZoneStrike/ZoneBall ratio and contact rate is an even weaker 0.07. Framing standouts Jose Molina and Jonathan Lucroy have below-average BB/Ks.

It probably shouldn’t be surprising that the connection is so tenuous. BB/K ratio and contact rate are themselves imperfect proxies for pitch recognition and, as jdeich acknowledges, catchers have a much better idea than batters of where a pitch will end up. Presumably, a catcher could be bad at picking up a pitch when he’s at the plate and doesn’t know what’s coming, and perfectly fine at tracking a pitch that he calls for himself from a pitcher whose stuff he’s seen often. Knowing what velocity, movement, and approximate location to expect removes a lot of the guesswork from receiving, allowing other attributes—body movement, glove placement, angle relative to the umpire, etc.—to take precedence in distinguishing the good framers from the bad.

Starting this week, in addition to monitoring Jose Molina, I’ll be keeping a running tally of the 10 top and bottom backstops in terms of OZoneStrike/ZoneBall ratio and total runs saved (subtracting 0.13 runs for every ball in the zone and adding 0.13 runs for every strike outside the zone). Let’s start with the two top 10 lists through Wednesday’s games. And keep in mind: it’s early.

Another solid-but-unspectacular week from Molina, who ranks 11th in runs saved. We’ve yet to see him rack up the kind of runs saved totals he had last season, but there’s plenty of time. Here are his three best frames since last week, with some commentary:

Note how Molina drops to his knee to receive this pitch. Presumably, he’s trying to drop his target for what he knows will be a low breaking ball (and maybe get into a better position to block the ball). One wonders whether he drops the knee only on low breaking balls, and only with the bases empty (since with a runner on second relaying signs, the knee drop could be a giveaway that the curve is coming). One will check before next week.

This time, Molina knows a high pitch is coming, so he adjusts his pre-pitch crouch again. Compare his height off the ground before this pitch to his height on the pitch you’ll see next, a low two-seamer: 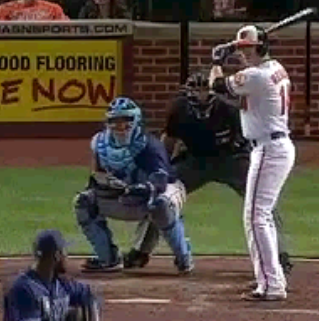 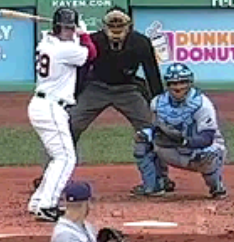 Since Molina is higher to start with, he doesn’t have to raise his glove to the ball as much as he would have otherwise. That makes the pitch's elevation a little less obvious, and Molina comes away with the call.

Nava was not happy.

So that’s two low pitches, and one high pitch. As discussed last week, Molina is a multi-purpose framer, not a Mauer/Lucroy-like specialist: he’s adept at presenting pitches as strikes no matter what border of the strike zone they approach. And given how he adjusts his setup prior to each pitch, it’s not hard to see why.

Best Frames of the Week

Gattis has a wide stance, which makes him more stable, and he hardly moves as the pitch makes its way to the plate. He looks the part of a solid receiver.

Brantly stays very still here, too. He’s on the bottom 10 list above, but he could work his way off with more frames like that.

Kratz was fourth on last week’s list of the best low-pitch framers. He was also fifth on the list of high-pitch framers. Kratz is a good defensive catcher (who hasn't hit at all through his first 50 plate appearances).

It’s hard to tell, since Halladay’s upper body is blocking the plate, but this one was outside. Pierre wasn’t pleased, and with good reason: he was the batter for the past week’s best, second-best, and sixth-best frames. Poor Juan Pierre.

Worst Frames of the Week

The bulk of Ellis’ body doesn’t move much while the pitch is in flight, but seemingly on every pitch, he initially lowers his glove, then brings it back up, which has to distract the umpire. He also catches this one awkwardly, rolling the glove over instead of just shifting it toward the inside part of the plate without changing its orientation. Greinke didn’t miss the target by that much.

Suzuki is a stabber. Detwiler missed the target, but Suzuki seemed slow to react, snapping the glove out to intercept the pitch at the last second. That’s not a great way to get calls.

Not the worst technique; maybe a bit too much movement, or maybe the umpire’s view was blocked by Norris’ shoulder.

Ellis again. Once more, we see the lowering and raising of the glove, followed by a stab at a pitch that didn’t miss its target by as much as Ellis made it appear.

Well, this is embarrassing. After all my compliments about Lucroy, he ends up with the worst frame of the week. But this one isn’t as much about poor framing technique as it is a lack of intent to frame: Lucroy was more concerned with checking the runner back to first than he was with getting the call. It didn’t help that Vogelsong was almost on one knee himself.

You need to be logged in to comment. Login or Subscribe
huztlers
This feature illustrates how inaccurate K-Zone is.
Reply to huztlers
bornyank1
It can be.
Reply to bornyank1
hortonjr
Yes, on many of them the K zone indicates a strike when your info says otherwise.

It's also interesting how inaccurate the "naked eye" can be. Some of the examples that are off the plate look like strikes to me. I guess that shows how hard it is to see where the ball actually crosses the plate looking through a two dimensional TV lens.

Keep up the good work!

I know little about it, but it seems clear that it's not adjusted batter-to-batter individual strike-zones, it seems poorly calibrated from game to game, and it's not three dimensional.As you've said before, variations of an inch or two are huge.

I'd love to see an in-depth examination of digital/laser strike-zoning.

And thanks for the Gattis mention. The legend grows.
Reply to pobothecat
bornyank1
Click the link in my comment above.
Reply to bornyank1
geer08
You guys are doing great things with the GIFs...this stuff is outstanding.
Reply to geer08
chabels
Hopefully Gattis' wide stance won't get him into trouble when the Braves visit MSP.
Reply to chabels
kddean
I am not some AJ Ellis apologist, but I didn't see that either of those were his fault.
For the Greinke one, he set up outside, the ball came inside. For the Kershaw one, Kershaw missed to the exact opposite side of were Ellis was set up.

I understand what you're saying about stabbing, but what way was Ellis supposed to get to those pitches that were pitched to the opposite side of were he was set up?
Reply to kddean
kddean
nice proof-reading.

holy crap I did it twice #dontwant
Reply to kddean
Schere
How has Wieters ranked in years past? I'm surprised that you find his name surprising.
Reply to Schere
bornyank1
He's been pretty good. Not elite, but above average.
Reply to bornyank1
KerryHofmeister
This continues to be my favorite article of the week.

One thing that strikes me about Lucroy is how many pitches that he has "lost" inside the strike zone. Sure, he more than makes up for by by "winning" pitches outside the zone, but it seems counter intuitive that he would be the best receiver outside of the zone while being a seemingly average receiver inside the zone.
Reply to KerryHofmeister
Scooter1027
To add to your point about catcher pairs on the same team being good at framing...#1 on the ratio list, Carlos Corporan, was a Brewer farmhand after being their 12th round pick in 2003. He was in the Milwaukee organization until '09. So that makes the top 3 on that list (Corporan, Lucroy, Maldonado) all guys who spent the bulk (if not all) of their careers in the Brewers org. Again, as you said, it doesn't prove that they somehow emphasize it more than others, but it is interesting.
Reply to Scooter1027
markpadden
A big part of framing is making some kind of effort to hold the ball after the catch and allow the ump time to make a (presumably difficult) decision. Norris' "effort" is terrible (above); he's already started to throw the ball back to the pitcher before the ump even has a chance to make a strike call.
Reply to markpadden
mnsportsguy1
I keep reading these articles about framing and all that comes to mind is that wouldn't it be much easier to frame and gain strikes for a pitching staff with good command? I mean if you call for an inside fastball but it ends up 4 inches off the outside, there is no way you can frame it regardless of how well you frame. Were if you are catching a staff with good command that hits your glove time after time, you would have a lot more opportunities to gain some strikes.
Reply to mnsportsguy1