Four pitchers that made their first MLB starts—or debuted—in 2013 have stayed in their teams’ rotations to make at least one more. These pitchers have combined for 10 starts, covering 55 1/3 innings while yielding 52 strikeouts and just 11 walks—and providing 866 tracked pitches along the way. Impressive.

Fastball, sinker, changeup, and a “good” slurve (more of a curveball, hence the name): 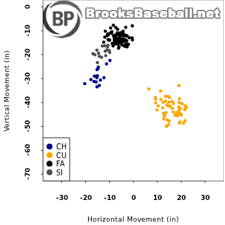 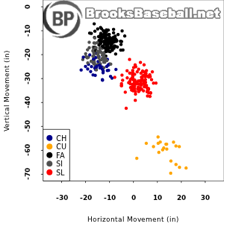 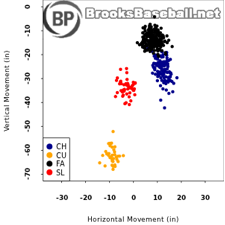 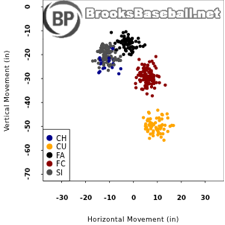 Tepesch's cutter could/should be labeled slider, so we'll group it with the sliders when discussed below.

The experienced and older Ryu has carried a heavier load than his more-youthful fellow rookies. Fernandez and Ryu are clearly the best strikeout pitchers in this group.

Tepesch has shown tremendous balance in his pitch selection, throwing more sinkers than anyone in the group, yet none of his pitches have cracked the 30 percent barrier. Tepesch has thrown 50 percent breaking balls, while Maurer has used spin on 41 percent of his offerings. Fernandez has mostly stuck with his hard stuff; his 63 percent rate is at least 12 percentage points ahead of the rest.

Fernandez throws the hardest, which should come as no surprise. Tepesch and Fernandez have the smallest gap between their fastballs and curveballs. Ryu's 10-mph gap to his changeup (average to average) is the largest of the group. As we saw above, Ryu also throws more changeups than the other pitchers.

Let's talk spin. To compare a lefty with three righties, I'm trying a new way of showing spin. This scale adjusts spin to be (a) relative to “pure backspin” and (b) in the same direction for pitchers of either handedness. The scale is 180, plus and minus to differentiate direction of pitch movement (arm- or glove-side).

Tepesch's four-seamer is the straightest of the group, while Maurer has the most tail. Tepesch closes the gap with his sinker but still lags behind Maurer. The difference between the fastball and sinker is most pronounced for Tepesch, and this was reflected in the gap between the two clusters in his first graph above.

The sliders and curves are both similar. Ryu has the deepest of the three conventional curveballs, with Fernandez showing a pitch that spins somewhere between the sliders and the curves. It's a little closer to the curves, and the 20-year-old Marlin calls it a curveball. Fernandez also throws the changeup with the most action on it. This is reflected in the movement chart above, where his change shows more drop (depth, sink, tail, you name it) than the others’.

Fernandez has the best stuff, but Ryu has an impressive kit as well. Tepesch looks less appealing, but has a nice differential between his sinker and fastball, which could be useful if he can command both simultaneously. Maurer looks very good, but his curveball appears to be inconsistent, and his reliance on breaking pitches may alarm some observers.

You need to be logged in to comment. Login or Subscribe
majnun
This is very cool
Reply to majnun
Shankly
Wow. Great stuff. I love the pitching stuff at BP but never quite know the best and most relevant things to focus on when I look at the cards.
Reply to Shankly
jimcal
I only watched Maurer pitched against Texas in person, which happened to be the only decent game he pitched. With the #SSS, we can see his slider wasn't working until last Sunday against Rangers.

Maurer's deep arsenal helped him get to two strikes easily. But when he needed that slider, sometimes he hung it on outside (there are ones out of zone but got hammered.) He got eight swinging strikes on sliders this year, all of them happen in the Rangers game. 14 of 19 Maurer's strikeout pitch are from slider, a pitch which still result into .450 BABIP. Let alone other breaking ball with crazy outcomes .600 BABIP for (curve ball and changeup.)

Maurer's breaking ball will be critical going forward, hence it's expected that he would use his next couple starts stabilizing curve and changup by pitching backwards, then use fastball w/ movement or slider to put out hitters.

Given time, I wouldn't expect less from Maurer than Ryu.
Reply to jimcal