In case you missed Albert Pujols getting thrown out at first to end the game last night, don't worry, it's not too late to catch him running the final few yards.

Haha. That was a joke. Hahaha. A joke about time, and how small differences in time can seem much bigger relative to the situation. In fact, Pujols reached first base long, long ago, just a second or so later than Mike Trout would have finished had he hit the same ball at the same time. But seriously, Albert Pujols is in a lot of pain right now because of plantar faciitis, and his recovery from knee surgery, and what his manager refers to collectively as "some stuff in his lower body." Because of that, he's having a hard time running to first base. It's hard to watch, because you can imagine how much pain he's in, and yet it bears watching closely because you have to wonder how long he can hold this together, and whether he'll play more than a dozen more games at first base this year, and what either situation might mean for the Angels.

So this is The Week In Albert Pujols Playing Through Pain, the first part in a series that is unlikely to have a second part. For reference, as of two years ago Albert Pujols could run from home to first in a time somewhere between 4.5 and 4.7 seconds. (See him trying to beat out double plays here and here to see where I got those times.) In the past week, Pujols hit 11 groundballs in the infield. He did not have any times to first between 4.5 and 4.7 seconds.

That's the last play of last night's game, when Pujols was up with two outs in the ninth representing the tying run. He hit the ball to the third baseman and was thrown out by the shortstop, so you have an idea of how that went. Here's the visual:

and the down-the-line shot:

5.11 seconds is very slow. About a half-second slower than David Ortiz, for instance (though Ortiz bats left-handed). He takes a long time to get going; and, once he does, you can see, or at least imagine, his legs starting to stiffen up and break down toward the end. This is not happy watching, unless you think the world has gotten too fast and you wish we could all just slow down.

Slowest time: All of the time until the earth burns up

You can see Pujols standing at home plate while Matt Dominguez fields it; he never got out of the box. It's not immediately clear what's happening — the ball wasn't as close to being foul as it might look in this GIF, so it's not that he was fooled on fair/foul. He turned to the home-plate umpire afterward as though he was arguing that it hit off his foot. But Mike Scioscia said it wasn't that, but that Pujols felt his knee catch on the swing. And if you watch his front leg, it does wobble awkwardly. The crowd booed.

Average time (excluding the infinite time on the grounder above): 5.89 seconds

And here's a log of each, including a shot of how close he got to first base on each play. 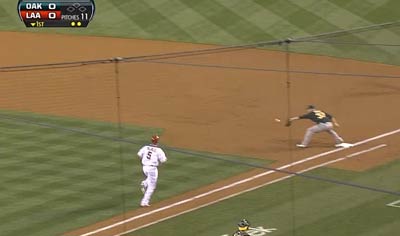 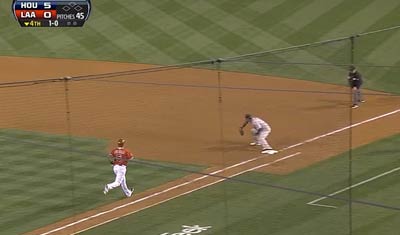 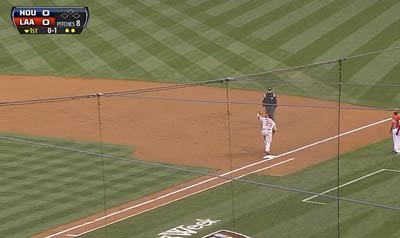 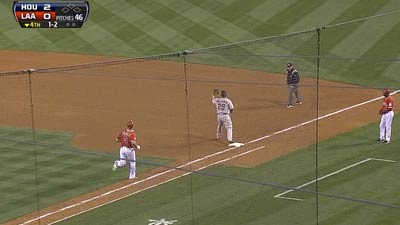 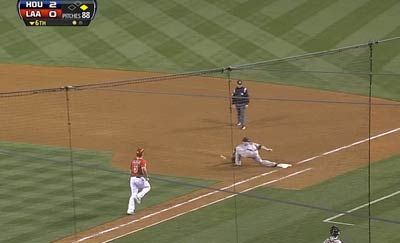 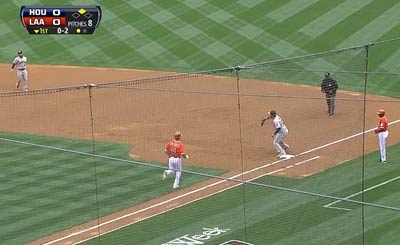 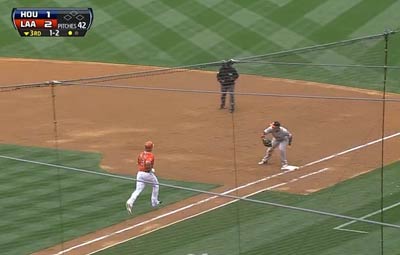 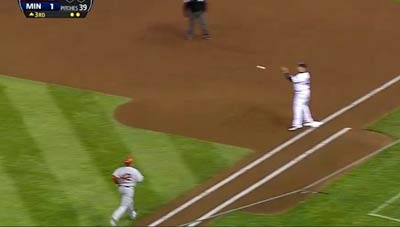 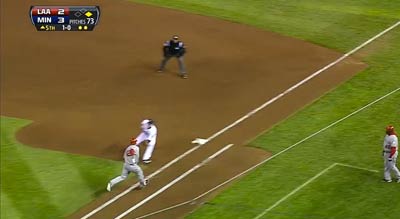 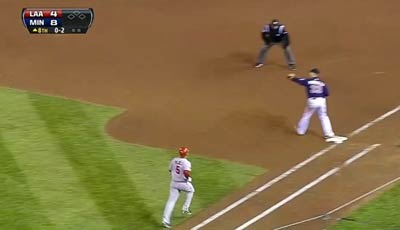 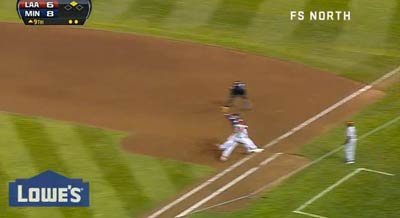 This article, incidentally, has the headline "Albert Pujols won't let sore foot slow him down."

“I’ve had it for the last seven years; is that a problem?” Pujols said of the condition, which causes inflammation of the thick tissue on the bottom of the foot and can be very painful when it flares up. “It’s one of those things that comes and goes.”

*note: all times are based on my unprofessional measurements.

You need to be logged in to comment. Login or Subscribe
wescx22
In an infinite universe, not only did Albert Pujols eventually reach first base, but he reached it an infinite number of times.

That thought experiment monkey probably finished randomly typing the complete works of William Shakespeare first though.
Reply to wescx22
chabels
"It was the best of times, it was the blurst of times. Stupid monkey!"
Reply to chabels
onegameref
Hit more fly balls Albert. That should help. It's always cool to trot around the bases nice and slow. You can even jog a triple into a double once in a while. Just think...only what another 8 years to go after this season. I'm sure the years will fly by with all the love you will get from the dedicated Halo Honks.
Reply to onegameref
kenraty
Time for a "Designated Runner"? Even watching him hit is becoming painful.
Reply to kenraty