You could have an intro here, or we could go straight to the sweet and sexy pitches. Nobody pays for the intro (literally, in the case of BP's paywall), so forget the intro. To the pitches!

3. Matt Moore, fastball, against Asdrubal Cabrera, in which Moore eagerly unveils the new slider he's been working on; "guys," he tells everybody before he throws it, "it's such a swell slider, sliding all over the place and real hard like, so I can use it on two strikes and it'll break way out of the zone and batters will swing at it because they don't anticipate how much it's going to slide," upon which Moore proceeds to throw it and everybody tells him that, as far as sliders go, it actually breaks the wrong way, that clearly Moore is doing it wrong, sending Moore into a funk until he figures "ah shucks to it all, I'm going to throw it anyway."

Reviews of this pitch:

"How… in the name of Zeus’ butthole?" —Nicolas Cage as Stanley Goodspeed, from The Rock

"I have an acronym for myself. Know what it is? B.A.D. B.A.D… Balls, Attitude, Direction." —Nicolas Cage as Little Junior Brown, from Kiss of Death

2. Jose Fernandez, fastball, against Lucas Duda, in which Jose Fernandez throws a fastball that is in the catcher's glove before Duda can get a swing off, except literally this is true, rather than a figurative statement meant to convey hyperbole: 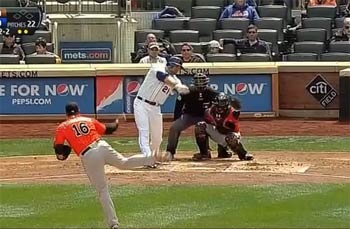 Reviews of this pitch:

"Hey, have you ever been dragged to the sidewalk and beaten till you PISSED… BLOOD!" —Nicolas Cage as Roy Mercer, from Matchstick Men

"That was the plan. To give you a boner. And you got one." —Nicolas Cage as Rick Santoro, from Snake Eyes

1. Every pitch thrown against Brett Wallace thus far this year, in which pitchers, as a group, have made us question what we know about the delicate balance between offense and defense by so utterly dominating one very qualified major-league hitter over the course of an entire week, striking him out 17 times in 22 plate appearances, a rate that puts Kerry Wood's 20-strikeout game to shame, and a rate that has been carried out over a full (min. 20 PA) season by only two hitters in the history of the game (the pitcher Rick Vandenhurk, who struck out 17 times in 22 plate appearances, and the pitcher Bob Lee, who struck out 19 times in 24 plate appearances); the cumulative effect of which leaves open the question of whether the following 14 pitches are good pitches or whether they are merely bad swings, with the exception of the pitch that Yu Darvish throws (directly below) which carries no ambiguity whatsoever and which follows the jarring and propulsive geography of a young child's penmanship.

Reviews of these 14 pitches:

"On any other day, that might seem strange." —Nicolas Cage as Cameron Poe, from Con-Air

"I have always found something in life worth singing about and for that I cannot apologize." —Nicolas Cage as Captain Antonio Corelli, from Captain Corelli's Mandolin

"The best drug in the world. For days, sometimes weeks afterwards, you walk the streets, making infinite whatever you see. Once, for a few weeks, I couldn't feel the earth – everything I touched became lighter. Horns played in my shoes. Flowers fell from my pockets. You wonder if you've become immortal. God has passed through you. Why deny it, that for a moment there – why deny that for a moment there, God was you?" —Nicolas Cage as Frank Pierce, from Bringing Out The Dead

You need to be logged in to comment. Login or Subscribe
holgado
I'd like to nominate another pitch: the one Zack Greinke threw to Carlos Quentin last night. In retrospect (and I recognize how inappropriate a sentiment this is, but it captures my anger), I only wish he had thrown it higher and tighter. Quentin broke the man's collarbone in the brawl that ensued and that CQ unnecessarily instigated.

According to the San Diego Tribune, Quentin claimed he would not have charged the mound if it weren't for what Greinke said to him right after the pitch. Of course, he did not elaborate on what Greinke said. And he also probably did not realize that the game cameras caught that angle completely, and revealed that all Zack said was a single word, in response to Quentin's initial, unwarranted stare-down. That word was "stop." Didn't need the great Evan Brunell's lip reading skills to decipher that one (nor for Matt Kemp's repeated "that was fertilizer," for that matter).

I know it won't happen, but I agree with Don Mattingly's suggestion that Quentin should not be allowed to play again until Greinke is healed. Alternatively, my advice for him is the same as the advice that Shoeless Joe gave to Moonlight Graham: "watch out for in your ear."

Oh, and Cage's review of the pitch has to be Santoro again from Snake Eyes: "I guess they don't call you the executioner for nothing! And you sign my kid's autograph!"
Reply to holgado
holgado
Go ahead and minus me, I probably deserve it, but I'm not nearly finished on this.

If C.Q. doesn't get a lengthy suspension, then I don't see how the Dodgers can stand for it without retribution. Quentin is a well-known "leaner" (as Mitch Williams called it) who gets hit on a per-plate-appearance basis more than any other active hitter (and it's not particularly close, check it out: http://www.baseball-reference.com/leaders/HBP_top_ten.shtml... once every 20 plate appearances last year!). And this isn't bad luck. The guy gets hit in the same damn place most of the time (the hands that he refuses to move out of the way) and by all manner of pitchers. And on top of that, he's got 50 lbs. on Greinke and is well aware of the damage he can cause someone just on a straight F=ma basis.

Understand that I am a peace, love and understanding kind of guy. Kind that votes for Howard Dean and watches a lot of Aaron Sorkin. And if *I'm* saying this, just imagine how the entire Dodgers clubhouse feels right now.

In your ear, pal.
Reply to holgado
LlarryA
Suspension length when injury is involved is a tricky thing that all sports leagues have struggled with. I just don't know how long Bud can realistically give. If he goes "too far" (whatever that might mean) there may be a grievance filed by the Players' Association. That of course, would be silly in that they'd be supporting Quentin, but not Greinke, but that's how various PAs have dealt with this kind of thing in the past...

Besides that though, CQ could stand a bit of an attitude adjustment on this. If he's going to make a living leaning in, he's got to accept getting hit. I can't imagine Ron Hunt or Craig Biggio acting that way. (I can imagine Don Baylor getting mad, but I think it would take a lot more direct provocation.)
Reply to LlarryA
holgado
Good points all. And I know that an 8-week (~50 game) suspension would be unheard of for what could be considered -- at some level of abstraction, at least -- an ordinary, run of the mill mound-charging.
Reply to holgado
wendtm
Is there something wrong with the gif of Moore's pitch, or did it just bend time and space? Because it looks like it jumps into the catcher's glove. And that wouldn't be fair.

Oh, and Carlos Quentin is a pussy douchebag.
Reply to wendtm
bsaraceno
This made me laugh so hard. Thanks Sam.
Reply to bsaraceno
Klochner
Sam, you should give Vampire's Kiss a spin sometime. It features some of the highest quality Cage freakouts.
Reply to Klochner
Manprin
Unfortunately the only movie worth seeing involving Nicolas Cage is 'Valley Girl'. Everything else is just...awful.
Reply to Manprin
MFBabyFeets
Raising Arizona?
Reply to MFBabyFeets
holgado
Adaptation.
Reply to holgado
holgado
And what MFBabyFeets (can't believe I just typed that) said.
Reply to holgado
kozysnacker
NO MORE DRUGS FOR THAT MAN
Reply to kozysnacker
penski
Leaving Las Vegas
Reply to penski
Dodger300
Academy Award, and Elizabeth Shue!
Reply to Dodger300
Manprin
Oh, please. You are making Robert Ebert spin in his grave.
Reply to Manprin
smallflowers
Wild at Heart
Reply to smallflowers
handyarrow
"Wild At Heart"?!
Reply to handyarrow
jnossal
Fast Times at Ridgemont High.
Reply to jnossal
aquavator44
The most Cage-ian performance of his career has to be in "Bad Lieutenant: Port of Call New Orleans."
Reply to aquavator44
sportspopery
He plays himself, and it's glorious. Honestly, the majority of the pitches Wallace struck out on were filth of the sort that the Moral Majority warned us against. He got the short end of a pear-shaped stick.
Reply to sportspopery
brownsugar
I count four different jerseys in the Wallace montage. Just how many alternate jerseys does a team need? Maybe one of Sky's 32 questions should have been # of Astro jerseys vs. # of Astro wins.
Reply to brownsugar
marcello
Poor Brett Wallace.
Reply to marcello
jfranco77
No quotes from "Stolen" --- invalid! That was also a very Cage-ian performance.
Reply to jfranco77
Dbessette
Think I know what the Rangers game plan for him was! Which is funny because after looking awful on inside (and down) breaking balls, then he goes looking awful on high fbs and then to add good measure a change against Seattle. Not a good start Brett Wallace.

That slider by Darvish is pretty exceptional in the top left gif.
Reply to Dbessette