Tuesday, like the night before it, featured an unusual sequence of called strikes. The weirdness happened during the ninth inning of the Brewers-Cubs game. Newly appointed Chicago closer Kyuji Fujikawa started his shift against Milwaukee outfielder Logan Schafer. After missing high with a fastball to begin the at-bat, Fujikawa recovered to throw three consecutive fastballs for called strikes en route to a leadoff strikeout. If only it were that simple.

Fujikawa did throw three consecutive called strikes and did notch the K, but he did so in an odd manner. On each of the pitches Fujikawa missed his target by a considerable amount. Don't take my word for it, here are stills from the first two strikes that show the target and the location: 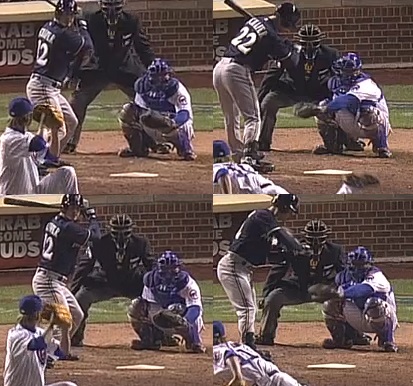 In both instances catcher Welington Castillo sets up for a pitch down and away, and in both instances Castillo must stab back across the plate to catch the ball. Yet home-plate umpire Alan Porter called each pitch a strike. Fujikawa, sensing a challenge, took things a step further on the two-strike offering. On this pitch Castillo rode the elevator to the top of his crouch and set his mitt up across from Schafer's letters. By the time Castillo secured the pitch, however, he was back down in normal position and his mitt was across from Schafer's knees. Strike three:

What makes this a notable sequence of called strikes is that you can view Porter as being 100 percent correct or incorrect depending on your point of view: Either he did his job well by focusing on the ball's location as it crossed the plate, or he did his job poorly by rewarding poor command and poor presentation. It's up to you. Just know that those who followed along through GameDay thought he did a marvelous job:

You need to be logged in to comment. Login or Subscribe
philly604
No, I don't believe there is any credible way to think that Porter did anything less than a great job in poor context.

Love the framer, but hate the ump who simply calls strikes correctly? Please let's not go down that path.
Reply to philly604
RJAnderson
I did a poor job of communicating if you took this as "hate the ump." I don't hate the ump and I think he made the right calls. I was caught off guard by the calls at the time, however, because we've all seen pitchers not get calls based on wildness within the zone and/or poor presentation. I'm not judging those umpires, either, by the way.
Reply to RJAnderson
derflotr
Yeah. I was the seething post-bullpen-collapse Brewers fan looking for anything to get frothy about, but I couldn't help but be mildly impressed with the umpire getting all three of those calls right.
Reply to derflotr
mblthd
This isn't germane to the Fujikawa game described herein, but just a general strike zone question...

What is the top side of the strike zone? The batter's armpits? The top of his stomach?
Reply to mblthd
kmbart
From the official rules of MLB:

The STRIKE ZONE is that area over home plate the upper limit of which is a horizontal line at the midpoint between the top of the shoulders and the top of the uniform pants, and the lower level is a line at the hollow beneath the kneecap. The Strike Zone shall be determined from the batterâ€™s stance as the batter is prepared to swing at a pitched ball.

Reply to kmbart
dfloren1
I suppose there's another strike zone rule barring hitters from shrinking the zone simply by pushing their pants down about a foot. Basically "pants on the ground." With pants on the ground, the top edge of the zone would be lowered by half a foot. But I wonder if whatever rule that bars pants on the ground is unwritten (i.e., it would hinder them getting down the line and taking extra bases. That, or the rules governing dress would bar them from "pants on the ground." Lookin' like a fool with your pants on the ground. http://www.youtube.com/watch?feature=player_embedded&v=tMwhl4IrPNc#!
Reply to dfloren1
mblthd
Doesn't it seem like that the umpires don't go with that definition? For example, in the top left photo above, the top of Castillo's helmet appears to be right on the line described in the official rules. But if a pitch were to cross the plate at that height, everyone would be stunned if the umpire called it a strike.
Reply to mblthd
noonan
This brings up a key question that is part of Mike Fast's framing study. Can we really judge how close a pitcher came to hitting his spot based on the final location of the pitch? Without knowing where the catcher's mitt is, we have no idea if framing occurred.
Reply to noonan
mblthd
I don't know why I think this, but I think Fujikawa's theme song (or whatever you call the music they play when he comes into the game from the bullpen) should be "Bodhisattva" by Steely Dan. Maybe it's because his name is 4 syllables with the stress (at least in the Americanized pronunciation) on the 3rd syllable, and the 2nd syllable is an "ee" sound and the 4th syllable is an "ah" sound?