I was watching the end of Monday night’s Giants-Rockies game, savoring the last few outs of live baseball before the scoreboard went blank for another night, when I saw this swing: 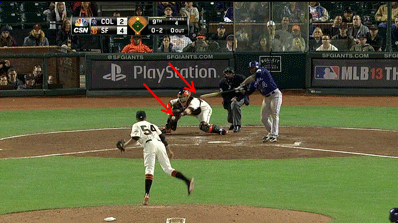 That pitch, an 80-mph slider from Sergio Romo (who struck out the side), started out outside and moved almost eight inches outsider. It crossed the plate—well, where the plate would have been—2.85 feet from center. There’s the bat, there’s the ball, and then there’s the roughly home plate-sized gulf between them.

Chris Nelson, who was responsible for the swing, isn’t even a particularly undisciplined swinger; among the 290 hitters who saw at least 1000 pitches last season, his chase rate ranked 159th. But that swing—well, check swing, since he at least had the presence of mind to try to stop it—was as undisciplined as they come. Even Jeff Francoeur has never swung (not just swung and missed, but swung) at a pitch within 3.5 inches of that.

Then again, Jeff Francoeur has faced Romo only four times, and no times since 2010. If Romo had thrown him that pitch, Francoeur might have swung at it, because Romo specializes in making batters look silly.

The original plan for this post was to look up all the Romo sliders that got swings and misses and were at least as far outside as the one to Nelson. But when I looked, I discovered that there weren’t any, which put an end to that plan. Romo has thrown only four (non-pitchout, non-intentional-ball) pitches farther outside than that, and all of them were balls. That was the farthest outside he’s ever thrown a pitch and convinced a batter to swing.

So instead, I looked up pitches by anyone that were farther outside than Romo's slider to Nelson, got swings and misses, and weren’t the result of a hitter trying to protect a runner in motion. There were three for which we have video. Here they are, in ascending order of outsideness:

It's never a good sign when you swing at a pitch that the catcher, who's already expecting an outside pitch, can't catch.

It's never a good sign when you're Garrett Jones and you're facing a lefty.

It's never a good sign when you're Gaby Sanchez, just in general.

And one bonus way-outside swing, because it’s barely any closer to the plate than Romo’s slider to Nelson, and because no list of this sort is complete without Vlad:

While I was writing this post, I got a related question from Effectively Wild listener Aaron Franklin, also inspired (I assume) by Romo’s slider to Nelson. It was intended for tomorrow’s listener email episode, but it’s not really a question one can answer off the top of one’s head while recording a podcast, so I’ll answer it now instead.

I am frequently in awe of how often batters swing at Sergio Romo's slider when it isn't even close to going over the plate; is there any feasible way to rank major league pitchers by who induces the most absurd chases? I'm thinking of pitches thrown far outside the strike zone which still create swing-throughs.

There is a feasible way! I took all pitches that resulted in swinging strikes and were at least two feet outside to a right-handed batter, then removed the ones that looked like hit-and-runs. That left 518 pitches. Then I counted how many times particular pitchers appeared on the list. Here are the five pitchers who appeared more than 10 times:

Not surprisingly, they’re all low-arm-slot righties with sweeping sliders. Interestingly, Moylan and Masterson have massive platoon splits, while Romo and Smith have almost none. (Camp’s is kind of in the middle.)

I went through the same process in reverse for lefties, ending up with 398 pitches and the following six pitchers who showed up more than five times:

Now we have mostly low-arm-slot lefties with sweeping sliders. And we also have…Dan Haren, a right-handed starter who doesn’t throw a slider. Haren got all of his far-outside swings on hard stuff from 2008-2010, so this seems like a skill that hasn't survived his velocity loss.

You need to be logged in to comment. Login or Subscribe
cchisam
Excellent article Ben, I always enjoyed watching Vlad try to hit a pitch either over his head or 3 feet in front of the plate!
Reply to cchisam
redsoxin2004
Watching Vlad makes me wonder what was the farthest pitch (in, out, high and low) that someone managed to actually get a hit or HR. If I had to guess, Vlad is going to be high on that list.
Reply to redsoxin2004
bornyank1
I'll take a look in a little while.
Reply to bornyank1
bornyank1
Well, it probably wasn't what you had in mind, but here's the farthest outside hit I could find (and access video for).

The announcer said, "He hit that ball 70 feet from home plate." Almost!
Reply to bornyank1
kozysnacker
It's gotta be Miggy's "IBB single"

http://www.tunesbaby.com/watch/?x=1648147
Reply to kozysnacker
harderj
And after watching Joe Nathan notch his 300th career save last night there might be a candidate for furthest pitch outside called a strike (at least to hear the commentators on MLB Network go on about it).
Reply to harderj
bornyank1
I just wrote about that, too.
Reply to bornyank1
harderj
Yes, thanks for that article! Pitch #1, an outside called strike, wasn't that far from the final one, at least according to the graph.
Reply to harderj