Remember the process/outcome matrix from Winning Decisions that Paul DePodesta once posted on his blog? 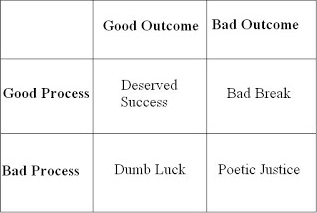 Here’s Jose Fernandez’s process, according to the PITCHf/x data from his first career start. The right-most column indicates where each value would have ranked among starting pitchers who threw at least 200 pitches of each given type in 2012. (Note: Fernandez may throw even harder when the weather is warm.)

And here’s the outcome:

Speaking of winning decisions, Fernandez didn’t get one, both because pitcher wins are a silly stat and because Steve Cishek blew a lead and lost the game. So if we were to put his first start in the process/outcome box, we would have to put it here: 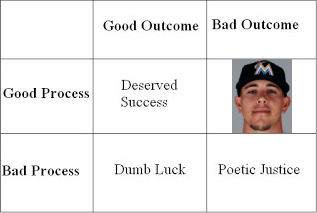 But gosh, did the process look good.

It was one start, and it was against the Mets. Fernandez is 20 years old, and he’s going to struggle sometimes. But if  he keeps pitching like that, we’re going to have to prepare for a lot of this: 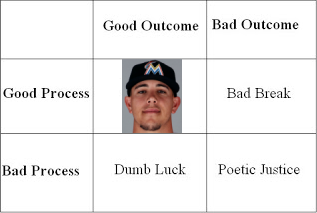 You need to be logged in to comment. Login or Subscribe
holgado
Great stuff. We could have a lot of fun with photos of pitchers for that bottom right hand corner box.

Also, I totally agree with your and Sam's speculation on today's podcast that -- the readiness Fernandez exhibited in this first start aside -- his early promotion is essentially a costless way for Loria & Co. to create something they can point to as supposed proof that they're not all about the bottom line. It's costless because -- if the past is prologue, at least -- they'll be trading him away before his final arbitration year (let alone his first free agent year) anyway, and thus won't be footing the bill for having started the clock now instead of 2014. (And of course, like one or both of you suggested, whether it's Eovaldi's and Alvarez's return from the DL or something else, they may still find a reason to demote him for just long enough to prevent him from obtaining Super 2 status.)

And as for the Marlins' past history of delaying call-ups for service time considerations, I think Giancarlo Stanton is a very fair precedent to cite. I'm not sure that Miguel Cabrera belongs in the same category, though. If I recall correctly, Miggy was not only just 20 at the time of his promotion, but he somewhat unexpectedly skipped over AAA, and had less than a half-season of at-bats at AA, when the call came. On top of that, he had almost exclusively played 3B (and before that, SS) in the minors, yet was plugged in at LF due to the presence of Mike Lowell at third (and, I suppose, due to the presence of a replacement-level Todd Hollandsworth in left). I know he was a highly touted prospect going into that year. I just don't recall having the impression at the time that his call-up was, in any sense, delayed.

Finally, though Loria & Co. might have intended this as an olive branch to the Marlins faithful, it's not a very significant one. It seems as though we have reached a point where gaming a prospect's service time is not even something that draws the ire of a team's fan base. Rather, it's often appreciated as a smart business move that will allow the team to rely that much less on overpaying free agents (e.g., oh, I don't know... Heath Bell?) as a means of improving the big league club. So, as much as Marlins fans are enjoying an early look at Fernandez, they must also be disenchanted with what is yet another example of flawed front office decision-making (again, the only defense to which is to admit an even more disenchanting reality: that they'll be trading the kid away before any of this matters).
Reply to holgado
bornyank1
I wouldn't say it's necessarily costless--even if they do trade him away before he reaches free agency, they'll get less for him if he has less service time remaining, or have to do it a year sooner.
Reply to bornyank1
holgado
Very good point. But you're assuming Loria cares what he gets in return other than payroll relief!
Reply to holgado
Oleoay
The GM at least cares enough to get _something_ back.
Reply to Oleoay
Oleoay
Those grids remind me of the Punnent's squares from genetics... Jose Fernandez is what happens when a good process mates with a bad outcome.
Reply to Oleoay