An error by Marwin “No Perfecto for Yu” González didn't help, but still… the most Astros named pitcher ever may have just had the most Astros 2013 pitching performance ever. Cedeño's final line is a thing of horrific beauty: 0 IP, 1 H, 6 R, 3 ER, 0 HR, 3 BB, 0 K.

It seems like allowing at least six runs without recording an out should be a rare occurrence, but it isn't. Thanks to the magic of Baseball-Reference, we know that this has happened 135 times since 1916, which is as far back as the data goes.

It happened twice in 2012, once in 2011, twice in 2010 (both by current members of the Padres pitching staff, so there's something to look forward to if you're in San Diego), once in 2009… Oh look, it's happened at least once every year since 1995. And because '94 was a strike year, I'll note that the last full season to have no pitcher allow at least six runs in a game without recording an out was 1982.

Borowy is the only pitcher to have allowed nine runs without recording an out, but five men have allowed eight: Bob Kammeyer, Bill Krueger, Bobby Jones (the right-hander from Fresno), Blake Stein, and Paul Wilson, who did it twice:

Wilson's efficiency in that second game is remarkable. Eight runs in 25 pitches? Well, okay, but it's no seven runs in 12 pitches. Terry Adams did that for the Dodgers on May 5, 2001:

Why be patient when you can just get a knock? Adams, it should be noted, finished the season with a 4.33 ERA. Take away that one Saturday afternoon at Wrigley and it's down to 3.95. Instead of finishing 23rd in the NL in ERA, he finishes 18th.

When I said that what Cedeño did last Friday is no big deal, I lied. I'll do that sometimes; it's the nature of telling stories. Thing is, he allowed just one hit. Only five men have surrendered six runs without recording an out while allowing less than two hits:

Weinert is in a class by himself. We'll include him here because that deserves recognition.

You know how the Angels finally recorded an out? The seventh hitter, Steve Hovley, laid down a sacrifice bunt in the first to play for that fifth run. With runners now at second and third, Angels skipper Del Rice had Allen intentionally walk Freddie Patek to get to pitcher Steve Busby, who promptly singled home two runs. The inning finally ended when Schaal grounded into a double play.

To be clear, May was a good pitcher having a good year. That performance raised his ERA to 3.09 on the season. He finished at 2.94, 22nd in the AL (the game was a little different then). Take away his September 20 start and it's 2.67, which would have moved him up to 16th.

Having established the hysterical context of Cedeño's accomplishment, let's turn to how he did it. Houston starter Brad Peacock entered the fifth down 1-0. He started that frame by retiring his eighth straight batter, getting Nate Freiman to pop out to shortstop.

Coco Crisp, who led off the game with a homer that had accounted for the only run to that point, followed with a double down the right-field line. While the A's broadcast kept showing replays of Crisp's double (complete with squeals of delight from a very loud woman near one of the field mics), Astros manager Bo Porter came out and yanked his starter after 89 pitches.

The A's broadcasters expressed some surprise:

Glen Kuiper: So we thought maybe Bo Porter was going to come out and give Brad Peacock a little pep talk, say, “Hey, you're pitching well, get yourself out of this inning, 89 pitches.” But instead, he took him out.

Scott Hatteberg: Hooked him. He was starting to figure some things out, too.

On the Astros feed, you could see that Castro came out to chat with Peacock before trotting back behind home plate. Then Porter came out to yank his starter. Also, you could hear that woman.

The Houston announcers, for their part, didn't seem surprised to see Peacock leave.

Cedeño entered and did this: 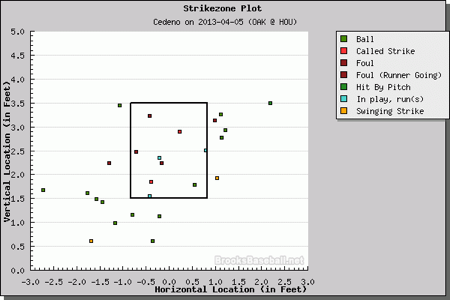 Which probably isn't what Porter had in mind.

Cedeño walked Jed Lowrie on four pitches that missed down and in, and weren't even close. He then walked Josh Reddick on five pitches, including a 1-1 breaking ball in the dirt that doesn't appear in that chart up there. Cedeño may have been distracted by Crisp, who was dancing around off second base during the Reddick at-bat. (Crisp was 14-for-15 on attempts to steal third in 2012 and 39-for-41 going back to 2008 before being caught on Sunday.) Then again, given the previous walk to Lowrie, maybe not.

Hatteberg, bringing the insight: “I don't think this is playing out the way they were hoping. You got the lefty versus Céspedes with the bases loaded.”

Yoenis Céspedes followed with a hot smash (video) that handcuffed shortstop González. As Porter said after the game, “That's a tough error. That ball was hit pretty hard, but if he fields that ball cleanly it's definitely a double play because of the speed the ball is hit.”

Two runs scored on the play and the inning stayed alive, bringing up John Jaso, who dropped down a bunt in front of home plate (video) on the first pitch. Catcher Jason Castro pounced out to field the ball, leaving a clear path for Reddick, who slid behind a scrambling Castro to make the score 4-0. Hatteberg, on Castro being caught in no-man's land, unable to tag Reddick: “That's a hollow feeling right there, seeing the beard drift away from you.”

The Astros feed includes a replay from an angle that shows Castro could have thrown to first and gotten Jaso by, oh, 30 feet. But that's easy for me to say.

Chris Young followed with a 10-pitch walk. This was Cedeño's best effort, with half of his 12 strikes coming here. Even then, he got help, as Young fouled off a 3-1 slider that was well off the plate inside. After that, Young kept battling until he saw a pitch low enough to let pass.

With the bases reloaded, right-handed-hitting Josh Donaldson stepped to the plate. Rhiner Cruz was warming up in the Houston bullpen, which the A's broadcasters noted:

Kuiper: Cruz has been warming up for a while, and he is a right-hander, and he certainly looks to be ready to go… but it doesn't look like Bo Porter's going to bring him in.

Hatteberg: Well, I hate to second-guess guys, but I think I might have gone ahead and made a change here.

Donaldson whacked Cedeño's first pitch to right, driving home two. Jaso ran through Mike Gallego's stop sign, but first baseman Brett Wallace cut off Rick Ankiel's throw (video), so the play at the plate never materialized. Said Astros color commentator Alan Ashby, a former big-league catcher: “That was a mistake right there, in my estimation, to have this ball cut. If that ball comes in from Rick Ankiel, they get an out and rather handily at the plate.”

Cedeño then plunked Eric Sogard with a 2-2 fastball to the back. Kuiper: “Could be time to come get Xavier Cedeño.” Which Porter did, to sarcastic applause from the home crowd. Kuiper: “Not a terribly good outing.” Cruz took over and allowed two more runs to score before the inning drew to a close after nearly 45 minutes.

The Astros are proving everyone right so far. They are brutal, but as Ian Miller notes, they are fun. Already in the first week, they have given us a near-perfect game, strikeouts at a ridiculous pace, and Cedeño's historical outing. What will happen next?

This franchise is moving in the right direction, but in the short term it's a tough sell to fans. As a writer, however, I am grateful for the Astros' existence. They are fascinating in every sense of the word.

You need to be logged in to comment. Login or Subscribe
dianagramr
I love this kind of stuff .... great job.
Reply to dianagramr
gyoung858
Thanks, Diane; I'm glad you enjoyed it!
Reply to gyoung858
pjbenedict
This isn't the style of article I normally dig, but I too thought this was pretty interesting. Thanks.
Reply to pjbenedict