On Saturday, one of the most electric young arms in baseball faced one of the best in-his-prime hitters in baseball. Shelby Miller's Cardinals came out of it with a win over Buster Posey's Giants, but the matchups between Posey and Miller were more interesting than just an outcome.

Pre-existing narratives
Posey, the 2012 MVP, received his award before the game Saturday. Willie Mays, Willie McCovey, Jeff Kent, and Kevin Mitchell were in attendance to take part in the ceremony. Posey’s 172 OPS+ led the NL in 2012, and is the second-highest ever for a catcher.

Miller, the 16th-best prospect in baseball, won the fifth spot in the Cardinals rotation in the spring after a dominant late-season stretch in September and the postseason. There are still question marks about him within the organization, though. “There were those in the Cardinals clubhouse who classified him as ‘a pitching Rasmus,’ not a compliment.” In particular, Miller has a reputation for falling in love with his fastball at the expense of his breaking pitches, especially a plus curveball.

Previous history
Posey and Miller matched up twice in the 2012 postseason, when Miller was working out of the Cardinals’ bullpen. In the first appearance, Miller struck Posey out on three pitches, fastballs clocked at 96, 97, and 96: 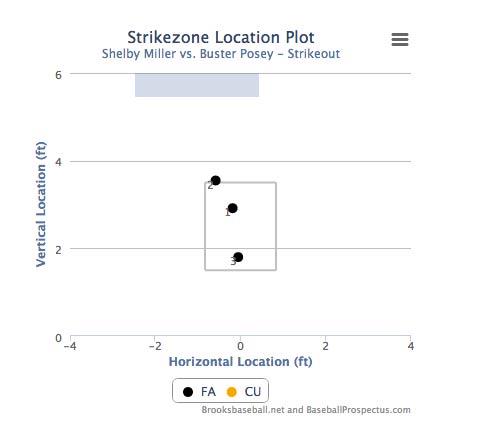 In the second confrontation of the 2012 postseason, Miller jumped ahead with a curveball in the zone, then worked Posey with fastballs up and away until Posey grounded out to shortstop. 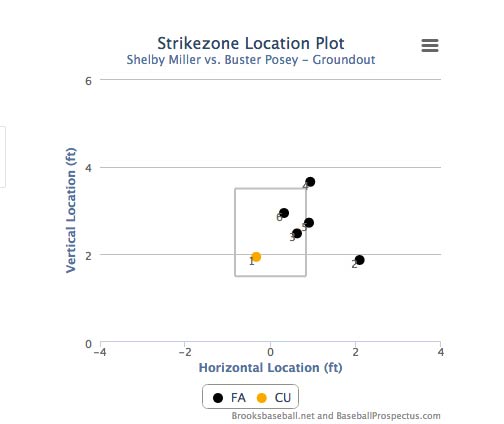 Well, you can certainly appreciate why Miller reportedly leans so heavily on his fastball. Just as he did the first time the two met, Miller struck out Posey, looking, on heat. This time, Posey didn’t even get a swing off.

Miller’s fastballsâ€‹—94, 93, 94, 95—are a bit slower than they were when he faced Posey in the postseason. Of course, that makes sense, as Miller was relieving at the time. But Cardinals fans have been anxious about Miller and velocity, after his fastball slowed last year and briefly showed high-80s/low-90s in the majors. This from a pitcher who used to work mid- to high-90s, with staying power: “Sits in the mid 90s with mechanics that are the definition of free and easy,” Kevin Goldstein wrote in 2010. “Only went deep into game once, but was still sitting at 94 mph in the seventh after throwing 90+ pitches with no signs of fatigue.”

If he’s a tick lower now, it’s still a fantastic pitch, with about as much oomph as he had in his non-postseason relief appearances in 2012. Even at 92 or 93, it looks like a mid-90s heater, according to Jason Parks: “He has excellent extension, so the 92-94 looks more like 94-96; he throws it downhill on a steep plane and it features good late life. The combo makes it a monster pitch that is difficult to square up.”

Which means you can imagine what a true 95 looks like coming from Miller. The on-screen graphic displays 94, but PITCHf/x calls the final pitch 94.95 mph, the hardest ball Shelby Miller will throw all day. The combination of the third and fourth pitch is really nasty: The pitches were thrown from an almost identical release point—there's typically more variation from pitch to pitch than you might realize, but in the case of these two pitches just three-hundredths of an inch differentiated Miller's release point vertically, and one-thousandth of an inch vertically. Pitch 4 started slightly closer to the plate than Pitch 3 did, but it also had about a half-inch more movement toward the plate than Pitch 3 did. That half inch might have made all the difference; we generally measure the outside corner as 10 inches from the center of the plate, and this one was 10.5. Had it been 11, Miller might not have received the call.

Which is just to say that, from Posey's perspective, Miller threw a pitch very, very similar to the pitch that had just been called ball one. But it was harder, and it moved into the strike zone late. Posey moves his hands a bit late, the only time in the at-bat that he even contemplated a swing, but by that point it was too late.

Miller goes back at Posey with a first-pitch fastball that catches a ton of the plate. Posey, seemingly ready for it, is still tardy, though at least he fouls it off. Small victories, says the orange-clad fan on the left,

should be celebrated. Posey hadn't shown he could catch up to the fastball yet, but Yadier Molina went to the curveball anyway and got Posey to buckle slightly. Considering Posey's reaction to the pitch his first time seeing it in the game, you wonder whether Molina should have saved it for two strikes, but then maybe Posey wouldn't have been surprised to see it on two strikes. As it was, Posey was unprepared for it even though it stayed up in the zone. The next two weren't up in the zone, and on Pitch 4 Posey got caught in between on a pitch that was probably a few inches low. 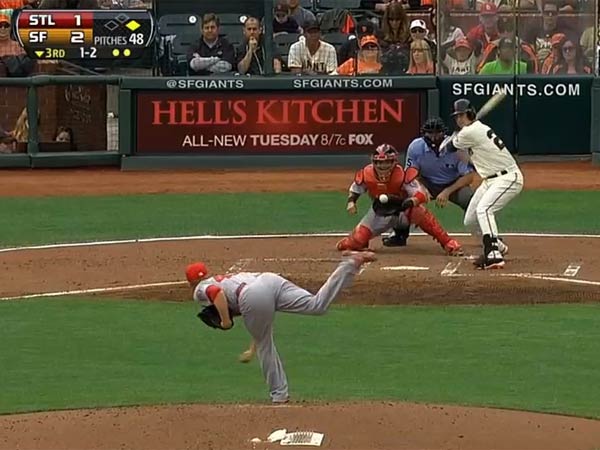 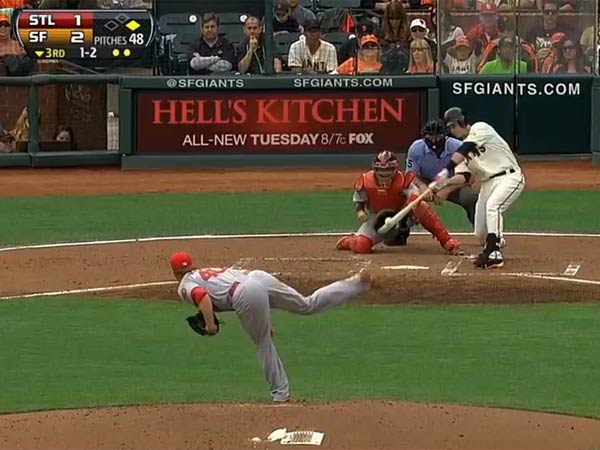 It's a bit amusing that so much was made of Miller's overreliance on his fastball. There are situations where you can imagine that turning into a problem, if he's really stubborn about it. But Miller has basically said he's just going to throw whatever Molina asks for. It's Yadier Molina, after all.

“I’m not going to shake (off the catcher). I’m not going to think too much out there,” Miller said. “I not only trust myself with my pitches. I trust Yadi with what he calls. If I execute my pitches, good things will happen. I’ll go ahead and say it: Most of this year I’m just going to follow him. It makes it easier on me.”

So, to summarize, Miller threw Posey the same outside-inside-outside combo that he got him with in the first, but each pitch was located to be slightly harder to hit or slightly harder to take. The command—watch Molina's glove; no movement on any of the three—is encouraging, as Miller has by this point dropped 1-2 mph with his fastball velocity. That might suggest fatigue, but the command suggests the opposite.

He finally deviated from the first at-bat with a curve, and Posey waited on it much better than he did when he saw the pitch earlier in the game. Posey did what he very often does when he's behind in a two-strike count,

and lined it to right field. But it was an out, and Miller won the third of three battles between the two.

Miller didn't throw a changeup to Posey—he threw only three all day, all to lefties—but he didn't need to, using the breaking ball as a de facto changeup to get Posey on his front foot. It's worth wondering how long Miller could have gone with nothing but fastballs to Posey. There aren't many heaters Posey can't catch up to. But Miller threw eight to Posey, six of them in the zone, and Posey managed to get a swing off on only one of them. That swing produced a pop-up into the right field stands. Posey was either very selective or, for an afternoon, perhaps overmatched.

Here's how Miller's start looked from the Cardinals' clubhouse:

As he did throughout Spring Training, Miller opened the afternoon unafraid to attack with his breaking pitches. He left a few of them up, though, which set up Hunter Pence's second-inning solo homer and the Giants' two-out run in the third. But rather than abandoing[sic] the pitch — something Miller had a tendency of doing when things didn't go right in Triple-A — and, in turn, relying too heavily on his fastball, Miller continued to follow catcher Yadier Molina's lead and throw his curveball.

"That is just the lessons I have to work on in my bullpens," Miller said. "Making sure I get the balls down in those situations and trusting my curveball in those kinds of situations as well, being able to throw it when it's necessary."

And from the Giants' clubhouse:

“He stayed out of the middle of the plate and really worked the corners,” Posey said. “He’s got good stuff.”

You need to be logged in to comment. Login or Subscribe
joshtatum92
He seemed to be hitting most of his locations. Potentially bright future here. One of my favorites.
Reply to joshtatum92
jeffstearns
This was a fantastic piece. It was fun finally watching Based Shelby get to do his thing.
Reply to jeffstearns
APer930
I would love to see more of these articles, pitcher - hitter matchups with gifs of each pitch and analysis. Great article Sam
Reply to APer930
faztradamus
Man that is a pretty delivery.
Reply to faztradamus
UofIx3
The quote about Miller being another Rasmus was from a St. Louis Post-Dispatch column by Joe Strauss, who lives to stir things up, and it referenced Miller's behavior (from earlier in his career) when he didn't take coaching - full article, "'Joe Cool' may be turning into 'Joe Mature'," at http://www.stltoday.com/sports/columns/joe-strauss/strauss-joe-cool-may-be-turning-into-joe-mature/article_5086c058-96cc-5eae-a134-3029ea96fc65.html
Reply to UofIx3