Earlier this week, Jose Bautista said some things about umpires:

Bautista said he had no “statistical evidence” that umpires are tougher on him because of his open disagreements. But he made it clear he believes some umpires do not adhere to the rulebook definition of the strike zone.

“Just because one guy reacts more than the other, then every single time there’s a close pitch it’s a strike? Or are you going to go by the parameters defined by Major League Baseball, what’s a strike and what’s a ball? I’ll let you decide what’s right and what’s wrong on that one. It’s not my place to decide.”

He was asked whether his reactions might make it tougher for him to “get calls” from umpires.

“I don’t want to get calls,” he replied. “I want the right call to be made. And I’m not saying that every time I react a certain way, the call is the way I think about it. No.

“But if seven out of 10, eight out of 10 times that I react, I go back and look at video and I still think I’m right, then there’s something to it. But what can I do? I can’t control it. I can’t change it.”

“Sometimes I have trouble more than other players dealing with my production being affected by somebody else’s mediocrity,” he said. “It’s just the way I am as a person. It’s a tougher pill to swallow for me sometimes.”

Bautista has a history of being demonstrative about calls he disagrees with. Here’s Buster Olney describing an incident this spring:

In the first inning of the worst spring training game ever last month, Jose Bautista took a pitch that may have been a little high, maybe a little outside, for strike two. He walked away from home plate, disgusted.

Never mind that the Blue Jays had already scored nine runs in the inning, against two young Yankees pitchers who struggled to throw strikes. Never mind that this was in the middle of the exhibition season. Bautista was mad, and he did nothing to hide it.

He swung and missed at the next pitch, striking out, and slammed his bat against the ground angrily and stomped away from home plate. To repeat: It was the first inning. The Blue Jays had just scored nine runs. It was in the middle of March.

Probably Bautista has always been like this, and we’ve just become aware of it in the past few seasons, which is when we’ve become aware of most of the things we know about Jose Bautista. But his tendency to blow up at umpires has made enough news lately that Blue Jays manager John Gibbons talked to him this spring about toning it down, for fear of reprisals. Evidently, that talk didn't take.

Bautista’s latest comments came after the Jays’ 4-1 loss to the Indians on Tuesday, in which he objected to two calls made by home plate umpire Jeff Nelson. The first was a 3-0 strike call in the third:

Bautista flipped his bat back toward the dugout and began to trot toward first base before Nelson signaled for the strike. He'd end up on first anyway after drawing an official ball four two pitches later.

In the fifth, Nelson rung Bautista up on a 3-2 slider, and Bautista made his feelings felt on his way back to the dugout:

So, did Bautist have a beef? Here’s the pitch plot for the third-inning plate appearance:

The fourth-pitch strike that bothered Bautista was outside, but barely. Pitches in that location are called strikes fairly often regardless of the count. But three years ago, John Walsh found that the called strike zone is about 15 percent bigger on 3-0 than it is across all counts. Here’s his heatmap of called strike percentage on 3-0: 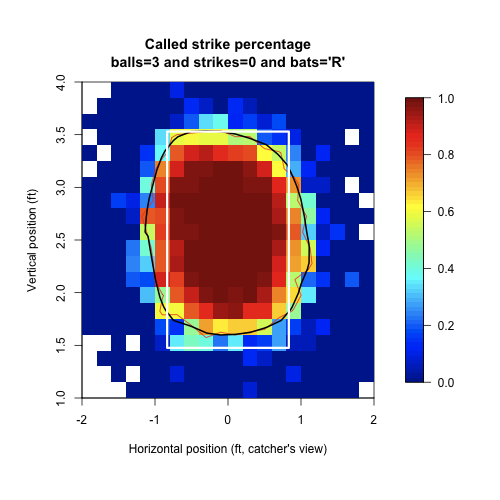 Based on that image, 3-0 pitches located where Justin Masterson’s was are called strikes about 75 percent of the time.

As for the fifth-inning pitch:

That one was probably less likely to be called a strike than the 3-0 pitch in the third, but it was within the rulebook strike zone, the standard Bautista says he wants umpires to adhere to. Neither call was worth getting worked up about. And this isn’t the first time that Bautista has complained about an okay call that went the pitcher’s way.

But Bautista has been in the big leagues for almost 10 years, and he’s seen almost 16,000 pitches. By now, you’d think he’d have come to terms with what constitutes a strike. So his why is he so angry at umpires? Is he getting squeezed more than most batters?

Actually, the stats suggest that umpires have been less inclined to call strikes on Bautista. From 2010-12, Bautista has had fewer pitches outside the zone—the actual zone, not the rulebook one—called strikes, and more pitches inside the zone called balls, than the typical batter:

Is there any evidence that Bautista—and by extension, the Blue Jays—have been paying a price for his outbursts? Not really, although it’s hard to say for sure. Bautista has been getting breaks a little less often over the past two seasons, though that’s not necessarily because umpires are exacting their revenge. Even last year, the calls against him weren’t way out of line with the typical batter’s:

Ultimately, Bautista’s blow-ups aren’t a big deal. He’s hyper-competitive, as many successful athletes are, and he’s more inclined to get upset about the occasional questionable call than the typical player. If his competitive drive is part of what makes him a productive player, then the downside—an occasional outburst about a borderline call—probably isn’t too high a price for Toronto to pay.

But someone should stick up for the umpires. Because it doesn’t look like they’ve gone out of their way to earn Bautista’s ire.

Thanks to Ryan Lind for research assistance and Andrew Koo for tipping me off to Bautista's complaints.

You need to be logged in to comment. Login or Subscribe
davescottofakron
Nice to see new content on the weekend. Thanks
Reply to davescottofakron
Mooser
I watched this series (Jays / Indians) and I thought to myself that Santana had really improved his framing. His movement is more 'quiet' then last year. Nice to see it is translating into some called strikes.
Reply to Mooser
bornyank1
Yeah, you know, Santana rated as one of the worst framers last season. I was going to mention that, but his framing in those clips didn't seem so bad. Not Molina-esque, but not terrible. Maybe I'll ask him about it when he comes to New York next week.
Reply to bornyank1
sam19041
Good stuff!
Reply to sam19041
morpheusq
Great article!
Reply to morpheusq
JoeLamp
New to this site, outstanding analysis.
Reply to JoeLamp
bornyank1
Thank you. Welcome to BP!
Reply to bornyank1