Results in the first week of the season can be volatile, especially on the mound, where many pitchers are still getting themselves into game shape. It is common to see velocities that are lower than peak, a higher frequency of mistimed deliveries, and strict pitch-count limitations as teams ease their aces into the new season.

This opening week was gratifying for those fantasy managers who invested in top-tier pitching on draft day, with a plethora of shutdown performances coming from the top-ranked players on the mound. The near-perfection of Yu Darvish was expertly covered by the Baseball Prospectus team earlier this week, and though his stat line was certainly aided by his facing the American League's weakest lineup, the performance was a positive indicator that Darvish's late-season success of 2012 will carry over into this season.

While Darvish was a bit of a wild card heading into the season, the top arms on the draft board generally represent the lowest risks, and the elite aces did not disappoint in the first week of 2013. Leaning on Paul Sporer's fantasy rankings of MLB starters, check out the opening performances of the game's best pitchers:

The quartet combined to allow just two runs over a total of 27 innings for a cumulative 0.67 ERA, including 21 strikeouts against just four walks. Aside from the diminished strikeout rate, these elite hurlers outperformed even their own lofty standards. The finer details of each outing reveal some of the nuances that exemplified each player's performance.

Verlander was 0-for-5 in his quest for an Opening Day victory, stretching back to 2008, but on Monday he finally walked away with the big W in game one. Despite the success in the win column, Verlander was off his game against a light-hitting Minnesota team. His average velocity of 92.5 mph was two-and-a-half ticks below his 2012 average, but there were multiple conditions that conspired to shrink his readings on the radar gun. For starters, the game-time temperature at Target Field on Monday was a chilly 35 degrees, with players bundling up in layers while exuding clouds of visible breath, and cold weather acts to take some of the heat off of a pitcher's fastball.

Verlander is also known for building velocity as the game wears on, reaching back for his hardest stuff as he breaches the 100-pitch barrier, but the right-hander vacated the mound before he reached the century mark on his pitch count. Verlander's velocity was such that the Gameday algorithm may have blurred the lines between his fastball and change-up, considering the 53 cambios that were identified by PITCHf/x.

Both of the above pitches were dubbed change-ups by Gameday, two of six thrown to Ryan Doumit in a seven-pitch at bat. Verlander was generating fewer swings-and-misses than usual, with an 8.8-percent whiff rate for the game as compared to his 2012 mark of 12.7 percent, but such is to be expected when facing a Minnesota Twins lineup that had the lowest strikeout rate in the American League last season. All told, his seven strikeouts in five frames were a point in Verlander's favor, and though his balance was a bit soft, the overall mechanics were in pretty good shape for Opening Day.

I fawned over David Price this offseason, admiring the consistent improvement to his stats, his stuff, and his mechanics over his five-year career. The southpaw's inaugural start of 2013 was a mild disappointment, given the handful of extra baserunners and the dip in average velocity, but Price is right on track to repeat his award-winning performance of 2012. The lefty averaged 94.4 mph on his sinker in his first outing of 2012 (against the Yankees on April 7), which compares favorably to his pitch speed on Tuesday, and his month-to-month velocity numbers from last year reveal a trend that is common among starting pitchers over the course of a season:

Price increased velocity throughout the first half of the year, gaining more than two full ticks between his first start and his June average and settling in above 96 mph for the final three months of the season. I expect him to display a similar trend this season. Price’s fastball peaked at 96.5 mph in his start against the Orioles. He went to the well for fastballs on two-thirds of his pitches, but it was a dirty curve that generated the best whiff of the day:

Clayton Kershaw picked up 2013 where he left off in 2012, beating the rival San Francisco Giants in front of the home crowd at Chavez Ravine. He appeared to be unaffected by the hip problems that cropped up in September of last year, and the walk-free outing was yet another indication that he’s turned the corner with his pitch command, having harnessed his complicated timing pattern to find a consistent release point. The southpaw scattered four harmless singles across nine shutout innings of efficient pitching, averaging just over 10 pitches per frame, and he encountered just a pair of three-ball counts in the contest (both in the first inning). He used the fastball to get ahead in the count and then leaned on the breaking stuff when he got two strikes on the hitter.

Kershaw’s average fastball velocity of 93.0 mph was within spitting distance of his average velo in 2012, and it represented an improvement over the 89.8-mph average that he put up in his first start last season.  Kershaw's velocity held relatively firm throughout 2012, reaching 92.7 mph in his second start and averaging between 93.5 and 94.2 mph in each individual month of the season. All indications from Tuesday are that he has already settled into his mid-season velocity. Most impressive was Kershaw's improved posture, which had earned a grade of 40 when I evaluated him last August, but which graded out as average on Monday despite occasional inconsistencies. 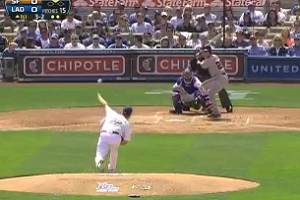 Kershaw is also getting a knack for extra-curricular activities on the field, ranging from his circus catch of 2012 to Monday's deep fly against George Kontos.

Kershaw led off the home half of the eighth inning with this solo shot to dead center field on the first pitch that he saw from Kontos, plating the first run of the ballgame and sparking a Dodger rally that gave him a four-run cushion heading into the final frame. It was the first homer of Kershaw's career, spanning 335 plate appearances, and just the second time that one of his hits went for extra bases.

Strasburg won the Opening Day lottery, drawing the Quadruple-A Marlins in his first start of the season. It was a match-up that teased double-digit strikeout totals, but Strasburg flipped the script with a clinic on inducing grounders to generate quick outs, as five of his first six outs came on the ground. His fastball was parked between 94 and 98 mph throughout the game, and he sat on the heat for 65 percent of his pitches. Oddly, Stras induced just two empty swings in the entire ballgame, as he was generating weak contact early in the count. Only three of the first 15 outs were recorded via the air, and two of those flies were courtesy of the flyball-philic Giancarlos Stanton.

The strategy was a win-win for Washington, as the right-hander's efficiency allowed him to eat up seven innings in just 80 pitches. Although some questioned Strasburg’s removal after seven, in light of his pitch count, the strength of the Nationals' bullpen made it easier to pull him in a 2-0 ballgame. Bryce Harper supplied the offense with a pair of solo homers, proving that the future is now in D.C.

Always a hot topic, Strasburg's delivery looked great on Monday, with excellent repetition, sturdy timing, and no apparent signs of elbow drag. Now two years removed from Tommy John Surgery, it will be exciting to watch if Strasburg can recoup the final pieces of his pre-injury mechanics. His posture was a bit weak in his first start, but his velocity was already sitting at 2012 levels, and steady growth will have him hitting triple digits by the summer. Strasburg looks ready to contend for the NL Cy Young Award this season, and is poised to be the favorite for the hardware heading into 2014.

Read yesterday that Ubaldo Jimenez had hit 95 mph in his start vs. Toronto. Would he be a worthy candidate for re-examination? Is the up-tick real and, if so, is there a mechanical cause that you can detect? Thanks.
Reply to pobothecat
dantroy
Probably happened too late for your article, but how about Cliff Lee's outing last night against a tough Atlanta lineup? Does anyone have better command than Lee?
Reply to dantroy