The Thursday Takeaway
Mariners general manager Jack Zduriencik spent most of the offseason searching for power bats that could supply a jolt to his lineup, which ranked dead last in the league with a 665 OPS in 2012. Along the way, he brought back Michael Morse—whom he had shipped out for Ryan Langerhans in 2009—from the Nationals. And, though most preferred Washington’s end of that three-way deal at the time, four days into the regular season, Zduriencik is looking mighty shrewd.

The first Mariner to four home runs last year was Jesus Montero, who reached that benchmark in the team’s 24th game. Morse, who hit 31 homers in 575 plate appearances for the Nationals in 2011 and nine in 66 trips to the box this spring, needed one-sixth that many, averaging a long ball per game in the opening series, which ended in a 2-2 split.

By going deep twice on Tuesday and once each on Wednesday and Thursday, Morse became the only Mariner besides Ken Griffey Jr. to accomplish the four-homers-in-the-first-four-games-of-a-season feat. Of course, Griffey, who led the Mariners (and the league) with 56 home runs in 1997, added a fifth shot in game five, so Morse will need to send one out of U.S. Cellular Field in tonight’s matchup with White Sox lefty Jose Quintana in order to keep pace (8:10 p.m. ET).

Morse might also need at least one more big fly to retain the major-league lead, because Orioles first baseman Chris Davis is hot on his trail. Davis, who smacked a career-high 33 homers last year, has resumed his power surge out of the gate, and he now has 10 taters to his name in his last 10 regular-season games. You read that correctly, and it’s a franchise record.

Moreover, thanks in large part to his three big flies, Davis drove in a league-high 11 runs over the Orioles’ first three contests, paving the way for Baltimore’s series win over the Rays. In doing so, he became only the second player in major-league history with at least three homers and 11 RBI in his team’s first three games, and accounted for more runs than 12 whole teams did in their opening series.

Next up for Davis and the Orioles: the home opener at Camden Yards, where the 27-year-old authored 22 of his 33 homers last year, and where he will face Twins righty Liam Hendriks on Friday. Davis could hardly ask for a more favorable opponent in his bid to extend his homer-per-game streak to 11, considering that Hendriks coughed up 17 gopher balls in 85 1/3 innings of work last year (3:05 p.m. ET).

Matchup of the Day
Zack Greinke will make his Chavez Ravine debut this evening against the Pirates, a familiar foe with which he tangled five times during his season and a half with the Brewers. In his most recent outing versus Pittsburgh, on July 13, 2012, the Brewers handed Greinke a 3-0, first-inning lead, only to watch their ace cough it up in a four-run fourth. Second baseman Neil Walker provided the heaviest blow in that Pirates rally—a three-run homer with two away in the inning—thereby earning today’s Matchup nod.

Many of the Pirates’ biggest bats struggled to solve Greinke in their meetings. Andrew McCutchen went 3-for-15; Garrett Jones went 2-for-15; and Pedro Alvarez went 1-for-10. Meanwhile, newcomer Russell Martin brought an 0-for-6 line with him from the Bronx. But Walker, who hit 14 homers in 530 plate appearances last year, fared much better, going 4-for-14 with three extra-base hits, two of which cleared a fence.

The 27-year-old Walker’s hitter profile reveals an intriguing element to his power, which in turn helps to explain his success against Greinke. 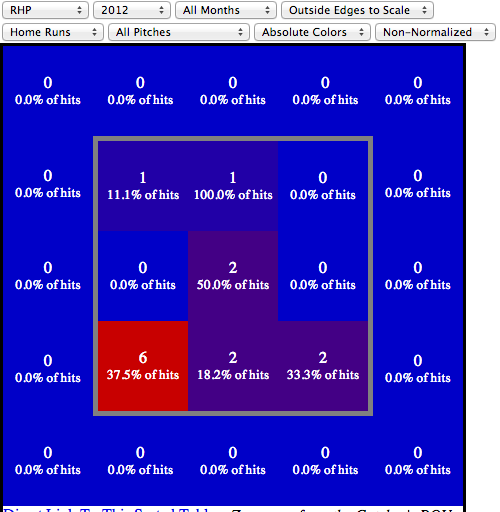 In particular, the switch-hitter’s preferred gopher-ball location against right-handed pitchers appears to be low and outside—a spot to which northpaws often throw with the specific aim of avoiding home runs when whiff-prone hitters, like Pedro Alvarez, are in the box. The fateful pitch to Walker last July, a 1-0 curveball that followed another bender off the outside edge, had a bit of hangtime, but the resulting big fly seems much more a product of Walker’s particular skill set than of Greinke’s location mistake.

As illustrated by the spray chart above, from TexasLeaguers.com, 11 of Walker’s 14 home runs last year—all 14 of which, by the way, came off of right-handed pitchers—landed well to the right of center field. Two of the remaining three went to dead-center field, and one sliced just inside the pole in the left-field corner. Thus, despite his odd location preference, and notwithstanding the July 13 homer, Walker’s left-handed power is primarily to his pull side.

Kevin Goldstein mentioned in his 2009 review of the Pirates farm system that Walker is “prone to chasing pitches both low and away,” perhaps in part because of struggles with pitch recognition. It’s interesting to note, then, that all six of the down-and-away home runs came on breaking pitches. And so, incidentally, did the solo shot that Greinke served up to Walker on May 15, 2011, which came on a 3-2 slider, the 11th delivery of an impressive at-bat.

If Greinke turns to his breaking pitches with Walker at the plate tonight, he would do well to keep them either below the knees or off the outside edge. That approach yielded this three-pitch strikeout in the at-bat immediately preceding the July 13 homer, and Walker’s profile shows that he was still vulnerable to it as recently as last year.